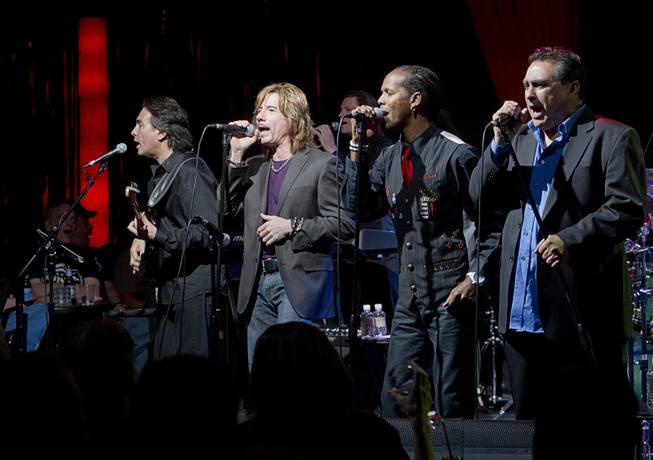 Santa Fe & The Fat City Horns, shown here performing at the Palms in 2012, remains one of the most popular bands in Las Vegas.

Learning new skills has become standard operating procedure for most of us during the pandemic. It’s no different for the many talented musicians making a living in Las Vegas.

For Jerry Lopez and his band Santa Fe and the Fat City Horns, adjusting to a new, temporary existence with live performances meant building a new way to spread their music to the masses. The result is a livestream concert taking place every other Monday, broadcast from the Copa Club at the Bootlegger Italian Bistro just south of the Strip on Las Vegas Boulevard.

The band posted its eighth show, featuring guest vocalists Clint Holmes and Noybel Gorgoy, on January 18 and next up is a February 1 performance at 6 p.m. The “ticket” price is $15 and you can find the music and more info at santafeandthefatcityhorns.com/live.

Lopez, who founded the group in 1999, says the Monday night gigs at the 200-seat Copa Club were rolling right along when COVID shut down live entertainment in Las Vegas.

“Suddenly video became our world, really for all musicians and entertainers, and we all were learning more about lighting and streaming,” he says. “We started figuring out how we could socially distance 15 musicians and how we could capture them all on video, and it took us several months of testing and working on all that stuff. I almost gave up a couple times because I didn’t feel like it would be up to snuff. I would rather leave people with … the live performances they saw than put something online that is less than that.”

The big band known for its high-energy shows, musical versatility and thunderous horn section has been one of the most popular lounge and showroom acts around the valley’s various venues for years. In order to create the best possible online audio experience, Lopez and company enlisted the help of engineer and studio pro Bob Lentini of RML Labs.

“Bob is a genius. He wrote the software for a program called SAW (Studio Audio Workshop) which is a digital audio workstation like ProTools but way before any of that stuff,” Lopez says. “So we ended up bringing him in and aside from him being a brilliant sound engineer, he’s a good friend and he mixes all our shows.”

Since current capacity restrictions won’t allow for an appropriate audience size, the Santa Fe crew took over the entire Copa Club space, spreading out the “stage” and bringing in additional gear to create a fully functional space for the livestreams. Now there is a director, a tech specialist, eight cameras including a hand-held perspective, and a separate audio room with another two crew members.

The band has received offers to perform elsewhere in front of limited crowds but “it just wasn’t going to feel right,” Lopez says. “We didn’t feel safe. The way we’re doing it now, the places where we can’t have six feet of distance, we have plexiglass between the singers and musicians.

“And normally, I like having people right up against the stage. We feed each other energy. So we thought, let’s just waiting and we’ll go back to live shows when we can have a full audience, and in the meantime, we’ll hone our skills on all this technical stuff and then we’ll be able to continue to livestream these shows.”

Video production isn’t the only new lesson for Santa Fe and the Fat City Horns. The band members have been educating themselves on social media marketing and promotion as well, and “that’s been the hardest thing, aside from the technical aspects of putting on a show,” Lopez says. “We still have to get the show in front of people and find new fans. That’s a constant thing we’re working on all the time. But we’re the kind of guys that when there’s not a gig, we make the gig. We’re not sitting around.”