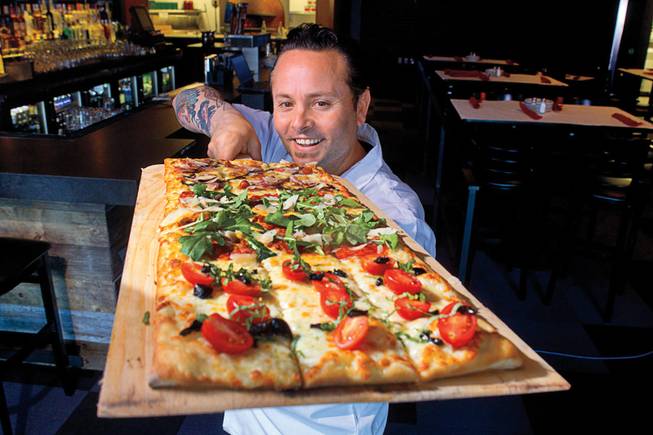 Rock solid: Tony Gemignani’s Pizza Rock is one of the most popular pizzerias in the Valley.

Although their restaurants may compete against each other as businesses, many of the Las Vegas Valley’s elite pizza makers are good friends behind the scenes. Some even collaborate frequently and travel to conventions, competitions and festivals across the country.

It was one of those trips that inspired this weekend’s inaugural Las Vegas Pizza Festival, set for Saturday, November 16 at the Industrial Event Space just east of Interstate 15 near Sahara Avenue. 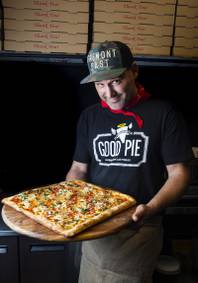 Good Pie owner Vince Rotolo traveled to Los Angeles with Metro Pizza co-founder John Arena for a pizza festival and the experience inspired the two local operators to help get the ball rolling — or maybe get the dough rolled out — for an event in Las Vegas.

“We were driving back and we stopped at the Mad Greek [Café in Baker, California] and we were just sitting there and John said, ‘We can do this in our city. We have enough talent,’” Rotolo said. “What we saw at that festival was a really interesting mix of pizza makers from all over the country, but John thought we could actually do this with all Vegas pizza makers, because we really want to showcase all the diversity and variety of styles of pizza being celebrated in our city.”

Attendees will feast on unlimited sample slices with general admission tickets priced at $45. VIP tickets are $85 and include early entry at noon and complimentary beer and wine. Tickets and information are available at vegaspizzafest.com.

Rotolo said the local pizza scene is strong because of the efforts of its leaders, longtime operators like Arena, who created Metro Pizza with his cousin Sam Facchini in 1980, and Tony Gemignani, the award-winning pizzaiolo and restaurateur based in Northern California who opened Pizza Rock in downtown Las Vegas in 2013.

“I grew up in a neighborhood where the pizza place was something special, a meeting place, and I want to give my community here what I had growing up,” Rotolo said of his Good Pie, which is open at downtown’s Pawn Plaza and will soon expand with a larger location. “Pizza culture is growing and changing a lot here and there a lot of different factors that come into play. The Pizza Expo being here is one of them, but really it’s the leades like John and Tony who embrace other pizza makers and support us, and go out of their way to share knowledge with somebody like me who’s relatively new to the scene.”

Gemignani also helped organize the Las Vegas Pizza Festival and said it was important to be part of it.

“Vegas has pretty damn great pizza. You don’t have to go to New York or L.A. to get all these different kinds [of pizza] and maybe 10 years ago you couldn’t say that,” Gemignani said. “This festival is a group of independent operators coming together to celebrate what we love. I hope we get a lot of people out to see how special it’s going to be.”

Pizza Rock’s Laura Meyer, a three-time World Pizza Champion and this year’s Caputo Cup Champion, will be at the festival’s special Women in Pizza booth with Nicole Bean of Pizaro’s in Houston, Texas, and Audrey Kelly of Audrey Jane’s in Boulder, Colorado. Those three pizza makers will be showcasing their own signature styles while Scott Wiener, star of Thrillist series “Really Dough,” will serve as the event’s emcee and other guest stars include 10-time World Pizza Champion Nino Coniglio and pizza tossing champ Scott Volpe.