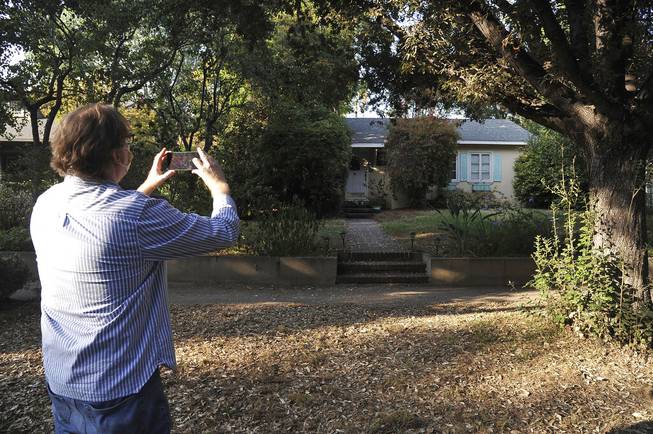 PASADENA, Calif. — The childhood home of Eddie Van Halen and a sidewalk outside a nearby liquor store have been turned into memorials to the legendary rock guitarist in his adopted hometown near Los Angeles.

The shrines began popping up shortly after Van Halen’s death from cancer at age 65 earlier in the week. The tributes have continued to grow and attract a steady stream of visitors day and night.

Van Halen was born in the Netherlands, and moved to Pasadena, California, with his parents and older brother Alex when he was 7.

A couple dozen people milled about the nondescript yellow house on Las Lunas Street on Friday, swapping memories and snapping photos of the flowers and old photos of the guitar virtuoso.

“This way people have a chance to come out and share their feelings,” said Jackie Gibson, whose younger brother was childhood friends with the Van Halens. “We need that right now. We really haven’t had a chance to celebrate with everything being closed down. It’s a time people can come together and heal.”

A pickup stopped in front of the house and its overgrown yard and cranked Van Halen’s music, fittingly shattering the quiet on the otherwise neatly kept block. A shed where the brothers practiced still stands in the fenced-in backyard. They continued living at the house, which is now a rental, for a couple of years after their eponymous debut album came out in 1978.

“It’s heartbreaking because he’s such a part of our lives,” said Paige Uranga, a 53-year-old fan from nearby Alhambra. “It’s a soft, deep ache compared to all the other really sharp like knife aches we’re experiencing.”

A couple blocks away, Salvadore Franco was compelled to stop outside the liquor store and view the display of a guitar, photos, candles, beer cans and pack of cigarettes. Local legend has it that Eddie and Alex wrote the family name in wet cement on the curb, which is still visible.

In 1968, Franco and the Van Halens delivered the Pasadena Star-News on different routes. He recalled Eddie tossing papers from his Stingray bike with banana-shaped handlebars.

“He worked hard because he had to buy his drum set,” Franco said. “He was always smiling, that’s what I remember. Friendly, sociable, he’d walk by and say, ‘How ya doing?’ ”

Franco, in a Van Halen T-shirt, said he went to Pasadena High and what was then called Pasadena Community College with the brothers. He attended some of their earliest performances in local backyards and at the Pasadena Civic Auditorium.

The Van Halens formed their first band, The Broken Combs, at Hamilton Elementary and played at lunchtime. Eddie remembered his early days there as being “absolutely frightening.”

“Since we couldn’t speak the language, we were considered a minority,” Van Halen said in a 2017 interview at The Smithsonian’s National Museum of American History. “My first friends in America were Black. The white people that were the bullies, they would tear up my homework papers. The Black kids stuck up for me.”

Gibson said her younger brother, Jack, had his own band at the same time the Van Halens were in a band called Mammoth. Jack asked them to play at his backyard party.

“It was two dollars for a kegger for Van Halen,” she said, laughing. “There were over a thousand people there.”

Gibson said police used helicopters to herd the partygoers out of the yard and down the street to disperse.

Word of Eddie’s death brought her memories flooding back.

“He seemed like a very humble down-to-earth type of fellow, not pretentious, like fame really didn’t get to him,” said Gibson, whose family also is Dutch. “He still had that feeling in his soul of being down to earth. Dutch people are like that.”

The first rock album Uranga purchased was “Van Halen II” in 1979 and she quickly memorized all the words.

“It’s just painful when you’re left here and all your idols are gone, all your heroes,” she said. “He was a hero.”