I want to show you something,” Luis Varela-Rico, 38, says, walking toward one end of the narrow room at PublicUs, where his large steel sculpture of a human hand—titled “Organic Study #1”—has hung since the Downtown coffeehouse purchased it a few years back.

He lightly pushes the steel slices comprising the hand, so that they swing back and forth and soon the piece vibrates with life. The metal artist originally constructed it for Clark County’s art program, which offered an $800 stipend. He spent almost $5,000.

It’s about taking risks, he explains. That’s how Varela-Rico found himself on the inaugural season of the 2021 Netflix original Metal Shop Masters, a show on which a group of metal artists compete to make the best sculptures, in hopes of winning the title of Metal Shop Master and $50,000. (Without spoiling the ending, we’ll just say he held his own.)

Varela-Rico says had no idea what was in store when he responded to an agency that reached out to him via Instagram to inquire about his skills. It wasn’t until he arrived on set in LA and laid eyes on the cameras, equipment, and—most importantly—Jo Koy that the gravity of the moment hit him. Koy, one of Varela-Rico’s favorite comedians, hosts the show. 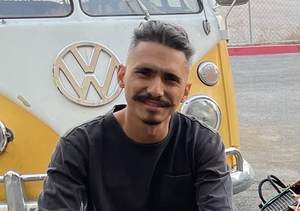 Originally, Varela-Rico says his aversion to cameras almost caused him to pass on the competition, but his uncle convinced him it could be a great opportunity.

“I was really worried about misrepresenting who I was,” Varela-Rico says. “[But] ultimately, it took up so much of my energy to just try to work in the time frames that they were giving us and try to create something that I wasn’t going to be embarrassed about.”

Varela-Rico is being modest. He and his peers from the show are profoundly gifted artists. In just the first challenge, they were asked to create an avatar of themselves in a limited time frame, and the results were phenomenal. One produced a robot, another an intricate set of wings, a third an armored bird emerging from an egg. Varela-Rico—who was born in Guadalajara, Mexico (he has been a Las Vegas resident since elementary school)—tapped into his culture to create a 250-pound Día de los Muertos skull.

That artwork was created the way many of his pieces are: He designs on computer-aided software, cuts the necessary parts on computerized numerical control machines and then assembles the artwork through a process that includes welding.

The metal artist had momentarily lost steam after he left UNLV. He had received his associate’s degree from the College of Southern Nevada before transferring over—with the intention of earning a bachelor’s degree—but became “disillusioned” with the UNLV art program. Instead, he began pursuing a career as an elevator technician, now his day job. Then he became inspired to create.

“Back when Shepard Fairey and Banksy were exploding—when the street art scene blew up—I wanted to hop on and get some momentum,” he says. “So I started doing guerrilla sculptures, because no one was really doing 3D when it came to street art.”

In 2011, Brett Sperry, owner of Downtown’s Brett Wesley Gallery, noticed him and offered to represent him. “That was the genesis of me taking it seriously, because someone took me seriously,” Varela-Rico says.

Why did he need permission?

“I think it’s a cultural thing,” Varela-Rico explains. “I think Mexican people lack a lot of self-confidence sometimes. And that’s supported by a family that doesn’t necessarily not support them, but doesn’t support dreaming really, really big.”

Sperry, who repped Varela-Rico through 2012, still praises his artistry. “Luis has worked tirelessly, and with great passion for a solid 14-plus years,” Sperry says. “It is [a source of] great pride to see him recognized as a strong voice in contemporary sculpture today.”

Varela-Rico typically begins his days at 5 a.m. and works until 2 p.m. After that, he heads into his workshop and focuses on his art. His dedication has begun paying off.

He has four art installations in the Vegas Valley. Along with “Organic Study #1,” he made “Norte y Sur,” a pair of large steel heads located on Eastern Avenue just south of the 215; “Organic Study #2,” a 15-foot sculpture of a hand gripping a baseball, at the Desert Diamonds Baseball Complex in Mountain’s Edge Park; and “Radial Symmetry,” two large steel sculptures inspired by Southern Paiute basket weaving, in the Arts District Downtown.

“The city propping up local artists is important,” Varela-Rico says. “When I think Chicago, I think Cloud Gate—Sir Anish Kapoor’s chrome bean. It helps the identity of the city, and it helps people that are from the city be proud or at least feel like they have culture.”

Most recently, Varela-Rico teamed with Meow Wolf and Goodwill to celebrate International E-Waste Awareness Day with an electronics donation drive at Area15. His contribution was a one-of-a-kind desert tortoise electronic-waste sculpture. The metal artist also recently lent a hand to “Mothers of Gynecology,” a monument project that is headed up by Alabama-based artist and activist Michelle Browder and is dedicated to enslaved 19th-century Black women.

All this feels like just the beginning for Varela-Rico. The metal shop master says he’s been contacted by some big names, like Ronald McDonald House and Starbucks. Beyond that, he has one personal goal ahead of him—sleeping in.

“For a while, I’ve been defining success as [the option to] choose when you can wake up. Right now, I do not choose,” he says. “Success would be full-time art … owning my own shop and continuing to be able to explore freely as an artist.”