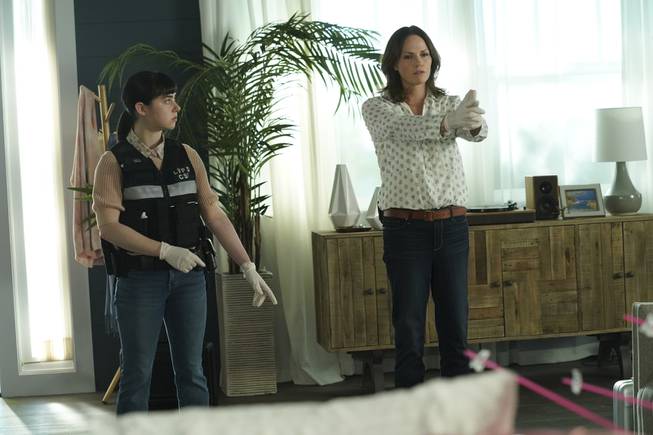 Actress Sarah Gilman has been preparing for her newest role seemingly all her life.

Admittedly a lifelong fan of crime procedurals, she can recall nearly any scene from crime-drama classics like “Bones” or “Criminal Minds.” Now, Gilman — who has primarily acted in television comedies — is playing the role of rookie investigator Penny Gill in the CBS reboot of “CSI: Vegas.”

And she recently got some real-world experience.

Gilman spent several days in Las Vegas earlier this month and got to sit in on a criminal-justice class at UNLV, and participated in a ride-along with Metro Police’s Crime Scene Investigations unit. With Metro, Gilman was able to shadow analysts as they responded to real-life calls throughout the valley. She showed up at 6 a.m. for the day shift with Starbucks in hand to tour the crime lab and watch as investigators collected evidence from several scenes.

“The ride-along was really, really amazing,” Gilman said. “You can’t really fully prepare for the type of work that CSAs (crime scene analysts) do every day.”

Gilman had plenty of exposure to Las Vegas before accepting the role, too. As a film and television production student at the University of Southern California, the 25-year-old Los Angeles native said she would take weekend trips to the Strip.

Then, during the pandemic, she started dating somebody who lives in town. Ever since, she’s been talking like a local.

“We would go to Chinatown or the Arts District or Fremont to just go to galleries or get food,” Gilman said. “So we actually spent very little time on the actual Strip itself.”

Among the calls Gilman got to ride along for, investigators worked in the aftermath of a shooting, a burglary and a fatal crash, Metro CSI Director Kristin Grammas said. Gilman also got to sit in on the unit’s morning briefing, which discusses any crimes happening in the valley or calls that haven’t been handled yet, as well as toured the Clark County Coroner’s Office.

“We showed her how it really is,” Grammas said.

Metro’s crime scene analysts, as well as most real-life CSIs, differ from the show in that their primary job is to collect evidence from a crime scene and document it, Grammas said. On television, it’s common to combine several jobs into one like in the CSI franchise, where characters also analyze the evidence in forensic labs, conduct DNA sequencing and interview suspects of a crime.

Grammas, who took over as director about six months ago, has been with Metro’s crime scene investigations unit for 19 years. Grammas started pursuing her career just before the original CSI debuted, but since the show exploded in popularity, they make it a point of emphasis to explain how their job differs from what’s on TV.

That, Grammas said, is the CSI effect. But overall, the show has shined a light on an otherwise grim profession.

“I think that it highlights our position, which is great, because very few people really understand what we do,” Grammas said. “People think we do exactly what the people on the show do, so when we go and testify in court, we actually have to tell them the difference between our job and what they do on the show.

“But I think it’s great. I love it because it’s letting more people understand what our CSI people do.”

Daniel Holstein, the UNLV criminal justice professor whose classes she observed, is also an adviser for the show. He worked as a crime scene analyst for Metro for 25 years before retiring in 2015, he said.

In that time, Holstein was able to build a relationship with Anthony Zuiker, creator of the original “CSI” while he was in town researching for the show in 1999. The two became friends and Holstein advised actors and writers on the original series of proper techniques that real-life crime scene investigators use.

Holstein has since reprised his role for the reboot, while maintaining his role as an instructor at UNLV. He’s the one who encouraged Gilman to come out, he said, to gain the invaluable experience of learning from professionals.

“During the original stint, I had a lot of the actors and writers come out,” said Holstein, also a UNLV alumnus. “All I heard was good things about it and how it made them better in their role of acting as a CSI. It gave them a sense of reality rather than on TV getting a sense of realism. And that was very important.”

For Gilman, the chance to learn up close from the professionals showed her just how technical the job really is. That’s a quality she wants to bring back with her to the set.

“We went to a burglary, and I was asking why they were using one fingerprint powder instead of that one,” Gilman said. “It was just really interesting also seeing some of the evidence they were looking for and some that you just don’t need, where in the show they’ll go through every inch of the crime scene looking for everything.”

One of the most important takeaways for Gilman, she said, was watching the crime scene investigators work through “grueling” emotional and physical conditions. The weight of the job and talking with people on what might be the worst days of their lives didn’t really register until she saw it unfold in real time, Gilman said.

On top of that, if an investigator is responding to a call, it might be hours before they’re able to eat or even go to the bathroom. And the Las Vegas heat is no slouch, either.

“Las Vegas gets hot, and they’re in full pants and boots and a vest every time they go out there,” Gilman said. “You’re coming face-to-face with the worst parts of society. And there is that reliance on the graveyard humor and some things that wouldn’t be ‘appropriate’ elsewhere.

“Those are the things you rely on at the scene to keep fighting to get through.”

Another thing Gilman hopes to bring back to the set is the sense of camaraderie she saw while visiting Metro. One of the first things she noticed walking into the crime lab were bulletin boards with positive messages to encourage staff.

“They really are a family and it’s so beautiful to see,” Gilman said. “They know each other’s families and they probably spend more time with each other than they do with their families.”

As for her role as Penny Gill, Gilman debuted in the reboot’s second episode and appears periodically throughout the season, she said. Penny gets to learn from Sara Sidle (played by Jorja Fox) and Gil Grissom (William Petersen), and starts to see Maxine Roby (Paula Newsome) as a mentor.

Believe it or not, Holstein said that as a token of appreciation for helping out the show, Zuiker, the show’s creator, based Gil off Holstein.

“It’s a show about entertainment,” Holstein said. “The way they put the show together, the way the characters act, the science — it’s phenomenal.”

Gilman, above all else, is excited for viewers to see how the show stacks up with the original, which ran from 2000-2015.

“I think a lot of the scenes are that fun type of play on the old and the new — and a more emotional range aside from the technology,” Gilman said. She also hopes to show the side of Vegas she’s become familiar with.

“I think it’s really cool to be bringing Vegas back to the screen on an ongoing basis,” she said. “There’s a lot of opportunities to share the characters in their day-to-day lives and show that other side of Vegas like the great food, the amazing art galleries and the cool places to hang out.”