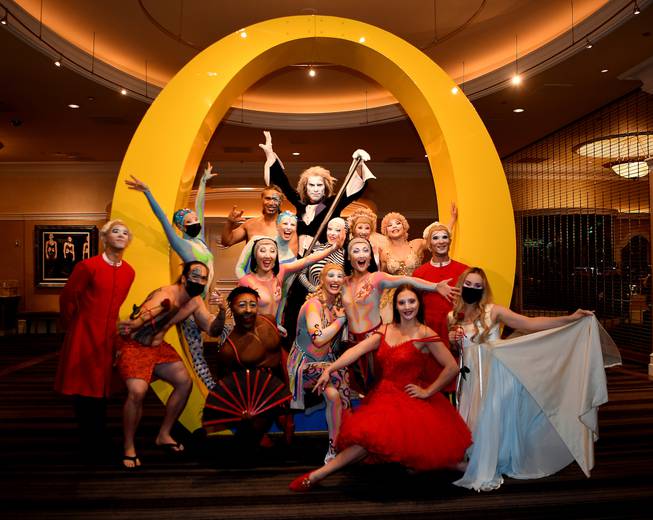 Cast members from “O” celebrate before the show’s reopening performance at Bellagio on July 1, 2021.

Last week was nothing short of historic for Cirque du Soleil, MGM Resorts and the Las Vegas Strip in general. Cirque reopened its two longest-running production shows in Las Vegas after 16 months away from the Strip stage, “Mystére” at Treasure Island on June 28 and “O” at Bellagio on July 1.

“For the past 16 months, we’ve waited patiently to reignite the heartbeat of Las Vegas with our large-scale shows, sporting events and nightlife, and this weekend marks a major milestone for the full recovery of our city,” Bill Hornbuckle, MGM Resorts CEO and President, said last week. “Millions of people travel from around the world to experience the unique entertainment only Las Vegas offers, and with the return of names like Bruno, Chappelle and Cirque, we are letting them know it’s time to come back.”

MGM’s big events continue this coming weekend with more performances from Chappelle and Mars, USA Basketball training camps and exhibition games at Mandalay Bay starting on July 6, Dwight Yoakam at Mandalay Bay Beach on July 9 and UFC 264 at T-Mobile Arena on July 10. Beyond its venues, there is, of course, one of the biggest concerts of this or any other year, Garth Brooks at Allegiant Stadium on July 10, not to mention Justin Bieber playing for one night only at Encore Theater at Wynn on July 9.

Prepare for battle when you see Tournament of Kings.

But the cavalcade of returning Strip production shows isn’t letting up either. Illusionist Criss Angel’s “Mindfreak” is up next, reopening in his customized, high-tech theater at the Planet Hollywood Resort on July 7. “Tournament of Kings,” the longest running dinner show in Las Vegas with all the medieval mayhem you could ever want, will return to its stadium-style showroom at Excalibur on July 14.

Smaller-scale shows at Caesars Entertainment properties follow those landmark productions, including “Potted Potter” at the Magic Attic at Bally’s on July 18; “Menopause the Musical” at Harrah’s Cabaret on July 22; and the still-very-new “RuPaul’s Drag Race Live” at the Flamingo Showroom on August 5. That show, inspired by the phenomenal TV competition series of the same name, made its debut on the Strip in January 2020 before its momentum was chopped by the pandemic shutdown.

“We are so thrilled that ‘Potted Potter’ will continue to enchant and entertain audiences in Las Vegas, as it celebrates 15 years since first being performed at the Edinburgh Fringe,” said that show’s producer, James Seabright, in a recent statement. The Harry Potter-themed satire opened two years ago and quickly struck a chord with audiences of all ages. “To be able to be back up and running and returning to the stage to make audiences laugh again is a thrill for our entire cast and crew.”

Cirque will bring back two more of its blockbusters next month when “Michael Jackson ONE” returns to Mandalay Bay on August 19 and “The Beatles LOVE” comes back to the Mirage on August 26. After that, a wildly popular male revue will be back onstage in a new venue when “Magic Mike Live” opens at the Sahara on August 27.

Coming up quickly in the musical residency world, Usher launches his new show at the Colosseum at Caesars Palace on July 16, Carlos Santana returns to the House of Blues at Mandalay Bay on August 25 and Keith Urban is back at the Colosseum on September 17. Barry Manilow, Gwen Stefani, Sting, Rod Stewart and Shania Twain return to their Strip headlining gigs in the fall and winter and other superstar productions from the likes of Lady Gaga, Aerosmith, Cher, and Reba McEntire with Brooks & Dunn are expected to announce comeback dates in the coming months.

There’s a robust roster of production shows still set to return to their home venues that haven’t released performance dates yet, including “KÁ” at MGM Grand, “Opium” at the Cosmopolitan, “Sexxy” at Westgate and “WOW” at the Rio. And there’s another group of shows expected to reopen at different venues, including: Wayne Newton’s long-running musical residency; perennial favorite female and male revues “Crazy Girls,” “X Rocks” and “Chippendales”; hard-rocking musical productions “Tenors of Rock” and “The Bronx Wanderers”; and the comedic “Sex Tips for Straight Women from a Gay Man” and “Friends: The Musical Parody.”

Some of those shows will see action beyond Las Vegas this summer. “Friends” will open at the Circus Maximus Theater at Caesars Atlantic City on August 1 as the first production in the “Vegas Boardwalk Live” series, which will also feature “Tenors,” “The Bronx Wanderers” and hypnotist and comedian Anthony Cools, formerly a resident at Paris Las Vegas.