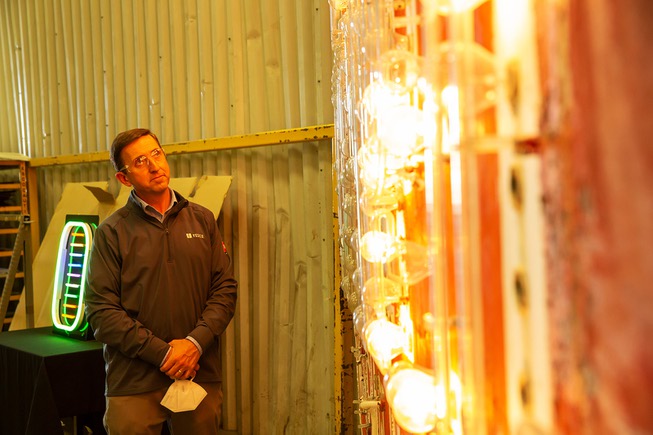 Jeff Young, senior vice president and chief marketing officer of Yesco, shows off a sign that is being worked on at the company’s warehouse in Las Vegas, Friday, Oct. 29, 2021.

When Eric Elizondo repairs the Welcome to Fabulous Las Vegas sign on the Strip, he doesn’t just keep the city’s most beloved icon standing.

Elizondo is a third-generation “neon bender,” following in the steps of his late father who was one of the artisans credited with building and installing the sign in the late 1950s.

The elder’s specialty was shaping the glass tubes filled with neon gas and electrified to create the evocative glow that bathed the emerging desert oasis. It continues to live strong now despite the dwindling number of neon craftsmen.

Now 65 years old and looking at retirement in about a year, Elizondo is one of only three benders left at Yesco’s Vegas shop and among only 10 in the company nationwide — out of almost 1,000 Yesco employees. A few years ago, Yesco had about 30 benders, he said.

The room where Elizondo’s workbench sits at the Yesco Las Vegas headquarters off Tropicana Avenue and Decatur Boulevard smells of butane and singed paper, like the patterns he’s following to repair the decorative blue bands that wrap around the columns at baggage claim at McCarran International Airport.

It’s focused, hands-on work but not physically demanding, he said. He sees himself as a smith, not an artist.

Only 1% of the workforce is in neon at Yesco, a major sign company with offices in 25 states. The company has produced some of Las Vegas’ most commanding current and past signs, including the sea of digital boards at Allegiant Stadium.

But the neon crew’s reach is outsized, said Jeff Young, Yesco senior vice president. About 20% of his work orders are for neon, split between maintenance and new builds.

Young said faux neon — with light-emitting diodes, or LEDs, strung inside opaque rubbery tubes that mimic glass — can be convincing. But discerning customers know the difference.

“In terms of sign presence, there’s no place in the world like Las Vegas. There just isn’t. The projects we’ve built, they continue to be some of the biggest in the world,” Young said.

“Neon, I don’t think, will ever lose its place capturing the hearts.”

Look at Vegas Vickie, the saucy 25-foot-tall downtown showgirl that the builders of Circa salvaged and had refurbished for prominent placement in the resort’s elevator lobby. Yesco did the repairs. Cowgirl Vickie can once again kick her leg, and that’s an impressive mechanical feat, but without neon the 40-year-old sign wouldn’t have much impact, Young said.

Jesse Hartlauer, owner and founder of Las Vegas’ Hartlauer Signs, started making signs here in 1979. Though not a neon bender himself, he also sees a niche for neon holding on even though the medium is decades from its peak and, he thinks, still shrinking.

“Back 20 years ago, there was no LED,” he said. “Neon glass blowers, they had us at their mercy.”

Years ago, 20% of his manufacturing workload would have been neon. Now it’s about 1% or 2%, he estimated.

Hartlauer’s dad was also a signmaker, and he joined him on business trips. They’d come to Las Vegas in the 1970s and young Jesse would soak up the ambiance — at the Silver Slipper once on the north end of the Strip, the hot dogs were 25 cents, the coins banged loudly out of the slot machines and neon lights glowed intensely.

Those days aren’t coming back, he said: Some components are hard to source from manufacturers. Maintenance for true neon is much more involved and expensive than it is for LEDs. New casinos aren’t being built with heavy neon elements, Vickie at the Circa aside.

Neon is a noble gas, and like its fellow noble gases argon, xenon, krypton and helium — in the context of signs and art known colloquially and collectively as neon as well — it gives off different colors when electrified. Pure neon glows red. Powdery coating applied to a tube’s inner surface adds to the color palette.

Neon benders pass tubes through the blue flames of torches and manipulate the heated glass with their bare hands. They breathe onto the molten glass through a hose to direct the hot air in a way that keeps the glass from collapsing.

In this way, neon is intimate, requiring the sensitivity of human fingers and puffs of air from human lungs to take shape — and the power of emotion to keep it in the mind’s eye.

The Neon Museum near downtown Las Vegas sits at the juncture of commerce, art and history. This isn’t where old signs go to die but to lie in repose. Some sit exactly as they are, faded, dented and raw at the edges, while Yesco, Hartlauer and others in town revive others to their original glory.

Neon Museum executive director Aaron Berger says the nostalgia neon evokes is two-pronged, renewing appreciation for neon as a fine art and bridging the past and present.

“Just seeing a neon sign brings people back to a different time: the era of the Rat Pack and the golden age of life in Las Vegas. And also this idea of roadside motels and true Americana,” he said. “All of that is encompassed in neon signage.”

LEDs require less power than neon. They’re better behaved — they don’t ground out so much. But a well-made neon lamp can last 20-30 years, Young said. LED and fluorescent fade. Incandescent filaments burn out.

Lit neon tubes have coronas around them, a fuzzy halo that comes off the activated gas like a cloud, Hartlauer points out. LEDs don’t have that effect.

“Our suppliers and scientists and designers have done a good job of replicating what neon is,” Young said. “That said, we still have so many customers who just want neon. They don’t want the lookalike.”

A love for the retro keeps it alive, Hartlauer said. His own three-man neon crew stays busy.