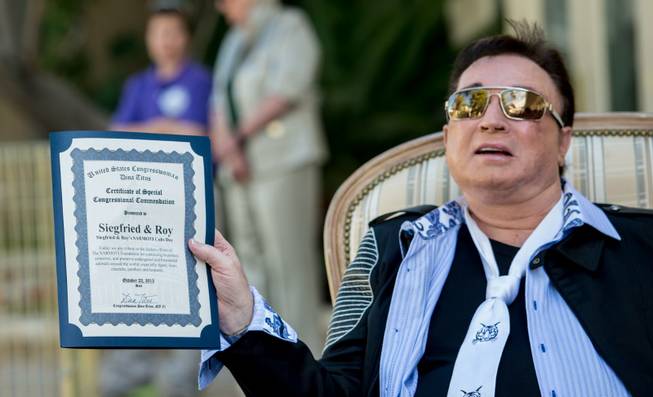 Roy Horn appears during a Make-a-Wish Foundation event at Siegfried & Roy’s Secret Garden on Thursday, Oct. 22, 2015, at the Mirage.

CARSON CITY — Nevada’s governor has ordered that U.S. and state flags be flown at half-staff at the State Capitol and state public buildings on Monday in honor of magician Roy Horn of the famed Las Vegas act of Siegfried & Roy.

The 75-year-old entertainer died in a Las Vegas hospital on May 8 of complications from the coronavirus.

Gov. Steve Sisolak said Friday that Horn’s work helped elevate Las Vegas’ status in the entertainment world and that the state is proud to honor him.

Siegfried Fischbacher said Horn would be honored by the gesture by the state where the duo lived their dreams.

Horn was a native of Germany.

He was critically injured in 2003 by one of the act’s white tigers.

The duo were an institution in Las Vegas where they attracted sellout crowds.

Sisolak’s order directs that flags be flown at half-staff from sunrise to sunset on Monday.