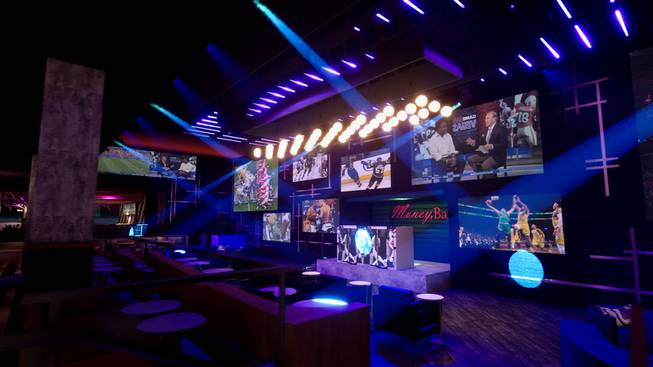 A rendering of the upcoming Money, Baby! at Virgin Hotels Las Vegas.

While sports betting has spread like wildfire across the country in recent years, the concept of the Las Vegas sportsbook has evolved into a more dynamic experience.

More than two years ago, the Linq moved away from the trend of tiered stadium-style seating and a massive wall of multiple screens by building the Book, which creates separate living room-style “fan caves” where groups can watch games, bet live, order food and drinks and participate in non-sports gaming all at the same time in a customized, personal party. And before MGM Resorts International aligned several of its Strip properties’ books under the new Bet MGM banner, it had already engineered a few hybrid venues blending a traditional sports bar experience with energetic entertainment programming and convenient betting.

A new shift is taking place at the newest Las Vegas resorts. When Circa opened downtown in October, the huge Stadium Swim pool complex garnered as much attention as its massive sportsbook. And at Virgin Hotels Las Vegas, which made its debut last week at the former Hard Rock Hotel site just east of the Strip, a new venue set to launch in May is designed to offer a high-energy sports betting and viewing environment combined with a restaurant, bar and nightclub-styled party space.

It’s called Money, Baby! and it’s the first Vegas project from the Clive Collective, a hospitality company that has launched diverse bar and restaurant concepts across the country.

“When we toured the hotel when it was still the Hard Rock and they were telling us about what they would be doing here as Virgin, there seemed to be a lack of a real hybrid concept in Las Vegas, which is what we are used to doing,” said partner Mikis Troyan. “It’s seven days a week, bar and restaurant and nightlife, and knowing what is happening in today’s market in sports betting, we wanted to change the game and create a fun atmosphere with a strong nightlife component added to watching sports.”

A look at Stadium Swim at Circa during a media preview of the resort Monday Oct. 19, 2020. The property makes its final finishing touches for the October 28 opening.

The 15,000-square-foot, multi-level Money, Baby! takes over the space of the previous Vanity Nightclub and will offer more than betting at its own in-venue book, food and drink and more than 200 HDTV screens. There are two DJ booths, a private dining room, a 5,500-square-foot patio leading out to the fully renovated Virgin pool complex, and state-of-the-art golf simulators and an indoor stand-up shuffleboard game.

“We want people to lose themselves a little when they’re here,” said partner Justin Massei. “It’s more than viewing, it’s the different experiences.”

He sees Money, Baby! bridging the gap between day and night sports and betting action and traditional Vegas nightlife, providing a single venue so guests don’t have to move on to the club after the game. And given the explosion of pro sports in Southern Nevada in recent years, this team is expecting many more Vegas visitors and locals to be seeking out such experiences for a long time to come.

“Vegas is already such an entertainment mecca but it’s really starting to carve itself out as a premier destination for pro teams,” Massei said. “Obviously the Raiders are here but I think we’ve got an NBA team coming in the next couple years and that’s really going to put it over the top. This concept couldn’t come at a better time, especially with sports gambling legalized across the country. The industry is exploding. And we feel like we’re at the right place at the right time.”

Sports betting and watch parties have been an essential element in the early success of Circa, which opened in two phases over the fall and winter. Super Bowl weekend was a highlight even though COVID restrictions limited capacities at Circa’s largest venues, the sportsbook and Stadium Swim pool deck.

“I felt very comfortable that Stadium Swim was going to work and people would love being outdoors and getting some sunshine, but people also love renting cabanas once the sun sets and coming out to watch a game,” he said. “I’ve been a little surprised how many people are booking it at night. I thought that would take a little longer to kick in.”

Now that spring temperatures are returning and casino resort dayclubs are reopening as more relaxed, lounge-style experiences at reduced capacities, Stadium Swim can really flex its muscle as a combination resort pool, outdoor sports viewing venue and party pool. Its unique design is focused more on a casual experience with sports and betting opportunities, but Circa can put a DJ in the booth or even a live band onstage and change the energy at will.