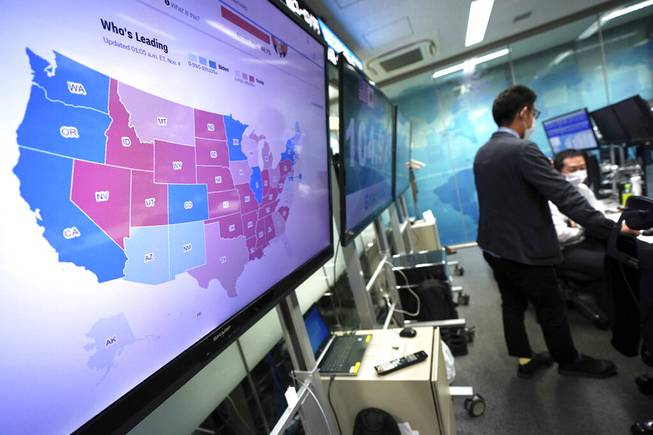 A monitor shows a news program website on the U.S. elections at a foreign exchange dealing company Wednesday, Nov. 4, 2020, in Tokyo.

In a stunning scene in the middle of the night, news organizations rebuked President Donald Trump after he falsely said on live television that he had won reelection even as votes were still being counted.

With reporters and supporters gathered at the White House at 2:20 a.m. Eastern, the president said it was “a major fraud on our nation” that he hadn’t been declared the winner. “As far as I’m concerned, we already have won this,” he said.

The words were barely out of his mouth before television anchors rushed to refute him.

CBS News’ Norah O’Donnell said Trump was “castrating the facts” by “falsely claiming that he has won the election and disenfranchising millions of voters whose ballots have not been counted.”

“Donald Trump is losing right now both in the popular vote and the electoral vote and there are many states left to be called,” ABC News’ George Stephanopoulos said.

Said NBC News’ Savannah Guthrie, “The fact of the matter is we don’t know who won the election.” Guthrie had interrupted Trump’s speech to tell viewers that several of Trump’s statements were not true.

The Associated Press said that at the time of Trump’s statement, its count had Trump winning 213 electoral votes to Democrat Joe Biden’s 225. The AP has determined that it’s too early to declare a winner in several states, including Pennsylvania, Georgia and Michigan.

It was an explosive moment after a frazzled nation had sat through hours of uncertainty. Media outlets had warned for weeks that Americans would have to be patient waiting for a decision in the bitter campaign between Biden and Trump, and repeatedly drove that point home through their election night coverage.

Biden had spoken to supporters at 12:42 a.m. in Delaware, expressing confidence in his campaign and saying he wanted to see every vote counted.

Trump had immediately responded with a tweet saying “we are up BIG, but they are trying to STEAL the election. We will never let them do it.”

The president’s address, after he was ushered to a podium to the sound of “Hail to the Chief,” received criticism in what are normally friendlier outlets.

“This is an extremely flammable situation and the president just threw a match into it,” said Fox News Channel’s Chris Wallace.

The president’s team was angry at Fox News Channel for striking out ahead of other news organizations in declaring that Biden had defeated Trump in the battleground state of Arizona. It would have been the first state to flip parties from 2016, and was crucial in the path to 270 electoral votes and victory.

Fox’s Bret Baier, noting the network was taking “incoming,” put decision desk chief Arnon Mishkin on the air. He explained that with the bulk of uncounted votes in Arizona cast early and thus more likely for Biden, Trump would not be able to catch up to the Democrat’s lead in that state.

“I’m sorry, but we’re not wrong in this particular case,” Mishkin said. The AP eventually called Arizona for Biden at 2:52 a.m.

Millions of people following election coverage on the East Coast went to bed before all the drama, and without knowing the answer to the question they had waited hours for: Who’s going to be in the White House for the next four years?

The president also expressed anger at news organizations for not declaring him the winner in Georgia and North Carolina, where he held leads. CNN’s John King explained that there was still doubt given there were votes still to be counted in regions where Biden was expected to do well.

It was emerging that the presidency hinged on the Midwest battlegrounds of Michigan, Wisconsin and Pennsylvania.

“We’ve been saying for a long time that anything could happen, this is a very competitive race and that … it really was going to come down to these three states,” said CNN’s Jake Tapper. “That’s happening, and yet it still feels like people didn’t hear it when we were telling them that the previous three weeks.”

Prior to the appearances by the two candidates, the night’s mood ebbed and flowed like a tide, and almost as predictably. Experts had said voters would be confused by the vast amount of early votes that were more likely to support Biden, and the different practices of states in when they would count them and the Election Day votes that favored Trump.

That proved to be the case when initial leads for Biden in Ohio and North Carolina that briefly heartened his supporters were suddenly erased. When Trump gained the lead in the Midwest battlegrounds, the question became whether Biden could overcome him when all early votes were counted.

On the television networks, it put the spotlight on numbers geeks like CNN’s John King and MSNBC’s Steve Kornacki. MSNBC kept a “Kornacki cam” on their man as he studied voting data.

For the first time, The Associated Press wrote stories explaining in detail to readers and members of the news cooperative why it had declared winners in individual states.

Network anchors began election night coverage with calls for patience. Stephanopoulos told viewers that it did not mean that the process is broken or unfair if the results were not clear Tuesday night.

As the evening progressed, it became clear that while patience might not necessarily be rewarded, it was still necessary.

“I would be very careful drawing sweeping generalizations about what we think we’re going to see,” Robert Gibbs, a former White House press secretary in the Obama administration, said on MSNBC. “Because it may be that it takes six days to figure out who wins this race.”