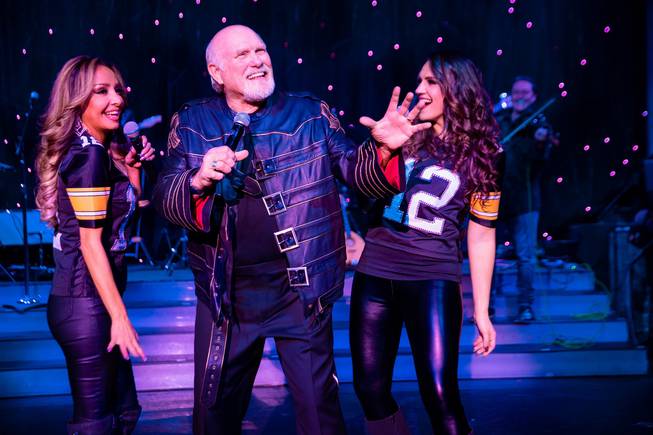 Terry Bradshaw can’t wait to get back onstage at Luxor.

Hall of Fame quarterback and NFL broadcaster Terry Bradshaw received an accidental social media boost recently. Holing up with family at his Oklahoma ranch, the “Blond Bomber” was rehearsing a gospel song, “’Til the Storm Passes By,” without knowing his singing was about to be posted online.

“It’s a song I did at the Grand Ole Opry and it’s got a great message that really applies right now,” says Bradshaw, who’s been singing for years and was performing his own headlining residency show at Luxor Las Vegas until the pandemic shut down the Strip. “I was just getting more familiar with the lyrics, so practicing, and my wife snuck up and recorded it. She posted it [on social media] and I’ve never really been into that stuff, never had more than maybe 140 thousand [followers], and we’re over 3 million now.”

Bradshaw’s wife, Tammy, also came up with the idea of this week’s virtual happy hour, which will put that growing following to good use on Thursday at 6 p.m. Oklahoma time (that’s 4 p.m. Vegas time). Bradshaw will go live from his ranch at his official Facebook page to have some drinks and talk about his Bradshaw Kentucky Straight Bourbon Whiskey, tell some stories and possibly sing a song or two.

Bradshaw introduced his spirit brand in January and it’s available all over the southeastern part of the country. He was planning to have it distributed in California, Arizona, Nevada, Washington and Illinois soon, but the pandemic has slowed the brand’s growth.

“My friends texted me to ask what the Roman numerals are on the bottle, which is pretty cool,” he says. “If you start at the top, the numbers are for Super Bowl 9, 10, 13 and 14, and then at the very bottom of the bottle, you can see it’s bottled at 51.9 percent alcohol. That was my NFL completion percentage for my career.

“I was telling my friends, aren’t you glad I’m not a 70 percent guy like some of these quarterbacks these days?”

Bradshaw made his debut at Luxor in August, creating a slimmed-down version of a storytelling and singing show he initially performed in Las Vegas at the Mirage in 2013. In January, multiple dates of “The Terry Bradshaw show” were announced throughout 2020, but he never got to return to the stage for his next planned performance in March.

Bradshaw said he has communicated with the entertainment team at Luxor and MGM Resorts International and the show is set to return when the time is right.

“It felt really good to be onstage,” he says. “To be excited about getting onstage, to not have any uncertainty, you know the songs and the show and you’re just having fun and enjoying it up there, that was a really good feeling. So when I got the opportunity to sign on and have a residency, I jumped all over it.

“And I’m singing better than ever. I was talking to a friend who’s a singer and I was telling him I’ve been back here listening to Pavarotti and Joe Cocker and all this stuff, and then I put on some Ronnie Milsap. And for some reason, these songs are my key, my range, and I can really work them. I don’t have to search for it, you know? I just went after it. And my friend said, ‘You found your voice.’”