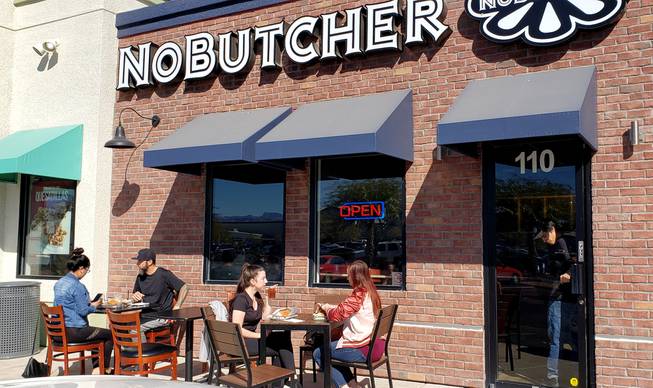 No Butcher vegan deli opened almost two months ago on the corner of Rainbow and Spring Mountain.

Vegan dining is not a trend. That is becoming clear as more fast-food mega-chains incorporate plant-based proteins into their offerings while the local scene has exploded with an expansion of different vegan restaurants across the Las Vegas Valley.

Despite that growth, you probably wouldn’t expect to see a vegan deli pop up in your neighborhood. After all, a traditional delicatessen is all about choosing your favorite meats and cheeses to create a satisfying sandwich.

No Butcher’s pulled no pork sandwich is the most popular item on the menu.

But that’s exactly what’s happening at No Butcher, a new vegan deli at the corner of Rainbow Boulevard and Spring Mountain Road. Co-owners Sebastian Mueller and Alecia Ghilarducci opened the shop seven weeks ago after starting a wholesale business selling their own scratch-made vegan meats and cheeses more than two years ago.

“In the beginning we weren’t thinking about opening a store, but once we started doing festivals and interacting with consumers, so many asked where they could buy our [products],” Mueller said. “At some point we kind of gave in and realized this is our path. So far it’s been a big success. We had a grand opening with about a thousand people wrapping around the building.”

It’s the first real restaurant endeavor for both owners. Mueller came to Las Vegas from Germany more than five years ago and Ghilarducci, who takes the lead on developing new dishes at No Butcher, moved from Southern California just two years ago. She said the focus is on freshness and flavor, not necessarily creating sandwiches and other menu items that replicate familiar favorites.

No Butcher’s most popular item is the Pulled No Pork sandwich, a crispy ciabatta roll stacked with tender and savory seitan that replicates pulled pork with house-made barbecue sauce and maple-mustard cole slaw.

“I’ve been vegan for a while now so I don’t know how much I can say it tastes like pulled pork,” Ghilarducci said. “It’s really going off of memory and definitely the satisfaction factor. That’s what drives everything we do. Visually, it’s easy to [replicate meat] but getting it to taste right is the hard part.”

No Butcher also offers a version of an Italian cold cut sandwich and a Hawaiian-style teriyaki rib sandwich, tuna and egg salad sandwiches and burgers to go with side dishes like potato salad, macaroni and cheese or lentil salad. There’s also a Mediterranean roasted vegetable sandwich that’s available in a gluten-free version. Most of the meat substitutes are made with the wheat-based seitan while cheeses are made with cashews or almonds.

“We like to be creative and play with our products, especially Alecia who likes to whip up new dishes every day with sides and salads,” Mueller said. “It’s an outlet for our creativity but it also just makes life easier for vegans who can walk in and they don’t have to read labels. They know everything is fresh and made from scratch, and that feeling that everything is homemade and so fresh seems to be attractive for vegans and non-vegans.”

No Butcher (3565 S. Rainbow Blvd., 702-268-7488) also offers vegan roasts and accompanying side dishes for take-home holiday meals, and the restaurant expects to open its drive-thru window in the coming weeks. It’s open daily from 11 a.m. to 8 p.m.