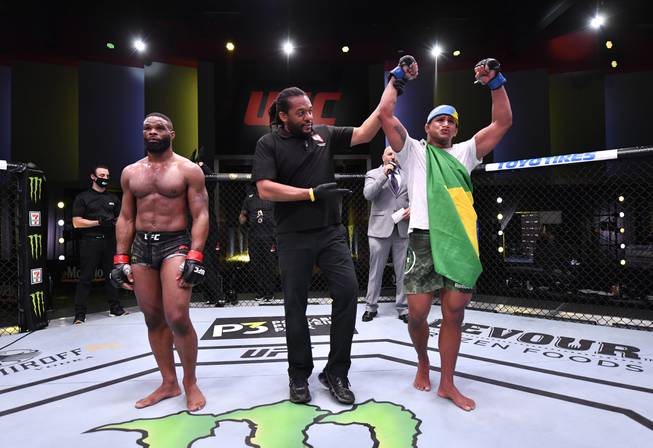 Gilbert Burns of Brazil reacts after his victory over Tyron Woodley in their welterweight fight during the UFC Fight Night event at UFC APEX on May 30, 2020 in Las Vegas, Nevada.

A lot hinged on the success of the UFC’s Saturday night return to Las Vegas with the first live sporting event in Nevada since the widespread coronavirus shutdowns began more than two months ago.

With the promotion hoping to stage fight cards without spectators for the foreseeable future at its UFC Apex facility — and other sports leagues potentially staging their own games or events locally — it needed the first one to go off without a hitch.

By all accounts, that happened as the UFC followed the new protocols enacted by the Nevada State Athletic Commission, and saw its 11-fight event on ESPN proceed as planned.

“The way I always think and look at stuff like this is I always try to solve the problems, try to figure it out,” UFC President Dana White said. “The show always goes on.”

It took flexibility for the UFC to shift operations from Jacksonville, Fla., where it held three fight cards earlier this month, to Las Vegas, where it hopes to put on four more cards over the next five weeks. The NSAC had stricter guidelines than its Florida counterparts, which led to all the fighters and their teams being tested multiple times for the coronavirus throughout the week.

All the “essential personnel” on hand at the fights were also tested Saturday morning and sequestered in a locked-down hotel until showtime. No one tested positive.

And if that wasn’t reason enough for celebration, the fights provided more as White said he got “goosebumps” thinking about the night’s performances. He may have developed a couple new stars, or at least fighters moving up a level in popularity by competing in front of a national-television audience when no other live sports were airing.

Gilbert Burns made the most of his opportunity in the main event as the veteran welterweight upset former champion Tyron Woodley by unanimous decision (50-45, 50-44, 50-44). He teared up in the octagon as the decision was read, knowing he had captured the biggest win of his career to date.

“I sacrificed so much,” Burns said. “I needed to be in the moment.”

Burns, a Brazilian jiu-jitsu black belt expected to try to out-grapple his opponent, mostly beat Woodley on the feet as he dropped him in the opening minutes with a combination. He then opened a cut on Woodley’s forehead by throwing ground-and-pound.

Woodley recovered for the rest of the fight, but he never threatened to as much as win a round against Burns.

“Nothing surprised me,” Burns said. “I knew I could hurt him.”

Burns, a Rio de Janeiro native, is now a fight or two away from challenging for the title. Fellow Brazilian Augusto Sakai might be able to say the same.

A 150-pound catchweight bout between Billy Quarantillo and Spike Carlyle was the talk of the night. Carlyle sprinted at Quarantillo to start the bout to set the pace for a frenetic affair.

He eventually gassed, allowing Quarantillo to take over in the second half of the fight and leaving everyone unsure of which way the scorecards would fall. Quarantillo ultimately got the nod, scoring a unanimous-decision win (29-28, 29-28, 29-28).

“I knew that I beat him up more than he beat me up,” Quarantillo said. “I almost finished him a couple of times, I had a tight choke in there, he didn’t really come close to finishing me, he punched me a few times pretty hard, but nothing I haven’t seen before.”

It felt somewhat unfitting that the final three fights all went to the judges’ scorecards considering the reckless nature of most of the bouts. Six of the first eight fights ended in stoppage before the third round.

That was part of the reason White was so overjoyed as he vowed to continue with closed-door fight cards for as long as necessary.

“One guy makes the decision here and it’s me,” he said. “And you know me, ‘we’re (expletive) going.”

Read below for results from the rest of the card.

Roosevelt Roberts choked out Brok Weaver at 3:26 of the second round in a catchweight (157.5) contest. Roberts mixed his striking and grappling to perfection to frustrate Weaver throughout.

Mackenzie Dern submitted Hannah Cifers at 2:36 of the first round with a kneebar. Cifers caught the decorated Dern, whom many considered a future champion before she suffered an upset and first career loss against Amanda Ribas last October, a couple times on the feet but couldn’t escape her fate on the ground.

Katlyn Chookagian dismantled Antonina Shevchenko to avenge a loss earlier this year to her sister, flyweight champion Valentina Shevchenko, throughout all 15 minutes of their fight. Chookagian couldn’t get the finish but settled for a unanimous decision (30-25, 30-25, 30-25) to get back on the winning track in the flyweight division.

Daniel Rodriguez defeated Gabriel Green via unanimous decision (30-27, 30-27, 30-27) in a welterweight bout. The fight was closer than the scores make it appear considering Green landed with relative frequency despite taking the bout on less than a week’s notice.

Undefeated light heavyweight Jamahal Hill took the next step in becoming one of the UFC’s most heralded prospects. Hill dominated Klidson Abreu, securing a TKO with a flying knee at 1:51 of the first round.

The newcomer beat the veteran in the night’s only flyweight affair. Brandon Royval submitted Tim Elliott via arm-triangle choke at 3:18 of the second round after eight minutes of fast-paced, momentum-swinging action.

Casey Kenney stopped Louis Smolka at 3:03 of the first round in a bantamweight bout. Kenney submitted Smolka with a guillotine choke.

Chris Gutierrez defeated Vince Morales via TKO at 4:27 of the second round in a featherweight bout. It wasn’t a traditional knockout victory, as Gutierrez prevailed by picking apart Morales with leg kicks until he could no longer proceed.