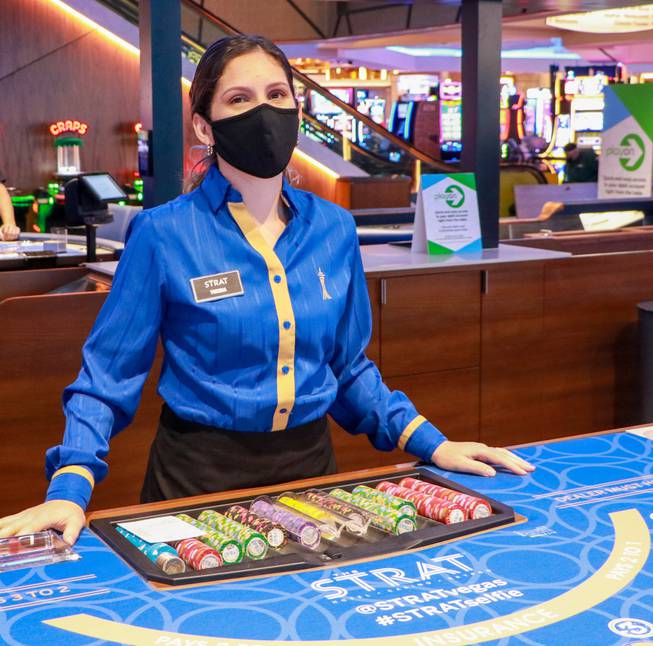 A Strat team member welcomes guests back to the casino on June 4.

The Strat and Sahara Las Vegas have several Strip similarities that go beyond their proximity on the northern end of Las Vegas Boulevard. Both casino resorts were deep into vast renovation and rebranding projects when the statewide shutdown paused all gaming business.

And both have seen encouraging traffic since reopening on June 4, most likely due to those recent improvements. A walk through the main entrance of either casino leaves an immediate impression of newness.

Reopening weekend hotel room occupancy at the Strat was “a little higher than where we thought we would be,” said Vice President and General Manager Stephen Thayer. “It was a slow ramp-up and then a couple days out and even the day of [opening], it skyrocketed. People were just getting in their cars and driving up and making a reservation on the way here.”

Strat visitors are finding a strikingly refurbished casino floor, especially at the Las Vegas Boulevard entrance that was formerly closed off by a round bar. That segment, stretching back to a new-ish Starbucks store, was completed just before New Year’s Eve.

The Strat also touched up its spacious beer hall and sports bar and rechristened it as PT’s Wings & Sports, an obvious name change considering the resort has been operated by Golden Entertainment, the gaming company behind the PT’s Pub tavern chain, since 2017.

“It really fits,” Thayer said. “It’s has a comfortable feel and a comfortable menu and I think it’s more inviting. We’re going to continue to tweak it, thinking about some games and other stuff to put up front to make it feel like more of a sports bar.”

When casinos are able to reactivate their live entertainment offerings, the Strat will be bringing live bands to the spruced-up Remix Lounge, which has a new sound system and a much larger bar to complement a stage that can project music and excitement directly into the casino. Thayer said there’s a plan to re-introduce live entertainment there before the July Fourth weekend if allowed.

Strat staffers welcome their guests back to the Strip resort on June 4, 2020.

The Strat’s remaining renovation projects will resume soon, although they had been temporarily paused by design before the pandemic put a halt to business as usual. “We were about to ramp up again when everything started slowing down. We didn’t want to have construction going on during CES and the other big conventions [early in the year],” Thayer said. “So it stopped in December and we just haven’t gotten back into it yet. We’re about to start working on the high-limit baccarat pit and putting pricing together to finish up the north casino section, with more to come.”

Sahara Las Vegas, acquired by Alex Meruelo in 2018, has completed an end-to-end revamp of its casino floor and hotel lobby area and the bright, sleek design is unrecognizable from the iconic property’s days as the more industrial SLS Las Vegas. It’s a fresh look for Vegas visitors who haven’t been able to hit the Strip in months or longer.

“I think our brand symbolizes what people are looking for. It’s boutique, you don’t have to compromise on quality but there’s still space,” said Vice President of Marketing Rachel Hunt. “While we were closed we renovated our two rooftop pools with social distancing in mind so that people would have more space to choose from and pockets of their own area for households or families traveling together.

“In a lot of ways that symbolizes what we’re all about. It’s not about being the biggest, it’s about having quality experiences.”

She said resort officials were pleasantly surprised with business levels considering the expected low occupancy — hotels are restricted to booking 50 percent of rooms during the current Phase Two of the state’s pandemic recovery plan — and the first week’s success will allow the Sahara to open more outlets earlier than planned. That includes expanded hours at restaurants Bazaar Meat and Northside Café, the reopening of the Uno Más taco shop next week and the new poker room’s return on June 18.

Two more big projects are in the works: the construction of a theater for “Magic Mike Live” in a three-story space in the Sahara’s meeting room area and a complete overhaul of the main pool complex. The latter effort is currently in the demolition phase.

Hunt confirmed the company is committed to both projects but don’t be surprised if there are significant changes to the original pool plans, which called for a two-story, 18,500-square-foot nightclub, lounge and theatrical space. With live entertainment still on hold and Vegas nightclub and dayclub operations in limbo, any resort would be hard-pressed to invest in that kind of expansion.

“In total, it will be over $150 million in renovations here and when you look at this product [the lobby and casino] and what we have been able to do, it just makes us more excited for those next phases,” Hunt said. “There’s a lot going on behind the scenes and Mr. Meruelo is committed to making it happen. It’s a constant re-evaluation in the era of what we’re dealing with.”