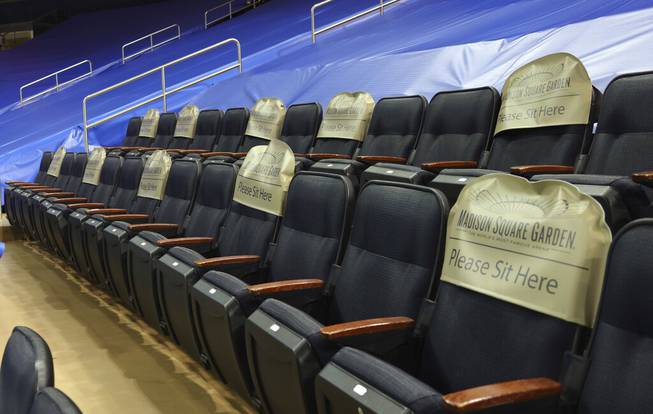 Seats are earmarked for fans at future games prior to the NHL hockey game between the New York Rangers and the Boston Bruins at Madison Square Garden Wednesday, Feb. 10, 2021, in New York. New York State announced today that arenas can re-open on Feb. 23 at 10% occupancy.

ALBANY, N.Y. — Large arenas and stadiums in New York can soon reopen for sports and entertainment at 10% of their normal capacity under a plan announced by Gov. Andrew Cuomo on Wednesday, despite concern from public health experts about still-high rates of COVID-19 infections and the threat of more contagious variants.

Cuomo said major stadiums and arenas with a capacity of 10,000 people or more can reopen with limited spectators starting Feb. 23.

The Barclays Center, which has about 17,700 seats for basketball games, has already received state approval to reopen Feb. 23 for the Brooklyn Nets’ home game against the Sacramento Kings. And the New York Knicks and New York Rangers said they plan to host about 2,000 fans at every game, starting with Feb. 23 and Feb. 26 games at Madison Square Garden.

The Nets and and Knicks are among about a dozen of the 30 NBA teams that are allowing some fans to attend games, according to the league’s website. It’s unclear how many states are allowing indoor concerts.

But CUNY School of Public Health epidemiology professor Denis Nash said New York’s approach lacks a scientific basis when “community prevalence is very high.” He and other public health experts interviewed by The Associated Press pointed to evidence that COVID-19 spreads more easily indoors and questioned why New York’s policy includes indoor stadiums, which raises the risk of people sitting near others who may be cheering or taking masks off while eating.

“To think about bringing people into large groups and mass gatherings including in indoors arenas, right now, seems cross-purposes with our efforts to really maximize the impact that the vaccine roll out will have in controlling the pandemic,” Nash, the executive director for CUNY Institute for Implementation Science in Population Health, said.

The number of new infections in New York is dropping but remains much higher than most states per capita: nearly 62,000 people have tested positive for COVID-19 in the last seven days — a rate last seen in early December.

At least 1,000 people with COVID-19 have died in nursing homes and hospitals each week since early January.

And New York has the nation’s highest rate of COVID-19 hospitalizations per capita: 7,593 patients as of Tuesday, down from nearly 9,300 in mid-January.

Eli Rosenberg, professor of epidemiology and biostatistics at University at Albany School of Public Health, said he’s worried about ensuring venues are following rules, and whether the shift would suggest New York is “out of the woods.”

“We’re still at a very severe point, even if the trajectory is good,” Rosenberg said.

Still, Cuomo and his aides have compared signs of lessening spread, following the winter surge, to mid-May, when his administration began lifting restrictions.

“Live sports and entertainment have long been engrained in the fabric of New York and the inability to hold events has only added to the isolation we have all felt at the hands of this virus,” Cuomo said.

Cuomo said all staff and spectators must receive a negative laboratory test within 72 hours of the event. Cuomo aide Gareth Rhodes said 82% of tests in New York are coming back within 48 hours.

Still, that leaves open the possibility of people who recently caught COVID-19 testing negative one day but still being able to transmit the virus on game day, according to Scott Weisenberg, infectious diseases specialist and director of the travel medicine program at NYU Langone Health.

“We’ve had virtually no cases of spread from that game,” Cuomo claimed Jan. 29.

Still, Cuomo hasn’t responded to the AP’s repeated requests for evidence of that assertion.

The Department of Health had planned to cross-check the list of attendees with the list of people who tested positive in New York in the following two weeks, but state health officials said they weren’t able to track about 281 out-of-state fans who attended the first game.