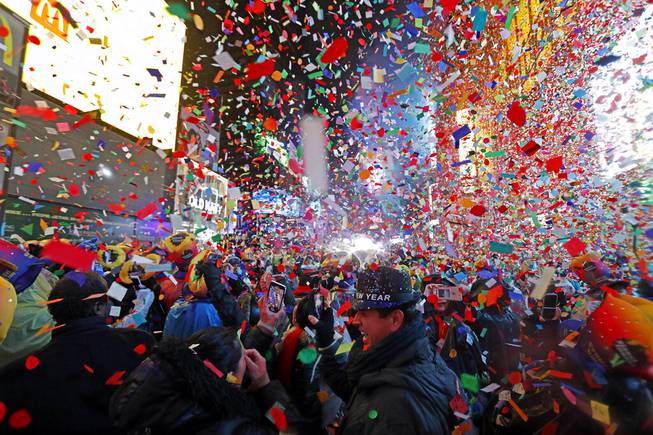 In this Tuesday, Jan. 1, 2019, file photo, Joey Flores, of California, uses his cellphone as confetti falls during a New Year’s celebration in New York’s Times Square.

Thousands of police officers will be on duty for Tuesday night’s festivities, along with specialized units armed with long guns, bomb-sniffing dogs and other measures.

For the first time, police drones are expected to keep watch over the big, confetti-filled celebration — a year late after rain grounded the department’s unmanned eye-in-the-sky last year.

This year’s forecast calls for some clouds, but no rain and none of the bitter cold that iced out spectators two years ago.

“Times Square is probably going to be the safest place on the planet Earth on New Year’s Eve because nobody else puts that kind of effort into an event like this,” Miller said.

Police Commissioner Dermot Shea said there are no specific, credible threats to the event, which brings hundreds of thousands of people to midtown Manhattan and attracts millions of TV viewers. Post Malone, BTS and Alanis Morissette are scheduled to perform on stages in the heart of Times Square.

Shea said spectators should feel safe but encouraged them to remain vigilant and alert an officer or call a police hotline if they feel something is amiss.

“This is going to be one of the most well-policed, well-protected celebrations in the entire world and we’ll have another safe and enjoyable New Year’s Eve,” Shea said.

Streets in and around Times Square will be closed to car traffic hours before the ball drops and police cars and sand-filled sanitation trucks will be positioned to stop vehicles from driving into the crowd.

Everyone showing up for the confetti-filled festivities should expect to be wanded with metal detectors before being ushered to one of 65 viewing pens set up around Times Square to prevent overcrowding.

Backpacks, chairs and coolers are banned, as well as personal drones. And don’t think about popping champagne or lifting a Maddog 20/20 to ring in 2020. The NYPD says alcohol is strictly prohibited.

There aren’t any bathrooms, and anyone leaving won’t be allowed back to their original spot.

Some revelers are sure to end up featured on Ryan Seacrest’s “Rockin’ Eve” broadcast, especially if they’re wearing those kitschy “2020” glasses, but there’s a good chance everyone in Times Square will be caught on one camera or another.

Police will be monitoring more than 1,000 security cameras, along with feeds from police helicopters and the drones.

Several of the NYPD’s drones are equipped with thermal-imaging and 3D-mapping capabilities and strong camera lenses that can greatly magnify a subject.

Since last year’s New Year’s Eve rainout, they’ve been used at other big events in the city, such as the Women’s March and St. Patrick’s Day Parade.