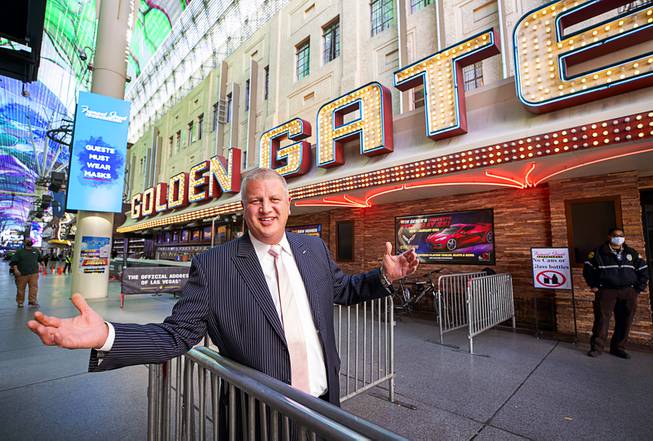 Casino owner Derek Stevens poses in front of the Golden Gate in downtown Las Vegas Friday, Jan. 15, 2021. The casino, originally opened as Hotel Nevada in 1906, is celebrating 115 years of operation this year.

Today, he reflected on its oldest, the Golden Gate, which is celebrating its 115th anniversary this week. Stevens and his brother, Greg, own both Fremont Street properties.

“The Golden Gate’s address is 1 Fremont Street,” Stevens said. “It’s the oldest building in Las Vegas. I think that’s pretty cool. I feel fortunate that I get to be a part of it a little bit.”

As he spoke outside the Golden Gate, a passerby in a business suit yelled out to him.

“Your new casino is amazing, Mr. Stevens,” the man said.

Circa, which opened in October, represents what’s shiny and new downtown.

Golden Gate doesn’t those types of amenities — though its guests do get free access to Stadium Swim — but it has a treasure trove of pieces of Las Vegas history.

When J.F. Miller,the founder of the Golden Gate — initially, it was called Hotel Nevada — opened the property in 1906, rooms were just $1 a day. Guests had to shell out more for gambling and whiskey.

Visitors can still book a stay in one of the hotel’s original 10 rooms on the second floor.

“For me, it’s really all about the characters — the customers and the people who work here,” Stevens said.

In March, Golden Gate, along with every other casino property in Nevada, was closed for more than two months the help prevent the spread of the coronavirus.

Pedestrians were few Friday morning along the outdoor mall that makes up the Fremont Street Experience pedestrian mall, but Stevens is optimistic about the future of downtown’s resort scene.