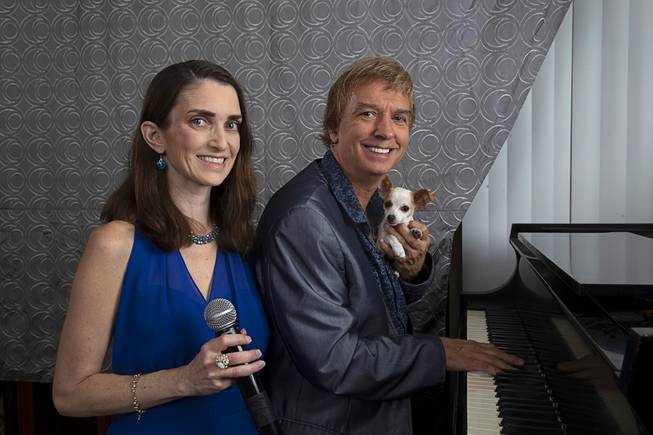 Entertainers Ned Mills and Sally Olson are interviewed at their home in Las Vegas Thursday, Oct. 15, 2020. The couple perform as Richard and Karen Carpenter in a tribute show to the 1970s vocal duo, but they’ve been unable to return to the stage since the pandemic. Ned is holding Lola, their Chihuahua puppy.

Las Vegas entertainers Sally Olson and Ned Mills thought 2020 was going to be a “huge” year.

The couple’s hard work was paying off on their Carpenters tribute show, which they were performing to adoring audiences.

They had seemingly perfected the music of siblings Karen and Richard Carpenter, whose pop tunes skyrocketed on the charts in the 1970s. The show’s acting, wardrobe and marketing also seemed to be spot-on.

All that was left was to continue working to sell out the 25 performances they had been booked to do.

Then everything changed on St. Patrick’s Day.

Mills was playing piano at a local venue when the manager announced the pandemic was shutting down the Nevada economy. You could hear a pin drop, Mills said, describing the reaction as funeral-like.

“We were really starting to gain some good momentum, so when things came to a crashing halt, it was really devastating,” Olson said.

Nearly 200,000 Nevadans have been out of work because of the pandemic, including many entertainers in a town known for its performances. Some shows are returning at limited capacities; others not so much.

Suspended from reality, audiences might struggle to see any differences between Olson and Mills and the real Karen and Richard Carpenter.

While some tribute acts might focus on playing the classic jams, the Las Vegas couple’s show completely re-creates the siblings’ 1976 tour, which saw them share stories and play tracks that weren’t released to the public.

Olson learned how to drum and bought a vintage silver-sparkle Ludwig drum set because Karen Carpenter played one on that tour.

As a little boy, Mills was handed a trumpet by his father, who told him he would give him a dollar if he played it. “I didn’t want to learn how to play trumpet, I wanted my dollar,” he said.

He loved it and he soon learned the piano. After college and music stints on cruises, Mills visited Las Vegas in 1999. Shortly after, he decided to take a “leap of faith” and move to the entertainment capital of the world.

The North Carolina native hasn’t looked back. He produced and starred in the “Piano Follies” show at the Suncoast, having “the world’s first 1959 pink Cadillac piano.”

Olson has liked to sing since she was a little girl. But she studied visual arts and dabbled in acting. As a managing director at a singing studio in her native Vermont, she learned the “nuts and bolts” of the business and became inspired to take up singing professionally.

In high school, she loved the music of the ’60s and ’70s, so she listened to the classic pop radio stations and started wearing vintage clothes: bell bottoms and a lot of polyester, to her mother’s “dismay,” she jokes.

When it came time to pick the artist for her one-person show, Karen Carpenter was a perfect fit — their contralto singing styles were similar. It was a “big aha moment,” she said.

In 2018, Olson visited Las Vegas to audition for “Legends in Concert” and to look for her own Richard Carpenter. She landed the gig and set up duo performances with pianists. She met Mills on Jan. 28, 2018, the first and only performer she auditioned.

“I needed a Richard Carpenter for the show that I knew,” Olson said. “But what I wasn’t expecting was also finding a partner.”

They immediately “clicked” musically and soon after as a couple. She moved in with him, and they began creating their show.

Logistically, the first performance was messy, Mills said. Their second, however, at a 50th anniversary celebration of the Carpenters in California, was a success. Since, they’ve only had one show not sell out. They’ve also played in Florida, Texas, Wisconsin and Vermont.

The couple had an optimistic approach once the pandemic began: It would take about one month for things to get back to normal once the virus curve was flattened, Olson said.

“You plan a show, you get everything ready to go, and then the phone rings and a theater goes, ‘Sorry,’” Mills said.

“And it’s just one after another, cancel, cancel,” Olson interjected.

“We just hit wall after wall with that,” Mills said. But referencing a famous Carpenters’ hit, he added, “we’re not going to let rainy days and Mondays get us down.”

Mills and Olson describe themselves as frugal and said they had savings to hold them over. Immediately, Mills worked on forbearance payment arrangements for his car, house and even his alarm system.

Olson worked on applying for grants and stimulus loans. It wasn’t easy, but they received both. Instead of blowing the funds, they saved them, they say.

If the pandemic continues, they will have to further tighten their belts but could survive for a year, Mills said.

“There will be a silver lining to this,” Olson said.

They say they feel lucky, because they know of friends who’ve contracted the virus, and others who’ve lost so much.

Olson said they work harder now than before the pandemic. They’ve performed virtually from home and are working to perfect their craft. Mills is working on patenting a musical invention he didn’t want to get much into, while Olson spends time marketing their show. Her visual arts degrees have come in handy, she said.

Still, as social creatures who feed off the energy from their audiences, being confined to home has nicked at their fortitude. It’s hard to stay relevant when the show lights have been turned off.

Though cheerful, Mills hates to hear two phrases that have surfaced during the pandemic: “Why don’t you get a real job?” and “This is the new normal.”

“We think that every job is essential, because if you peel the layer deeper, that means, ‘Oh so feeding my family is not essential?’”

“I take the term ‘new normal’ as offensive,” Mills said. “This is not normal; for people to be shut in their homes indefinitely.”

But when they’re feeling down, Mills likes to remember a saying he’s heard about “the man who complained he had no shoes until he met the man who had no feet.”