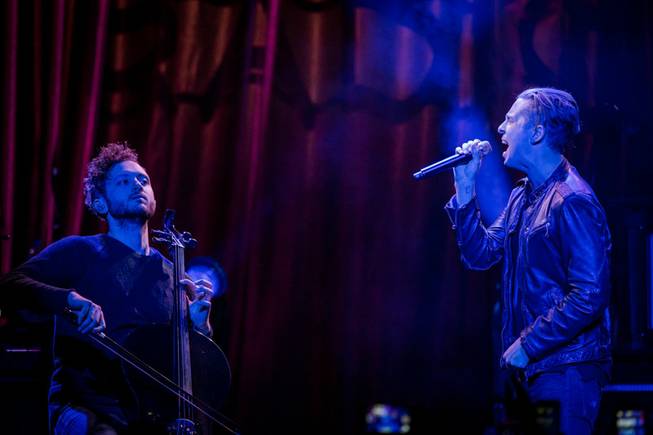 Brent Kutzle, left, and Ryan Tedder of One Republic perform in 2015 in Las Vegas. The band returned this past weekend for a pair of shows at Zappos Theater at Planet Hollywood.

The storytelling wasn’t solely in song this past weekend when One Republic performed a pair of concerts at Planet Hollywood’s Zappos Theater.

The group’s frontman, Ryan Tedder, kept audiences both nights entertained with personal and riveting tales of growing up, performing on the road and working with other celebrities.

Oh, and the guy showed he can sing, dance and play a number of musical instruments too.

Tedder has collaborated with a number of artists, including Taylor Swift, Lady Gaga, Paul McCartney, Bono of U2 and Ariana Grande, and churned out Grammy Award-winning megahits for One Republic and others. “I’m really lucky to have two jobs, both of them doing the same thing,” Tedder told the audience. “And I consider myself lucky to work with some of the most talented people on earth. Extremely lucky.”

One Republic — the Colorado-based band that has been around for nearly 20 years and putting out its own hits since 2007 — covered three of those songs, “Rumour Has It,” made famous by Adele, “Sucker,” the catchy Jonas Brothers it that rose to No. 1 on the charts, and Beyoncé’s 2009 top-five hit “Halo” during Sunday night’s show.

So why write a hit for another artist or group when One Republic could record it? In the case of “Sucker,” Tedder said he was excited about the tune when he took it to his bandmates. When they sang it, there was a feeling that it just wasn’t right for One Republic (although you wouldn’t have thought so witnessing their cover of it Sunday night). The Jonas Brothers got ahold of it, and took it to the top of the charts.

“Halo,” he said, got its inception in a different way.

Tedder said the song “Come Home” on the band’s first album, “Out Loud, was written about a college friend who was in the military and had just been recalled to Afghanistan. The friend, newly engaged, had to leave behind his fiancee, who was expecting a baby. The song, written from the finacee’s perspective, had gained the attention “of a famous artist, who asked if I could write a song like that for her.”

His answer in a nutshell was that he could try … but “if I’m trying to write a hit, it won’t work. You have to live life to have stuff to say,” Tedder said.

Lo and behold, he said an injury landed him on his back for five to six months. One day during that stretch, an idea landed in his head and he began to put words and music to paper. Within three hours, he said, and with the help of songwriter and friend Evan Bogart, “Halo” was written.

Judging from the reaction of the audience at Sunday’s concert, had “Queen B” passed on recording “Halo,” it would have been a hit for One Republic.

But the night wasn’t all about songs made famous by other artists. Five of the songs performed — “Distance,” “Rescue Me,” “Take Care of You” “Someday” and “Run” — were off of One Republic’s newest album, “Human,” which was released at the end of last month.

And there were One Republic’s hits. “Good Life,” “Counting Stars,” “Stop and Stare,” “Love Runs Out” “I Lived” and “Apologize” — the single that helped launched the band into stardom — all received raucous ovations from the full house.

In a nod to the weekend shows here, Tedder switched up the lyrics in “Good Life”:

To my friends in New York, I say hello

My friends in Vegas, they don’t know

Where I’ve been for the past few years or so

Paris to China to Colorado

With the weekend shows being the first for One Republic since nearly being stranded in Europe at the onset of the coronavirus pandemic at the start of 2020, Tedder said the band was especially grateful to be playing in front of live audiences again. “It’s an honor for us. We appreciate every one of you.”

Of course there’s more to how the band made it back to the United States, but that’s a story for another time.

“Take Care of You”

“If I Lose Myself”