or 23 years, Daniella Etel Courban “had a front-row seat in the amphitheater of the human experience” while working as an obstetrician-gynecologist. In a May 21 Instagram post (@pineconerevolution), the day that she submitted her final resignation in order to pursue art full time, Courban wrote that she will “always be grateful to the thousands of women who allowed me to be there for them both in great moments of joy as well as profound moments of sadness and loss.”

Courban is taking all of that hard-earned wisdom, insight and empathy into this next chapter of her life. While the medical doctor has always made her own art on the side and will continue to do so, her new focus is the creation of Open Art Las Vegas, on the second floor of the Arts Factory. 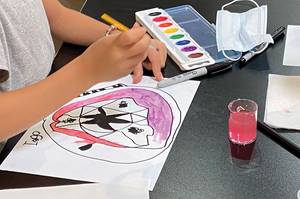 Kids work on personalized mandalas during an Open Art workshop

During the pandemic lockdown, Courban brainstormed about how she might build a business or program Downtown. “I thought about different spaces in my life that have been very nourishing … the rooms [in my] high school—I was an art major—where people could just drop in and work on projects,” Courbon says. “I thought, ‘What a wonderful idea to bring that to Las Vegas and have it be for not just teenagers, but for adults.’”

Thus, Open Art Las Vegas was born with a soft opening in July and a planned full opening on September 1. The light, airy 480-square-foot space serves primarily as a drop-in art studio, where anybody can make art. “I’m going to have supplies set out at different stations,” Courban says, “so that they can just drop in to take a break from their regular day and not have to carry anything.”

In addition to the unstructured free creative time, Open Art will host workshops and classes for all ages. Due to the pandemic, capacity is limited to six participants. So far, Courban has hosted about seven workshops, along with a few private bookings.

Having lived in Las Vegas for two years, the East Coast transplant has connected quickly with the local arts scene. Courban’s desire to help foster community is clear from Open Art’s many planned collaborations. Last week, Courban debuted a collaboration with Blue Sky Yoga (on the ground floor of the Arts Factory), in which children participate in an hour of yoga, followed by an hour of art.

On September 26 (7 p.m., $36), artist Stanley Webb will lead a workshop titled “Black Arts Movement: The Art of Protest.” And in October, Courban will co-lead a monthly “multisensory” workshop on color with author and Velveteen Rabbit co-owner Christina Dylag. Coming from diverse creative backgrounds, both women will explore the idea of color in experiential ways, Dylag explains. “The course will encourage its participants to see and experience color in a new way,” Dylag says.

Visitors will also have access to Open Art’s library of art books and monographs. “One of the benefits of having an open space is to be able to share ideas and share art,” Courban says. “I’m trying to bring as many books here as I can in terms of exposing [people] to some artists they might not have heard of. I think that’s really exciting.”

Open Art’s price points further reflect the theme of accessibility to all. Studio time costs $10 per hour, which includes the use of supplies; most workshops run $20. “My main goal for this place is to offer a very relaxing, open environment for creativity,” Courban says. “You don’t need to have artistic skills to come here.”