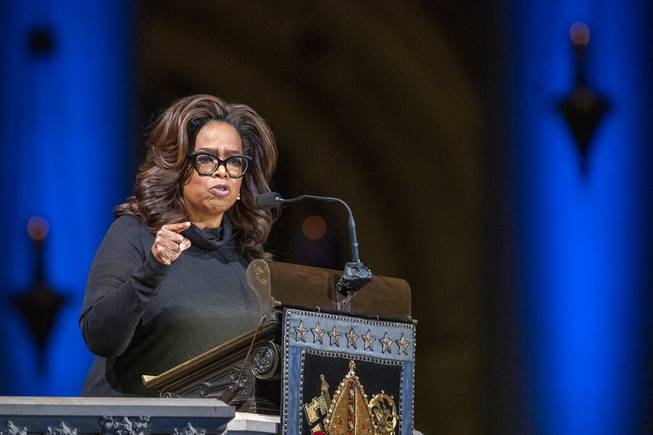 In this Nov. 21, 2019 file photo, Oprah Winfrey speaks during the Celebration of the Life of Toni Morrison at the Cathedral of St. John the Divine in New York. Winfrey says her friend Gayle King is facing death threats following a social media backlash caused by an interview with WNBA star Lisa Leslie that concerned the late Kobe Bryant. Winfrey said on Hoda & Jenna & Friends, Friday, Feb. 7, 2020, that King “is not doing well” and has to travel with security because of threats.

The 66-year-old entertainment icon told The Associated Press on Friday that she has been quarantining and practicing social distancing at her home — even if that means longtime partner Stedman Graham has to stay in the guest house.

“I have now-grown girls from South Africa here (but) Stedman’s on lock down at the guest house. He’s still there, asking: ‘When can I come? When can I come to the main house?’ He’s still got, hmm, till Monday,” she said.

Earlier this week Winfrey posted a video of her talking to Graham as he poked his head outside of the guest house window. She said he must stay in the guest house because he had been recently flying and they’re trying to be safe.

“I’m getting ready to take him some food down there now for lunch. But I’m playing it as safe as I possibly can. Nobody goes out and nobody comes in,” she said.

For most people, the new coronavirus causes mild or moderate symptoms, such as fever and cough that clear up in two to three weeks. For some, especially older adults and people with existing health problems, it can cause more severe illness, including pneumonia and death.

Winfrey has been busy working despite being stuck at home. She interviewed actor Idris Elba, who tested positive for the coronavirus, through FaceTime for an episode of “Oprah Talks: COVID-19” on Apple TV.

When asked about how she’s continuing to do work from her home, she said: “What did we do before Zoom is what I’d like to know? How could we do it without Zoom? I don’t even know.”