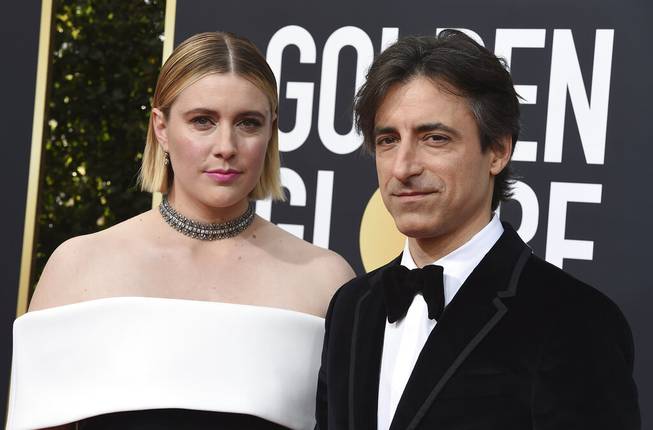 This Jan. 5, 2020 file photo shows director Greta Gerwig, left, and Noah Baumbach at the 77th annual Golden Globe Awards in Beverly Hills, Calif. Both Gerwig and Baumback failed to receive Oscar nominations for best director for their film “Little Women” and “Marriage Story,” respectively, but they did receive nominations for adapted screenplay for Gerwig and original screenplay for Baumbauch.

Actress Issa Rae was ready with her quip, as if she had predicted the Oscar nominations that were announced Monday. “Congratulations to those men,” she said dryly, as the best director nominees — yes, five men — were announced.

Rae’s expertly thrown shade echoed through social media as observers took stock of what was, yet again, a pretty bad day for diversity and inclusion in Hollywood. Not only were there no female nominees in directing for the 87th time in Oscar history — a direct snub to Greta Gerwig, director of the acclaimed “Little Women,” as well as several other worthy candidates. There was also only one person of color, Cynthia Erivo, among the 20 acting nominees.

Those slights overshadowed the happier news that across all categories, a record 62 women (about a third of nominees) were nominated.

They also had people asking: Why is this happening again, when diversity has been on the front burner for years now, and the Academy has taken steps to overhaul its overwhelmingly white, male membership? And what will it take to accomplish real change?

“So here we are again,” said Stacy L. Smith, director of the USC Annenberg Inclusion Initiative at the University of Southern California, of the nominations. She said the results were particularly frustrating because 2019 was a breakout year for female directors.

“They were out in strong numbers. This was the year of the highest percentage of female directors that we’ve seen,” she said. “And yet they’re not allowed to be lauded by these cultural institutions for their directing prowess.”

There’s a “complete disconnect,” Smith added, “between objective criteria of merit and what we are seeing in the nominations for directing at the Academy Awards.”

In terms of race and ethnicity, there was disappointment that only Erivo’s nomination for “Harriet” prevented an entirely white slate in all four categories — a scenario that first happened in 2015, resulting in the #OscarsSoWhite hashtag, and again in 2016.

The Academy sought thereafter to diversity its ranks. Since 2015, the group’s overall female membership has grown from 25% to 32%, and overall membership of people of color has doubled, from 8% to 16%.

Erivo, a double nominee for both best actress and best original song, said in an interview from Japan that she hoped this year would be a “stepping stone to opening the doors” to honoring the work of a more diverse group of artists. She paid special tribute to “so much good work specifically by women” like Gerwig and other female directors who were overlooked.

Gil Robertson, president of the African American Film Critics Association, said he wished the acting nominations had been more diverse, but he felt hopeful they were more of a blip than a slide backwards. “I think we’re making strides in the right direction,” he said.

Among the most glaring snubs was that of Jennifer Lopez, who had been seen as a virtual shoo-in for a supporting actress nod for playing a stripper in “Hustlers.” In the lead actress category, Awkwafina, who a week ago won a Golden Globe, was denied a nod for her role in “The Farewell.” She would have become just the second Asian American nominated for best actress (the first, 1936 nominee Merle Oberon, hid her South Asian heritage).

The omission was a reflection of the difficulty Asian Americans in Hollywood have long had in cracking the acting categories in particular.

“It’s been a long, slow battle,” said Chris Tashima, an actor-director and a member of the Academy Asians Action Committee, an informal group of Asian and Pacific Islander members of the Academy. “We’ve been very much absent. We’ve been trying to create opportunities for years. But you can’t even get nominated if you don’t get the roles.”

Tashima added, though, that progress is happening, albeit slowly — with television leading the way in terms of new opportunities. “It’s night and day from five years ago,” he said.

Smith said that for women directors, the key problem is an outmoded view that some Academy members have of what a leader is — a very masculine view.

“What needs to change is that stereotypical view of WHO can lead,” Smith said. “And until that changes, this is going to keep happening.”

She added: “Research globally suggests that when people think ‘manager,’ they think male. We found the exact same thing with directors. … The research is very clear. Women aren’t being considered for top leadership positions, and when they are, they are often criticized more sharply. We’re seeing that playing out right now in the awards process.”

“This is why TIME’S UP exists — to ensure women in entertainment and across industries get the opportunities and recognition they deserve,” she said. “And we won’t stop fighting until they do.”