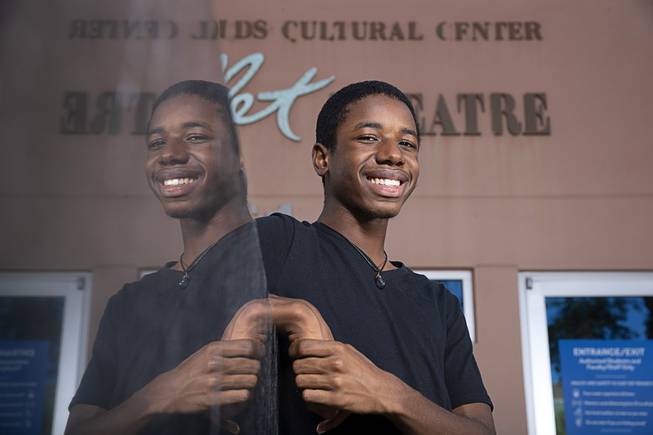 Jemoni Powe will spend hours perfecting a dance routine with the Nevada Ballet Theatre before a performance. He’s a perfectionist, even if it means some constructive criticism from instructors who he jokes give more corrections than compliments.

But when the lights come on, the 17-year-old Desert Oasis High School senior is at his best — even if he’s a little nervous.

“For the longest time I used to freak out every time I went onstage,” he said. “(But I realized) it’s nothing different than what we do in the studio at practice.”

Powe is one of the dance company’s success stories, starting as a 10-year-old in its free GO-MOVE-DANCE outreach program in partnership with the Clark County School District and quickly rising through the ranks.

“We knew he was gifted from the first day,” said Terané Comito, the company’s director of education and outreach.

More dancers such as Powe are surely out there waiting for their talents to be discovered and developed. Comito and Nevada Ballet Theatre are determined to reach them, even if it takes asking for help during the pandemic.

COVID-19 limitations have shelved the annual performances of “The Nutcracker,” which last year brought in a gross revenue of $1.5 million over 13 shows at the Smith Center for the Performing Arts. It can’t be performed remotely because the production features a cast and crew of 150 in tight quarters.

That is a massive blow to the group’s coffers — not to mention the emotional consequences. The show is a Las Vegas holiday tradition, spanning four venues and four versions of the show.

“It’s like a year without Christmas for us,” said Beth Barbre, the CEO of Nevada Ballet Theatre. “The holidays are looking different for us. Typically the studio is brimming with dancers and rehearsals.”

This would have been the 39th consecutive year the ballet company put on the show, which since 2012 has been hosted at the Smith Center. Its revenues keep the company afloat, including the education outreach that provides shoes, outfits and lessons at no charge. It is hosted at 16 at-risk CCSD schools and annually reaches up to 20,000 children.

“If the program didn’t exist, I wouldn’t have been introduced to classical ballet or dance of any sort,” Powe said.

Not every child in the program advances like Powe, who recently was the lead dancer in a video for Grammy Award-winner Gregory Porter and has won numerous competitions. Rather, it’s about introducing children to the arts and helping them gain confidence through learning a routine.

“We try to help set the kids up for success,” Barbre said.

The program, in its 29th year, brings instructors to campus for curriculum on ballet, jazz and hip-hop dance. Students also get to experience the theater by attending matinee shows performed by the theater’s professional company artists. And at the end of the 28-week program, they combine to perform in the Future Dance Spring Concert at the Smith Center.

“It’s a huge loss for the school district and the kids,” Comito said.

Nevada Ballet Theatre, after being closed for part of the pandemic, received stimulus money to help it continue operating. Socially distanced lessons are being conducted at the studio for some students.

The educational outreach operates via digital instruction because CCSD campuses are still closed. But they’ll need more funds to return to full capacity, knowing that many children rely on the program for an introduction to dance. As Barbre says, “Arts are food for the soul.”