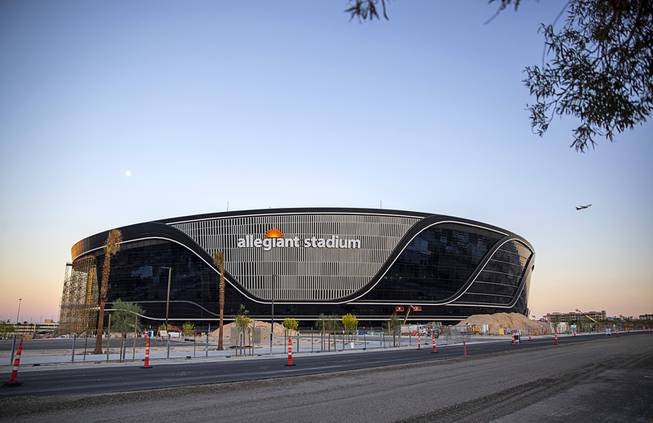 An exterior view of the Allegiant Stadium, home of the Las Vegas Raiders, under construction in Las Vegas Tuesday, May 5, 2020.

Country music superstar Garth Brooks talks to media Thursday, Dec. 3, 2015, as he announces his return to Las Vegas for exclusive performances at the new Las Vegas Arena still under construction and scheduled to open next April.

The first concert event planned at the new Allegiant Stadium just off the Las Vegas Strip has been postponed because of the coronavirus pandemic.

The Garth Brooks tour stop originally set for Aug. 22 — which sold out 65,000 tickets in just 75 minutes earlier this year — has been rescheduled for Feb. 27. All previously purchased tickets will be honored for the new date according to today’s announcement from Allegiant Stadium and ASM Global, the venue management and services company.

Nearly finished and built to host the NFL’s Las Vegas Raiders as well as UNLV’s football games, Allegiant Stadium has also been booked for the Pac-12 Championship Game and the Las Vegas Bowl. With the NFL’s recent cancellation of its preseason games, the Raiders are currently slated to play their first home game in Las Vegas on Sept. 21 against the New Orleans Saints.

The stadium project is expected to generate an economic benefit of $620 million annually, while creating 6,000 permanent jobs in Southern Nevada.