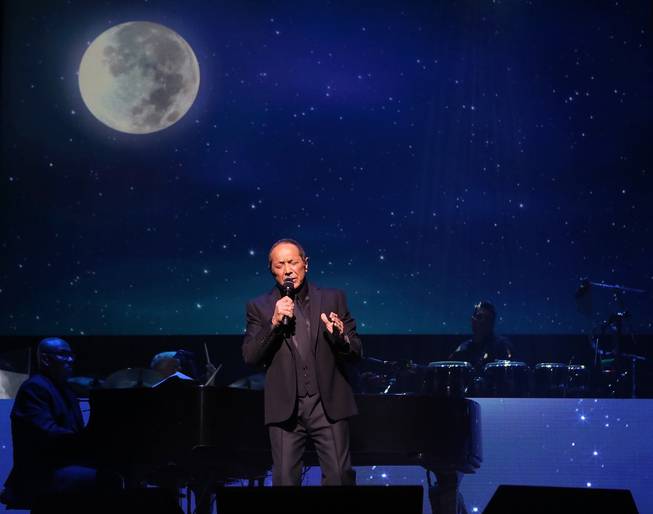 Longtime Las Vegas headliner Paul Anka is back in town this week and he’s looking forward to singing once again at the Smith Center.

“I love that place and I really like to ping pong between there and the Strip,” he says. “The venue itself is amazing. I’ve been working all over Europe this past summer and playing some amazing theaters, but that theater, the acoustics there are amazing. It’s got the right size and esthetics and sound and it’s refreshing to play there because I get a good percentage of locals who don’t want to go to the Strip.”

Anka’s show will be a new to Las Vegas, a mix of the beloved hits of Frank Sinatra — Anka famously wrote the lyrics to the Chairman’s signature song “My Way” — and his own biggest hits from a musical career that spans six decades.

Now 78, Anka started his long and legendary relationship with Las Vegas when he became one of the first pop artists to find consistent success in Sin City in the 1960s. When he started a regular gig at the Sands, “I was by far the youngest in town and everyone else was twice my age,” he says. “No one else really made that transformation from the teen scene to the nightclub circuit, but I was always concerned with what was around the corner. My whole approach was understanding the environment in music, and this was back when Vegas was the Rat Pack. I was trying to break ground and be the first in Las Vegas to ensure longevity.”

He’s been a frequent visiting performer every decade since he got started and is amused by the irony of today’s star policy on the Strip. “Everyone knocked Vegas for years. ‘Oh, the stigma.’ Now look at it, they all have residencies. It’s all about money.”

Of course, Anka’s music and Sinatra’s music have always been a big part of the sound of the city. Current Wynn Las Vegas resident Robbie Williams puts a lot of Rack Pack style into his show at Encore Theater and even sings “My Way.” Anka says that iconic tune is the favorite of business moguls and heads of state, and he’s met enough of them over the years. “I met Putin and thought, this is a tough guy, but he’s like all these guys around the world, CEO’s and leaders. When you sing that song, they melt. They love that song and they sing it like it’s their song.”

Anka still enjoys singing Sinatra’s big songs as well as his own hits like “Put Your Head On My Shoulder,” “Diana” and “You’re Having My Baby.” He says it was easy to create a show from those favorites because the audience never tires of those classic arrangements. The most emotional Sinatra song he performs is “It Was a Very Good Year,” which was written by Ervin Drake and won Sinatra a Grammy in 1966. Gordon Jenkins created the arrangement for Sinatra’s version of the song.

“I do a classic rendition which is interesting because a lot of different groups have done it,” Anka says. “Singing that song is a very poignant moment for me and the most emotional of them all, because it feels very different. A lot of those other tunes do that swing thing.”

He’s also enjoying a robust touring schedule these days and will likely continue to play different venues in Vegas, even though he knows a different opportunity exists in this residency-centric era. But he is planning to move back to Las Vegas from California in the coming years.

“We’ve talked about it and had meetings, I just didn’t really get excited about what it would be,” Anka says when asked about a new Strip residency of his own. “You have to remember, my band and me, we own the space we’re in. I like the flexibility of that. Right now the way we’re moving and how I’m singing, I feel like I’m playing with house money and that’s fine. I’m not looking to settle in because that could interfere with the stuff I really like.”