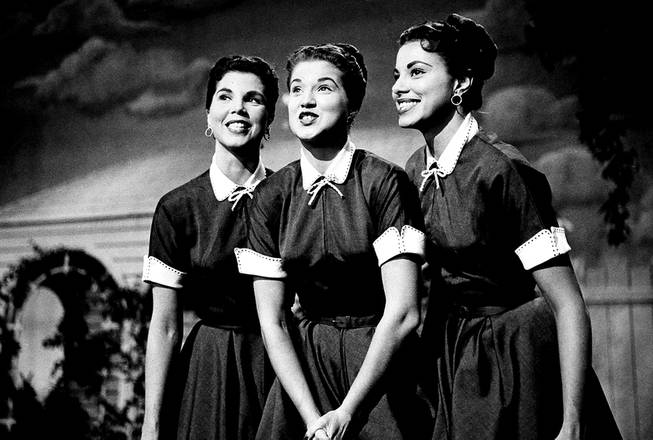 The McGuire Sisters are shown during a performance on Nov. 6, 1953. From left are Christine, Phyllis and Dorothy McGuire.

Phyllis McGuire of the famed McGuire Sisters loved her life in “the Beverly Hills of Las Vegas,” a term she coined for her 26,000-square-foot mansion in the Rancho Circle estates near downtown Las Vegas.

The home includes a 45-foot version of the Eiffel Tower serving as structural reinforcement for the main property on the estate, which is flanked by a pair of guest homes.

McGuire, the last of the living McGuire sisters, died this week at the estate. She was 89.

McGuire reportedly paid $5 million in 1980 for a full-scale renovation on the property she originally purchased in 1967, right around when the McGuire Sisters retired from public appearances.

She shared the estate with longtime companion Mike Davis, an oil tycoon who preceded her in death.

The McGuire Sisters rose to popularity during World War II, when they were in their late teens and early 20s, and would perform at veterans hospitals and during benefits.

“They were amazing. They brought the country together by singing wonderful songs,” said Lovee Arum, one of McGuire’s longtime friends.

The sisters got their big break in 1952 when they traveled to New York from their hometown of Middletown, Ohio, to try out for the “Arthur Godfrey’s Talent Scouts” show. That led to a two-month gig on the national radio broadcast of singer Kate Smith.

Their popularity continued to rise in the 1950s with frequent appearances on “The Ed Sullivan show.” They performed for five U.S. presidents, were friends with the likes of Dean Martin and Perry Como, and had numerous nightclub engagements in Las Vegas in the 1980s after briefly coming out of retirement.

Singer Phyllis McGuire, 64, the youngest of The McGuire Sisters, smiles after receiving a cluster of balloons from longtime friends Debbie Reynolds and Rip Taylor at her home in Las Vegas, Tuesday, Dec. 12, 1995.

Arum says it was McGuire’s glamour that is most memorable. That includes her estate, which features a replica Arc de Triomphe at the entrance, and antiques, Persian rugs and crystal art from the 19th century. The backyard has a tennis court, lavish pool, the “Phyllis’ Place” salon and a bridge leading over a lake toward a guest house.

She initially met Arum while performing with Johnny Carson during an American Cancer Society function. Over the years, Arum was amazed at her friend’s generosity and kindness.

“This is a great lady. This is a really special lady,” Arum said. “She never said no to a charity.”

She was also preceded in death by her two McGuire Sisters siblings, Dorothy in 2012 and Christine in 2018. Together, they produced iconic classics such as “Sugartime,” “Something’s Gotta Give” and “May You Always.”

“Phyllis McGuire was beautiful, talented, and was part of the Las Vegas allure,” Arum said.

“She was the perfection of glamour and entertainment during the most exciting times in Las Vegas. … The Las Vegas community was gifted by Phyllis’ presence as the city grew and developed culturally and philanthropically. Phyllis was always present when asked.”