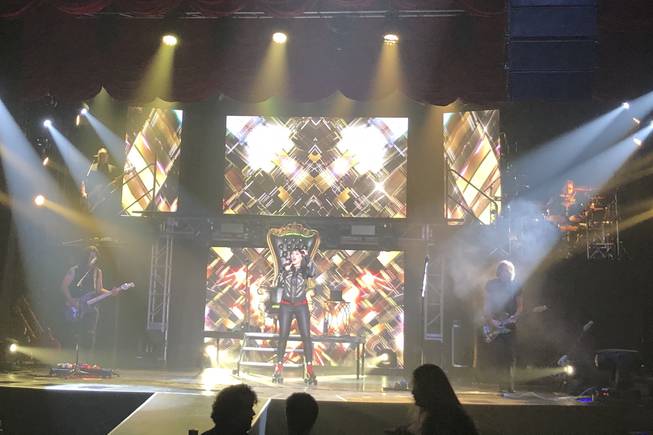 Elyzabeth Diaga fronts the Queens of Rock tribute show at the Mosaic.

Montreal-based singer Elyzabeth Diaga arrived in Las Vegas in late August, excited about launching her musical tribute “Queens of Rock” on the Strip after years of touring and showcasing and searching for a Vegas home for the show. Its first appearance in the Entertainment Capital of the World was at Sunset Station’s Club Madrid in 2017.

“When I first came here, I thought, oh my God, this is the place,” Diaga says of her first Vegas visit in 2015. “I was completely mesmerized and just fell in love with the whole vibe here, and from then on it was only, let’s try to find a way to come here with my show.”

She felt the same way when she first stepped into the Mosaic Theater, the new south Strip venue where the former Club Utopia and Empire Ballroom once operated. “Queens of Rock” was originally set to open at Mosaic in September but the ever-changing circumstances caused by coronavirus pandemic pushed its debut back to October 8.

“When I first walked in, it reminded me of a place in Montreal called the Imperial Theater,” Diaga says. “The vibe in the theater has an old soul but there’s a new feel to it. It’s perfect for me, and the fact that it’s a modular space and you can change the seating is obviously great right now.”

Mosaic proprietor and local promoter Dean Coleman completely renovated the 11,000-square-foot venue and launched with performances of “Aussie Heat” in February and early March before the Strip was shut down. He shifted gears over the summer to operate as a supper club-style venue with live performances but decided to hold off on those plans when directives from state and local safety officials continued to fluctuate.

While several reopened casino shows have been forced to take a hiatus for the holidays, Mosaic is making it work with audiences of 50 people seated at least 25 feet away from the stage. Coleman says his unique model allows the financial flexibility for the three shows to go on.

“What we’ve done is make it more simple for the production company. The shows that come in and work with me, I’m charging an all-inclusive fee that includes rent, advertising and marketing and working with the brokers and the people selling tickets,” he says. “This one feel allows the shows to concentrate on getting back to work, and I own the box office so I can be a lot more flexible [with ticket prices].”

Most Mosaic shows are selling between 35 and 50 tickets for each performance and Coleman says the vast majority of buyers are tourists from Texas, Florida and the Atlanta area. There are only two other venues with multiple shows running on the Strip right now; Harrah’s Showroom houses the Tape Face and “X Country” shows and the Laugh Factory at the Tropicana contains its normal stand-up comedy schedule and Murray Sawchuck’s comedic magic show.

“We’re still making money, it’s just a matter of staying relevant and moving forward,” Coleman says. “We’re not in a casino but we’re still on the Strip and we have our own parking. And our theater has that supper club-style seating arrangement with individual tables and booths, so even with them being six feet apart, it still feels intimate. It’s like stepping back into time, how it was when you would go see the Rat Pack.”

Even though the audience is small and the publicity can only be a small percentage of what a new Vegas show would hope for, Diaga still feels like performing “Queens of Rock” at Mosaic is a dream come true. She’s singing classic rock hits from Heart, Joan Jett, Pat Benatar, Debbie Harry and many more backed by a versatile and experienced band including Christian Brady and James Oleson on guitar, Zach Throne on bass and Alex Papa on drums.

“We are lucky. The whole team at Mosaic is working so hard to make it safe for everybody,” she says. “And the people who are coming are so excited, and I’m so excited. If you come see the show you’ll understand. As soon as I walk on the stage, that’s the best place for me to be in life. This is a lifetime in the making, to have a stage and sing my favorite songs.”