Saltgrass Steakhouse has opened at the Golden Nugget. The Texas-born chain operated by Landry’s, which also owns the Downtown casino, has dozens of locations across the country and specializes in “campfire-style fare” including steaks, seafood, chicken and baby back ribs. Vic & Anthony’s at the Golden Nugget remains open. Saltgrass is open for dinner Thursday through Saturday from 4 until 10 p.m., and for breakfast, lunch and dinner on Sunday from 10 a.m. until 10 p.m. 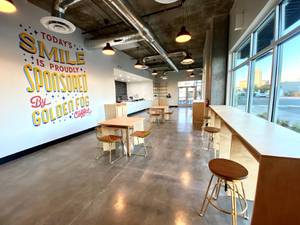 Trustworthy Brewing Co. at the Grand Canal Shoppes at Palazzo has reopened and is offering new specials during college and pro football games, including 24-ounce drafts of its own freshly brewed beer ($9), 16-ounce drafts with a shot of Jim Beam ($12) and Jim Beam cocktails ($9). A full food and drink menu is available on Monday and Thursday through Friday from 11:30 a.m. until 10 p.m., and Sunday from 11:30 a.m. until 9 p.m. Sunday.

Golden Fog Coffee is set to open Saturday at the new Share Downtown residential complex in the Arts District. Owned by native Las Vegan artist Derek Douglas and his wife, Juliet, Golden Fog will exclusively carry Sightglass Coffee from San Francisco and a vegetarian menu of pastries and grab-and-go snacks. To celebrate the opening, the shop will offer free drip coffee all day and 20 percent off all other menu items. Golden Fog Coffee will be open Monday through Saturday from 7 a.m. until 7 p.m. and Sunday from 7 a.m. until 5 p.m.

Sparrow + Wolf on Spring Mountain Road has launched an exclusive partnership with Pop N’ Pies chef and owner Andrea Mclean to co-create seasonal pie flavors for the dinner menu. The unique flavors will also be available for retail only through the Sparrow + Wolf pantry. The first item is an egg custard-inspired pie with sweet red bean sauce ($8 per slice or $24 for whole pie) 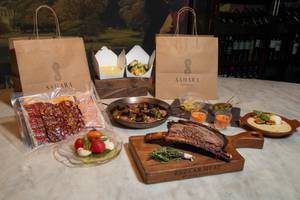 Bazaar Meat at Sahara Las Vegas has launched its first-ever takeout menu offering large-format meals serving up to three people as well as a la carte selections, desserts and drinks. Selections include the Rosewood Texas ribeye ($170), Chateaubriand of Brandt beef tenderloin ($150), Secreto Iberico pork ($110) and Merino lamb rack ($110), each of which can come cooked to your desired temperature or uncooked with step-by-step instructions to prepare at home. Entrees include a selection of five starters and a la carte offerings include the Bazaar burger, Catalan pork sausage, fire-roasted leeks and more. Orders must be placed online at saharalasvegas.com/promotions/order-to-go-from-bazaar-meats-takeaway-menu/.

To Be Frank is now serving specialty hot dogs and sausages via delivery, takeout and catering out of East Charleston eatery Every Grain. The menu includes the Thai Dog, an Issan Thai sausage with green papaya slaw, kewpie mayo, red onion and crunchy peanuts, and the Kimchi Dog with creamy gochujang, white kimchi, scallion relish and goldenaise. Side dishes include coleslaw, German potato salad, chili and Tim’s Chips. For more information, visit tobefranklv.com.

SkinnyFats has launched a spin-off concept called Blaze of Thunder inspired by its hot chicken sandwich of the same, and the new menu is available exclusively at the drive-thru window at SkinnyFats on Stephanie Street in Henderson. Offerings include the Blaze of Thunder sandwich with pickles and coleslaw on a Hawaiian bun, chicken tenders with pickles and ranch, mac and cheese, Cajun fries, apple crumble and more.

Lotus of Siam has released its own ordering app, available on iPhone and Android and built-in collaboration with ChowNow, and also restored weekday lunch hours at the Commercial Center location Monday through Friday from 11 a.m. until 2:30 p.m. The restaurant also recently added new sake and wine cocktails.