On Thursday, when the Cromwell becomes the last major casino resort on Las Vegas Boulevard to reopen after the March shutdown, the hotel and casino will be open seven days a week and restaurants Giada and Eatwell will be open. The Bound and Interlude cocktail lounges also reopen, and Drai’s After Hours will resume operations as Drai’s Lounge.

MB Steak by brothers David and Michael Morton, one of only three food and beverage outlets remaining as the former Hard Rock Hotel transforms into Virgin Las Vegas, will get a new name to match its extensive renovation prior to reopening with Virgin on January 15. One Steakhouse “is a culmination of their combined life experiences and training, from family meals to following in the footsteps of their father, legendary restaurateur Arnie Morton, and their grandfather, Morton C. Morton,” according to Thursday’s announcement. Executive Chef Patrick Munster remains at the helm in the kitchen and has developed a new menu to match the restaurant’s refreshed and expanded bar and lounge, intimate dining room and high-energy upper level. Virgin also unveiled some of the details of its five-acre pool and entertainment complex, including the Promenade, a meandering pathway encompassing several dining and drinking experiences with outdoor access including Todd English’s Mediterranean favorite Olives, the Hakkasan Group’s Mexican cantina Casa Calavera, Nick Mathers’ Kassi Beach Club and sports bar upgrade Money Baby. The resort pool and some of those venues will open in March. 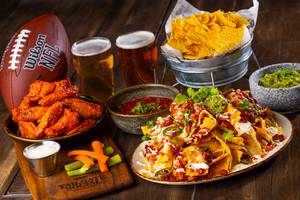 Get ready for wings, nachos and much more at Tailgate Social in November.

As reported by the Las Vegas Sun on Friday, 16-year Strip favorite Mesa Grill at Caesars Palace is set to close on November 14 to make way for a new concept from celebrity chef Bobby Flay, Amalfi. “We have all learned during this unfortunate pandemic, and one of the things I’ve held closely to is to focus on the things you’re most passionate about—for me, right now, that passion is Italian cuisine, especially from the Amalfi coast,” said Flay. “Food in Amalfi is known for two things, the fish that comes out of the water and pasta. I want to bring the best of the region to Caesars Palace, and every dish that is served at the all-new Amalfi will evoke the flavors and feel of Italy.” Amalfi is scheduled to open in spring 2021 with a menu including light antipasti, rich pasta dishes, whole fresh fish and a seafood display inspired by Italian markets. Flay’s most recent opening in Las Vegas was also fish-focused, the South American-inspired Shark at the still-shuttered Palms.

The Laundry Room at Commonwealth on Fremont East has unveiled an expanded cocktail menu and a physical expansion of its rooftop experience, which is now accepting reservations. The rooftop has transformed into a lounge with 360-degree views of Downtown and “vintage” performances with burlesque dancers, lounge singers, jazz bands and DJs. Reservations are available via text message at 702-701-1466.

Locals can take advantage of exclusive specials at Gilley’s Saloon at Treasure Island during Homegrown Sundays every Sunday from 4 to 11 p.m. Rotating food and drink specials such as the Cowboy Burger or Southern fried chicken and $6 16-ounce drafts are available only to Las Vegans with valid ID.