In case you missed it, the Rio became one of the last Strip-area casino resorts to reopen just before Christmas. (Across the street, the Palms remains shuttered.) Penn & Teller joined other Caesars Entertainment performers to help distribute 20,000 turkeys and cookies to other Las Vegas team members on December 22. Restaurants and bars now open at the Rio include the All-American Bar & Grille, Hash House A Go Go, VooDoo Steak, Smashburger, KJ Dim Sum & Seafood, iBar, Purple Zebra and the Masquerade Bar.

The Great Greek Mediterranean Grill has opened a second location in Henderson at 3552 St. Rose Parkway. The new 2,400-square-foot restaurant is open for lunch and dinner from 11 a.m. until 9 p.m. Sunday through Thursday, and 11 a.m. until 10 p.m. Friday and Saturday. 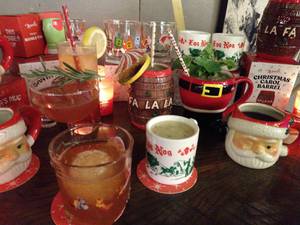 The Miracle on Spring Mountain continues at the Sand Dollar.

Local vegan web powerhouse Vegans, Baby is bringing back its Vegan Dining Month initiative for the fourth consecutive year in Las Vegas to support local restaurants and encourage diners to explore plant-based meals. You don’t have to sign up to take the Veganuary pledge to sample from the more than 20 Las Vegas restaurants participating in this year’s campaign, including Honey Salt, Bronze Café, the Juice Box, Guerrilla Pizza, Hussong’s Cantina, Lucino’s Pizza, Maker’s & Finders and Tacotarian. Participating restaurants will donate a portion of proceeds this year to the Progressive Leadership Alliance of Nevada. For a full list of restaurants and menus, visit vegansbaby.com.

Marche Bacchus in Desert Shores is offering a New Orleans-style New Year’s Day Jazz Hangover Brunch featuring music from the jazz trio of Dave Stambaugh, Tyler Williams and Dirk K, and an a la carte brunch menu including chicken and Andouille gumbo, oysters Rockefeller, crab cakes, truffled grits and grillades and more, from 11 a.m. until 3:30 p.m. on January 1. Bottomless mimosas and Champagne are available for $20. Reservations can be made by calling 702-804-8008.

Sparrow + Wolf in Chinatown is offering a special Hangover Brunch Kit for New Year’s Day via the Sparrow + Wolf pantry. The “party in a box” feeds four and features some of the pantry’s most popular take-home items, including the Bloody Hanoka-San mix with Sobieski vodka, a fresh-baked loaf of sourdough bread, assorted charcuterie, a wheel of cheese, take-and-bake duck confit cinnamon rolls with foie gras frosting and more. Order online at sparrowandwolflv.com.

The Sand Dollar Lounge has extended the Miracle on Spring Mountain pop-up bar event through January 10. In addition to the continuation of the Winter Wonderland décor and specialty cocktail menu, new pizza pop-up nights have been added starring Nick Dugan on January 3 and Adam Sobel on January 10.