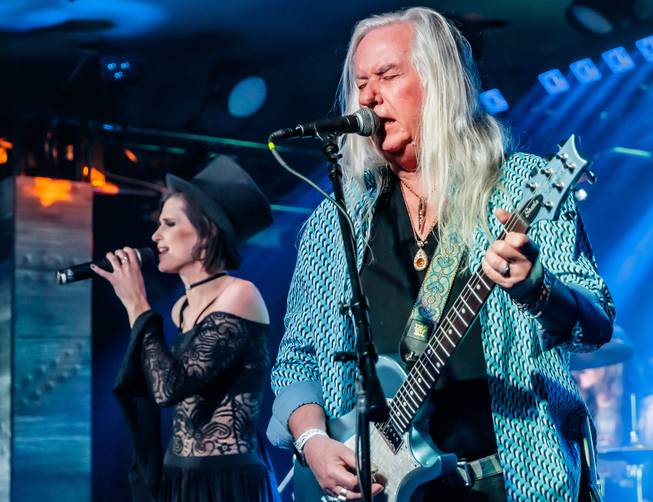 Megan Ruger and Howard Leese in “Raiding the Rock Vault.”

The hard-charging and endlessly fun “Raiding the Rock Vault” opened at its fourth home in nearly seven years in Las Vegas this month, exploding onto the stage at the 172 music club and restaurant near the Chippendales Theater at the Rio. The show features classic rock hits from the ’60s, ’70s and ’80s performed by all-pro musicians who’ve been singing and playing with those legendary acts for years. It originated in Vegas in the spring of 2013 at the Las Vegas Hilton and has persevered through moves to the Tropicana and Hard Rock Hotel.

At the Rio, it makes great use of its upstairs nook to create a sort of Sunset Strip vibe and the KISS mini golf attraction is a quick escalator ride away, so there’s that. The 172 space was planned as an intimate live music venue hosting touring and local acts but is now focused on hosting the “Vault” and the rock-and-roll-themed burlesque production “Little Miss Nasty.”

The folks who are turning the Hard Rock Hotel into Virgin Las Vegas wanted to bring the “Vault” back when the resort re-opens later this year (it closes after the Super Bowl) so time will tell if 172 proves to be a better home. When I visited Wednesday night, the room was packed and the music was powerful and you can even order sushi and snacks from the tables in the back of the room, rounding out the experience.

The “Vault” really is a time-tested tour of rock through the generations, opening with songs from the Woodstock era including two standouts, the Jimi Hendrix version of Bob Dylan’s “All Along the Watchtower” and the Rolling Stones’ epic “Gimme Shelter.” Joyfully making up the band that night were Howard Leese and Rowan Robertson on guitar, Blas Elias on drums, Michael T. Ross on keyboards and Dan Grennes on bass. These veteran players are having just as great a time as the audience while reeling off these classics.

The loudest cheers came during the precisely played “Hotel California” and “Stairway To Heaven,” naturally, and ’80s mega-hits “Livin’ On A Prayer” by Bon Jovi and “Separate Ways (Worlds Apart)” by Journey. I just saw Journey at Caesars Palace in October and Bon Jovi recently announced a tour stop at T-Mobile Arena coming this summer. The ever-surging popularity of this music in Las Vegas is evident with each performance in “Raiding the Rock Vault.” But it always feels like a celebration of rock and never a corny tribute show, thanks to the performers’ extreme skill and enthusiastic presence.

Leading the way Wednesday were vocalists Paul Shortino (of Rough Cutt and Quiet Riot), Todd Kerns (from Slash’s band the Conspirators and the Age of Electric), John Bisaha (from The Babys) and Megan Ruger. Each had shining moments while sharing mic duties, including Shortino doing the Doors, the three men teaming up for extra electricity during “Hotel California” and “Stairway,” and Ruger scorching the Heart hit “Alone,” a tune that really resonated when Leese took the guitar solo. He was a member of Heart for more than 20 years and recorded that same solo for the band’s cover of the song on the 1987 album “Bad Animals.” It was Heart’s biggest chart hit, spending three summer weeks on the Billboard Hot 100.

I remember watching that video on MTV for what seemed like forever during my early years in Las Vegas. Another cool connection in this show is Elias pounding away at the back of the stage, the original drummer for Vegas-born metal act Slaughter and a versatile artist who also performs with the Blue Man Group and tours with the Trans-Siberian Orchestra.

The “Vault” packs so much music into approximately 90 minutes, even rampaging through several medleys to incorporate favorite riffs and choruses. The band steers Fleetwood Mac’s “Dreams” into Aerosmith’s “Dream On” and Def Leppard’s “Pour Some Sugar On Me” into Robert Palmer’s “Addicted to Love.” From Queen to Van Halen, there’s no sub-genre this group can’t handle, and that makes this a must-see for faithful fans.