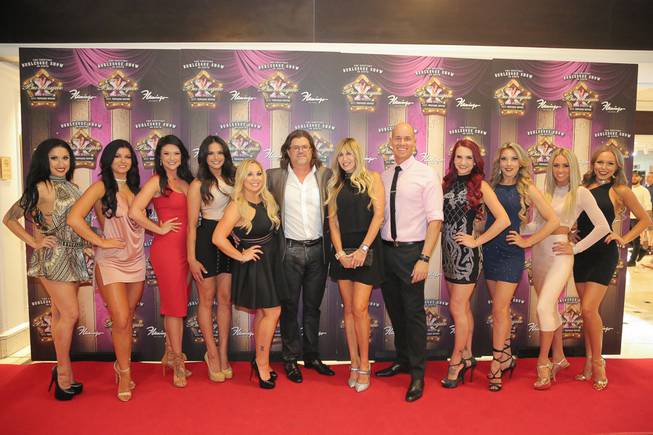 The “X Burlesque” team celebrates the show’s anniversary at the Flamingo on May 24, 2018.

Sexy showgirls, topless revues and tantalizing burlesque-style shows have always been a prominent part of the Las Vegas entertainment landscape and certainly an even bigger piece of the city’s iconography and “Sin City” reputation. And during the COVID era, when Vegas shows have struggled to survive and faced greater challenges than ever before, this genre has proven to be among the most enduring and resilient.

“I guess the bottom line is sexy revues and showgirls are a staple in Las Vegas. They have been since the 1950s and when people come to Las Vegas, that’s one experience they usually want to have,” says Angela Stabile. “That’s one of the things you need to do here that you can’t do anywhere else.”

Stabile performed as a dancer and showgirl in “Lido de Paris,” “Crazy Girls” and other shows before becoming the producer of some of the most popular revues on the Strip. Stabile Productions reopened “X Country” at Harrah’s Las Vegas on October 22 — the first Strip casino production show to return after the March shutdown — and it has continued performances despite tighter restrictions installed in November limiting audiences to just 50 people.

This week, Stabile Productions has found a way to bring back its original revue “X Burlesque,” which has performed more than 9,000 shows since opening at the Aladdin in 2002.

The “private edition” of “X Burlesque” opens Thursday with performances planned for 7 and 10:10 p.m. Thursday, Friday and Saturday nights at the Flamingo. Two tickets are priced at $199 including taxes and fees and guests will also receive a bottle of Champagne and a signed poster and the renovated show will include a first-ever question-and-answer session with the cast. Guests must be 21 years or older and ticket info can be found at caesars.com.

The show returns to the same venue, the X Burlesque Theatre at Bugsy’s Cabaret at the Flamingo, despite the normally 160-seat theater’s intimate space. The room is only about 35 feet deep and the audience will be capped at 30 people. 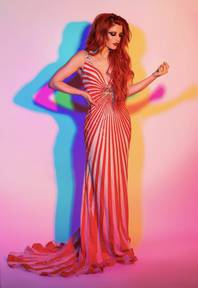 You can see Anne Martinez sing these days with the Red Penny Arcade at the Grand Canal Shoppes.

“Because of the 25-foot distance rule (between the stage and the audience), we’re putting the seating along the back rim of the room and adding another couple of tables to get it up to 30,” says Matt Stabile, Angela’s husband and producing partner. “That’s why we’re also making the show more of a private experience.

“We’ve sold tickets in the past called the pink circle, a higher-priced ticket, maybe 20 a night, and the seats are very close to the pole in the middle and the dancers would walk by and sometimes touch them. We’ve always sold those well so we decided to go with that formula, a higher price with a bottle of Champagne, and then we’re doing something unique with the Q&A.”

Longtime “X Burlesque” comedian Nancy Ryan will be guiding the Q&A session at the end of the show. The Stabiles continue to discuss opportunities to bring back the other “X” show, “X Rocks” at Bally’s, with their partners at Caesars Entertainment, but right now the focus is on continued 50-ticket sellouts for “X Country” and relaunching the special version of “X Burlesque.”

Another staple Strip revue, “Fantasy” returned to Luxor on November 6 in a different theater, but MGM Resorts re-shuttered most of its live entertainment around Thanksgiving when the 50-person rule fell into place.

One of that show’s swing performers, singer Anne Martinez, says the adjustment from its Atrium Showroom to the much larger theater on the Luxor casino floor provided some interesting obstacles, but the “Fantasy” team had cleared them and was enjoying success.

“That stage is deep and wide, just a really big stage, and the show is very intelligently choreographed and we had to readjust all of that,” she says. “But [dance captain] Yesi [Burgess] and [associate producer] Mariah [Rivera] were fabulous. It was wild but really fun, and once we got onstage everyone worked together so well.

“As a performer, your number one job is to tell a story. When you’re performing in a more intimate space, you dial it in a little bit,” Martinez continues. “But when the space is a little bigger, you have to be bigger so they can see us and hear us and the performance really sticks with you. And everyone was up for that challenge. If you believe in yourself and what you’re doing, the audience will come with you. They just can’t resist it.”

The intimacy of this style of show is obviously one of its biggest draws, and performers have been able to create that feeling in a different way despite singing and dancing while wearing masks and being unable to come in close contact with their audience members.

Martinez also has been performing in a renovated version of the Westgate’s resident revue, “Sexxy,” which has been presenting a different style of show at Larry Flynt’s Hustler Club just south of the Strip. Producer, choreographer and star Jennifer Romas — who also engineered a drive-in version of the show during the summer months of 2020 — launched the “Sexxy After Dark” shows at the gentlemen’s club in early December and continued the limited engagement through New Year’s Eve weekend.

“I didn’t really know what to expect because I don’t know that world at all, but I’ve been so impressed with how nice everyone is at the club,” Martinez says. “We didn’t have a lot of time to get it together, and the stage is very [different]. It was a little like playing pinball at first, getting around it. But that’s the genius of Jen. She just went in and never complained and said, ‘This is what we’ll do,’ and that’s why it looks good and it works.”

With the 50-person rule solidly in place until mid-January and no sign of loosening restrictions, there are no plans to reinstate “Sexxy” at the Westgate soon, which could lead to more shows at the club.

At least one brand-new burlesque show has popped up during the pandemic. “BurlesQ” made its debut on December 18 in the Athena Showroom at the Alexis Park Resort just off the Strip, a Roaring ’20s-themed variety show hosted by former “Fantasy” comedian Sean E. Cooper and featuring six showgirls and guest ventriloquist April Brucker.

“While a sexy show, [“BurlesQ”] isn’t topless and isn’t all girls dancing around for 70 minutes. It’s a true variety show,” says Pete Housley, executive producer and CEO of Admit VIP Entertainment, which manages a variety of shows at Alexis Park and other resorts. “The issue that most shows face is dealing with the enormity of the 25-foot, socially distanced moat between guests and the performance area and it’s one of the reasons we built ‘BurlesQ’ to use the classic showgirl costumes that were a staple of Las Vegas for decades, because the costumes themselves are larger than life.”

Both “BurlesQ” and Admit VIP’s “Motown Extreme” shows are sold out through Saturday’s performances, Housley says, noting that the “BurlesQ” artists have focused on maintaining high levels of energy onstage in order to make guests feel comfortable and enjoy the experience despite limitations and restrictions.

“We are very humbled that we’re allowed to operate at this time at all,” he says. “We do not take that or the health and safety of our guests, cast and crew for granted, and we sincerely appreciate all of the difficult decisions being made every day by health and government officials.”

Vegas showbiz folks have proven their resiliency time and time again before and during the pandemic, but there’s something about these sexier offerings that continues to resonate with visitors and audiences in a special way.

“It’s because it’s exclusive. You can’t see a topless show with that caliber of talent anywhere but Vegas,” says Martinez, who has performed in many different styles of shows in Las Vegas throughout her career. “These women are legit showgirls, they’re extremely talented and there are not only incredible dancers, they’re also aerialists and acrobats and more. It’s an experience. People come to Vegas because they want to see something naughty and sassy they can’t see at home and that’s why these shows do so well.”