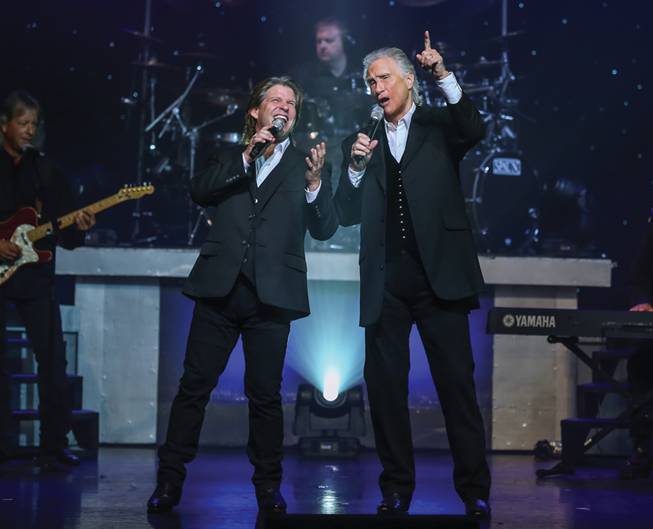 The Righteous Brothers, Bucky Heard and Bill Medley, are the first Las Vegas Strip headliners to launch a series of livestream shows during the pandemic-caused live entertainment shutdown.

Like his fellow Las Vegas Strip headliners, Bill Medley is really looking forward to the time when he can get back onstage to perform for live audiences. Until that happens, the Rock and Roll Hall of Famer and founding member of the Righteous Brothers is keeping busy creating a series of special livestream shows this month produced in Las Vegas at the Space.

Medley, who turns 80 on September 19, said the online performances are a very welcome respite from a difficult period of time. His wife Paula Vasu passed away in early June, bringing sadness to an already challenging segment of his storied career and life.

“I’ve been trying to work my way through that and that’s part of why I’m so excited about doing these shows. It gives me something to do other than sit around looking at these walls,” said the legendary baritone singer who famously teamed with the late Bobby Hatfield to record “You’ve Lost That Lovin’ Feelin’” and other hits among the most iconic pop songs of the 1960s. “It’s already been very good just preparing to do the shows and once we get the first one under our belt and get comfortable with it, it will be a lot of fun.”

Heard, a regular guest performer in the semi-monthly Mondays Dark charity shows created and produced by Mark Shunock at the Space, brought Medley to the August 10 edition of Mondays Dark, which has shifted from live-audience shows to livestreams during the pandemic, and that visit sparked the idea of the Righteous Brothers series, set for 6 p.m. on September 9, 16, 23 and 30. The pay-per-view ticket is $30 and can be purchased and viewed at thespacelv.com or events.broadwayworld.com.

“This is all brand-new to me, but it’s a different kind of day. All performers are trying to reinvent what they do in some way to stay busy and stay active,” Medley said. “I’m just excited by being around it and being busy artistically because it’s been too long that we’ve been out of work. This is the longest I’ve been out in 60 years.”

Wednesday’s kickoff show should prove to be a very different and customized experience for fans of the Righteous Brothers or Vegas visitors who’ve seen Medley and Heard sing at Harrah’s. They’ll sing the greatest hits from various eras but there will also be some conversation and storytelling shedding light on how those songs came to be, as well as special guest appearances from TV and music legend Paul Shaffer and actor and musician John Stamos.

“This is something that came together quickly but everything Bucky and I have done since we reformed the Righteous Brothers has happened this way. We just see something we want to do and how we want to do it and just go for it,” Medley said. “I’ve been finding out in the last few years that people really love the music and want to hear the music, but they really want to know what you were thinking when you recorded it, how you got to that song and what you were going through at the time.”

The Righteous Brothers’ history in Las Vegas started when Frank Sinatra brought the duo to perform at the Sands in 1965, Medley said. The Righteous Brothers split up in 1968 and pursued separate musical projects, including a long run of solo shows for Medley in Las Vegas at various casino venues. They reunited in 1974 to record and tour again and surged in 1990 when Hatfield’s recording of “Unchained Melody” became a hit all over again due to its placement in the movie “Ghost.” Hatfield died of heart failure in 2003.

Medley said he wasn’t planning on reforming the Righteous Brothers with a new singing partner — even though fans and the music media had called for it over the years — until he became friends with Heard and saw him perform in a tribute show in Branson, Missouri.

“It absolutely blows my mind,” Heard said of performing with Medley. “He came to Branson in 2006 where I was already working with Andy Williams and I had a big horn band, and Bill came in with Paul Revere and the Raiders and we just got to be buddies. He sat in with my band a bit. And then later, I was working with ‘Legends in Concert’ and hadn’t seen Bill in a while when we went to a mutual friend’s wedding.

“I had quite ‘Legends’ and I was teaching musical theater and doing this tribute show with [music] from Journey and Creedence Clearwater Revival, and Bill heard me say Journey and he made a face and said, ‘Can you sing those songs?’ I had him come to the show and he stayed for a long time, and then he told me how he didn’t think I could do it. So I said, ‘Oh, you came to watch me die onstage?’ And we laughed, but then we went to lunch and that was when he asked me to do it.”

Medley said transitioning from a solo act back to a duo was very comfortable, thanks to Heard’s talent and hard work.

“It was a lot easier and more comfortable than I thought it would be because Bucky is such a pro, such a wonderful guy and such a great singer,” he said. “It wasn’t all that different being onstage with Bucky and performing as the Righteous Brothers. It was a little like going home.

“Being on my own was a little tougher. You’re up there by yourself, which is fine, but I guess over the years I got so accustomed to having a partner and bouncing things off someone, it felt really good.”

Heard said he’s also excited about taking the duo’s show in a different direction for the livestreams, especially this month.

“Bill is turning 80 this month and I can’t imagine him not being onstage during his birthday month,” he said. “I’ve done a few Mondays Dark shows and Mark [Shunock] is a good friend, and it was kind of divine intervention that Bill just happened to be in town [in August] and came with me. And Bill sat down with Mark [during the show] and they were really comfortable with each other, talking about music and everything.

“When Mark started telling us we should do the livestream, he was talking about scaling down our show, talking to Bill at the piano and singing songs. But Bill is all or nothing. We’re bringing in the band and three singers and it looks really sharp.”