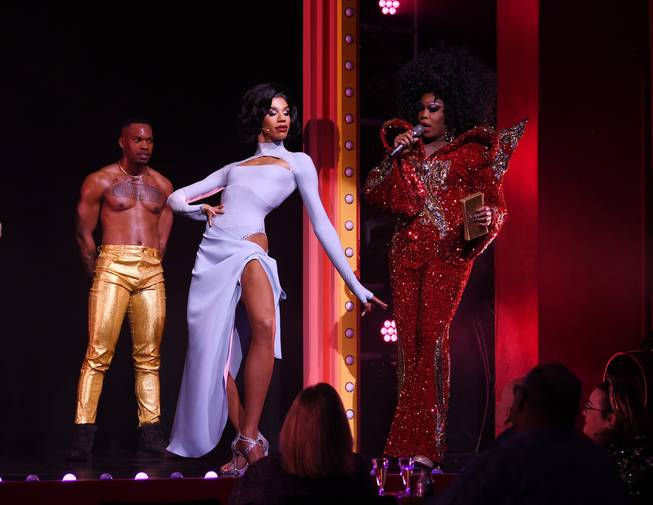 The new resident production at the Flamingo Showroom is powered by the same joyous celebration of individuality that made its TV version an international phenomenon, but you don’t have to be a fan or follower of “RuPaul’s Drag Race” to appreciate and enjoy “RuPaul’s Drag Race Live” in Las Vegas. I’ve never seen a single episode of the long-running reality competition series, but after catching the new stage version of the show last week, I’ve got the February 28 premiere of season 12 on my calendar.

Directed by RuPaul and longtime collaborator Jamal Sims and produced by World of Wonder (the creative team behind the Emmy-winning TV show) with Voss Events and Live Nation, “RuPaul’s Drag Race Live” opened on January 30 in the center-Strip showroom that has been home to Donny and Marie Osmond for the past decade. The format loosely follows an episode of the TV show, with competing queens showing their skills in lip-sync, on the dancefloor and on the runway, bolstered by stunning sets and a booming soundtrack of original music and songs from the past 11 seasons of “Drag Race.”

The cast includes a rotating roster of queens and the six-man Pit Crew dance squad and the audience supplies all the energy. Every time their favorite personality from the TV show took to the stage, a different booth in the audience shrieked and screamed their support and the cumulative result of all this exuberance is a jubilant, victorious vibe I’ve never witnessed in this venue.

That unique feeling is just as fun and impressive as the wildly charismatic performances of Derrick Barry, Kameron Michaels, Naomi Smalls, Vanessa “Vanjie” Matteo, Yvie Oddly and host Asia O’Hara. Video clips interspersed with live performances add the right amount of RuPaul to the show and add structure and guidance, but these queens truly captivate, taking turns one-upping each other throughout the night with distinctive moves and style. Smalls brings over-the-top glamour, Michaels brings unbelievable athleticism and undeniable presence, and Barry’s peerless portrayal of Britney Spears could be its own show. O’Hara brings all the laughs and interacts with the audience with charm and grace. The music, fun and wild fashion just keep coming.

As exciting as it is to see “Drag Race Live” succeed right out of the gate, it’ll be even more interesting to see how the show evolves as the cast changes and it picks up more momentum. Current Strip headliners Lady Gaga and Christina Aguilera have appeared on the TV show and it’s safe to say these and other celebrities will likely be checking out the Vegas production when they’re in town.

“RuPaul’s Drag Race Live” is performed at 9:30 p.m. Tuesday and Thursday through Sunday at the Flamingo Showroom (3555 Las Vegas Blvd. South, 702-777-2782) and more information can be found at flamingolasvegas.com.