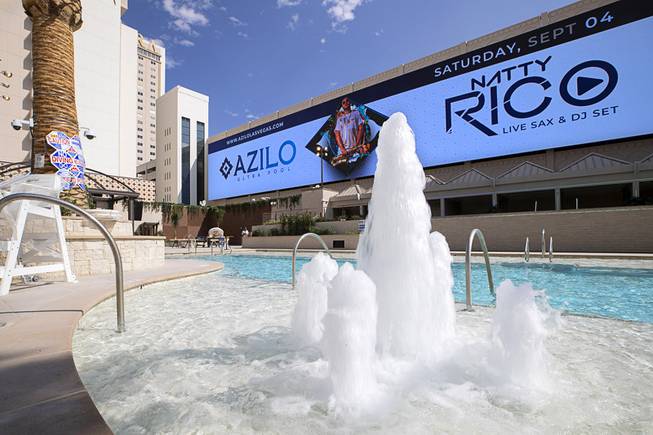 A view of the Azilo Ultra Pool at the Sahara Tuesday, Aug. 24, 2021. The remodeled pool area includes a 240-foot-long by 40-foot-tall LED screen. The pool is scheduled to open on the Labor Day weekend.

The promise of excitement at Sahara Las Vegas in 2021 has officially become a reality.

The legendary Las Vegas Strip casino resort first opened in 1952, changed ownership several times as places like this usually do, went through a challenging period as SLS Las Vegas from 2014 to 2019, and returned to its original name two years ago after the Meruelo Group purchased it in 2017.

A continuing $150 million renovation has already drastically altered the look and feel of the casino, the lobby area and various hotel rooms and spaces, but the middle part of this year is bringing big changes and additions in entertainment, nightlife and dining. The successful “Magic Mike Live” show created by movie star Channing Tatum finally reopened in Las Vegas in a new 450-seat theater at the Sahara last week, and the 35,000-square-foot Azilo Ultra Pool is planning a soft opening during the upcoming Labor Day weekend. 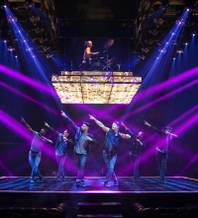 “Magic Mike Live” is back onstage in Las Vegas, now playing at the Sahara.

“There’s a lot happening here,” said Yannick Mugnier, a longtime Las Vegas nightlife executive who recently became vice president of development for the Meruelo Group. “It’s been really pleasurable to interact with [owner Alex Meruelo] because he’s always so enthusiastic about an idea and then going after it and developing it. And he’s looking at the long term, which is great. I can’t say enough about all the projects and things happening at this property over the next year and half or two years.”

Azilo, an indoor-outdoor entertainment venue taking over the space of the Sahara’s main resort pool and former Foxtail dayclub and nightclub, is covered in upscale Moroccan-style décor and approximately 10,000 square feet of LED screen surfaces, designed as the ultimate place for private and corporate events as well as live music performances, club-style DJ performances, sports watch parties and more.

Even though it’s opening up before the end of summer, the space was not created to compete with the major pool parties and dayclubs on the Strip, Mugnier said.

“We are taking a different approach. We’re not a dayclub, we’re an entertainment venue that will host mainly concerts, DJ activations, an upscale brunch, and [private events],” he said. “It’s a really cool space and it’s scalable. This whole environment can change so … it’s going to be quite a unique experience. Within the range of 2,000 people, it will probably be one of the best places to have a party or an event.”

Azilo will line up a few concerts and events before winter arrives but will hold off until next year to really shift into high gear and show its full capabilities, Mugnier said. On September 25, it will host the afterparty for the grand opening celebration of “Magic Mike Live,” which performed its first public show at the Sahara Friday night.

The alternative to the traditional Vegas male revue has grown a lot since it first opened at the Hard Rock Hotel in 2017, expanding to include touring and resident shows in London, Berlin and Australia. Executive producer Vincent Marini said the construction of the new Magic Mike Theater at the Sahara and the reopening of the flagship production in Las Vegas represents the culmination of all the experience the team has gained in the last four years.

“We’ve learned a lot since the first time and really figured out what is the perfect place to enjoy the experience,” Marini said. “For the first time we have this entire lounge experience prior to and after the show, so you scan your ticket and that gets you into this gorgeous bar and lounge where you can hang out, have a drink and chill before the show and afterwards there’s another atmosphere there to come out to.”

Unlike its previous Vegas venue, this theater was designed and built specifically for this show. There are ziplines that can carry performers across the room in seconds and second-level glass-ledge stages that circle the space “so that even when you’re on that level, there are people performing inches away from you,” Marini said. “We were able to find ways to make sure every seat has a really unique, cool and fun experience, and access to the performers so you never feel like you’re far from the action.”

He noted the entire cast and crew of the show have all been fully vaccinated with the goal of making the audience feel as safe and secure as possible, and “Magic Mike Live” is requiring ticketholders to show proof of vaccination or a negative COVID test for admission.

Another big Sahara development is expected in September with the opening of Chickie’s & Pete’s, the Philadelphia favorite voted ESPN’s top sports bar on the East Coast. The bar and restaurant will take over the indoor-outdoor space that faces Las Vegas Boulevard and is currently hiring for 60 open positions across the front and back of the house.

There are two other previously announced new dining concepts following Chickie’s & Pete’s, a Chinese restaurant called Noodle Den and chef Shawn McClain’s new Italian concept Ballo. Mugnier said the resort is planning to collaborate with chef José Andrés for another dining outlet to go along with his successful Bazaar Meat, which is the only remaining restaurant from the SLS days.

Next up will be the Sahara’s theater, where a full revamp is expected to commence soon to create a new state-of-the-art venue. Formerly known as the Foundry, the theater is currently home to comedian Eddie Griffin’s ongoing residency Monday through Wednesday.