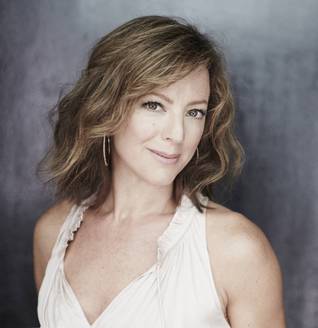 She’s probably best known for founding the Lilith Fair traveling music festival that spotlighted female artists and women-led bands in the late 1990s, or perhaps for her ubiquitous hits “Angel,” “I Will Remember You” and “Sweet Surrender.” But three-time Grammy winner Sarah McLachlan’s musical influence stretches beyond any particular era or sound, and she’s amplified that impact by founding and developing the nonprofit Sarah McLachlan School of Music in her native Canada.

That unique effort is taking up most her time these days but McLachlan continues to work on her 10th studio album while touring with cellist Vanessa Freebairn-Smith for a series of stripped-down shows. She made her debut at Wynn Las Vegas last  year and is back for three concerts this week at Encore Theater.

“I’m definitely excited,” McLachlan says. “It’s so much fun to sort of set up camp in one place for four days, and [Encore Theater] is lovely, a beautiful room that sounds great. It’s the perfect size theater for what I’m doing, which is essentially welcoming you into my living room, singing some songs and telling stories.”

Here’s the rest of my conversation with Sarah McLachlan:

You hadn’t played a concert of your own in Las Vegas for quite a while before last year’s shows at Encore Theater. Does Vegas feel like a good fit for you these days?

Absolutely. I feel like Vegas has changed so much over the last 20 years. It’s definitely a really fun place and I actually have girlfriends coming in. They said, “You’re playing Vegas? We’re in.” The weathers’ great, there are so many amazing restaurants and all these great shows, it’s just so dynamic. I find it’s very family-friendly, too. There’s still all that decadence and rowdiness and staying up all night kind of stuff, which is really fun, but there are so many different kinds of opportunities.

How would you describe your current process in working on your new album?

I’m slowly chipping away at it. I’m also in the midst of re-creating my foundation and I’m the principal fundraiser for my music schools in Vancouver, Edmonton and Surrey. We have more than a thousand kids between the three schools and we’ve been running them for 18 years now, they’re completely free and it’s just a massive project. But it’s a beautiful thing to be a part of and we’re looking at building new strategic plans so I’ve been pretty busy with that. I also have two teenage daughters so I’m driving in circles constantly. I wear a lot of hats but they’re all super exciting. So in the middle of all that, I’m writing, but it keeps getting put off.

Has your work on the schools impacted your songwriting and music?

They are two very different buckets. There’s a lot of joy and purpose attached to the school and what we’re trying to create so it’s fulfilling in a lot of ways. There’s just a finite amount of time in the day and so I’m parsing out the time to get to everything. It influences my life and my music but it’s a bit of an intangible thing.

Maybe being a mom is more impactful on your creativity.

Well, that’s slowed everything down exponentially. [Laughs.] They are my number one focus but they’re so amazing. My 17-year-old is like the polar opposite of me, as far as her sense of self-worth. Even at 17, she’s such a power. I think back to when I was that age and I can’t believe how much farther along she is than I was and it’s been amazing to witness and be a part of both of them growing up. I’ve written about it and will continue to, although they [say things] like, “Mom! Stop writing songs about me!” I can’t make it obvious.

A review of one your recent shows contained a line about your influence on younger artists, suggesting there might not be a Billie Eilish without Sarah McLachlan. How do you feel about playing that role of an influential artist?

Pride. I’m honored to be included in that conversation. I think it’s always a lot of artists, never just one person, but if I’m part of that, I’m honored to be included. Billie is an incredible talent all by her lonesome. She’s just got some magic thing. But [being an influence is] just one person’s opinion. I have had lots of young women come up to me over the years, especially around the time of Lilith Fair or after, and say things like, “You showed me I could do anything I wanted to do if I set my mind to it and now I’m running a company.” And with stories like that, it’s never one reason behind someone being successful. She probably busted her butt for a long time and went to school and all the stars aligned, but if I had a little hand in that, that’s a beautiful thing.

Are there other young musicians you really appreciate right now, maybe some your daughters have pointed out to you?

Billie is the perfect example of this phenomenon, coming up so young and having this strong voice and whole feel with her music that is so unique and different from everything else. And she’s a breath of fresh air for me because I’ve been inundated with EDM and trap in the last few years from [my daughters]. It’s so nice to have something with a melody I can hold on to in the car ride from school. I love Lizzo. I love H.E.R. Maggie Rogers is great, she’s got a pretty cool vibe. But I’ve been living under a rock. Most new artists I know because of my daughters.