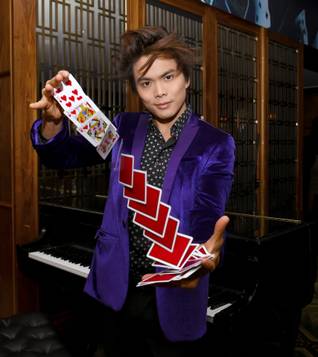 Shin Lim celebrated the extension of his Mirage residency at the resort’s Parlor Cocktail Lounge on October 30.

Shin Lim has officially arrived as a Las Vegas headliner.

When the 28-year-old sleight of hand artist first played the Strip last November on top of the annual “America’s Got Talent Live!” bill, the show sold out all five performances. The two-time “AGT” champ opened his own engagement this summer at the Mirage and sold out another series of shows at the Terry Fator Theatre.

Last week, Lim and MGM Resorts announced his innovative “Limitless” show has been extended through June 2020 with dozens of dates planned for the first half of the year. His success at the Mirage is a remarkable accomplishment considering that theater already hosts two different, very popular headlining shows from Terry Fator and Boyz II Men as well as the rotating Aces of Comedy stand-up series.

Lim has staked out his own space in the 1,256-seat room in the same way he captivated TV audiences on the ubiquitous talent competition show. His act is all his own, an exceptionally dramatic presentation of traditional close-up magic. Also a classically trained pianist, Lim has constructed a mind-boggling experience around card tricks and it’s no easy task. But his precisely choreographed and thoughtfully soundtracked routines leave the audience amazed. Lim doesn’t claim to be a magician but his show is one of the most magical experiences on the Strip today.

“Limitless” also gets a big boost from Scottish mentalist Colin Cloud, who’s been touring and performing with Lim for years. Cloud’s spirited and snappy style, which involves plenty of hilarious interaction with the audience, is a perfect contrast to Lim’s calm focus. And Cloud’s mind-reading feats are just as impressive as Lim’s dexterous moves. The two take turns astounding the room, creating a fast-paced production that feels fresh and different from every other show in Las Vegas right now, magic-based or otherwise.