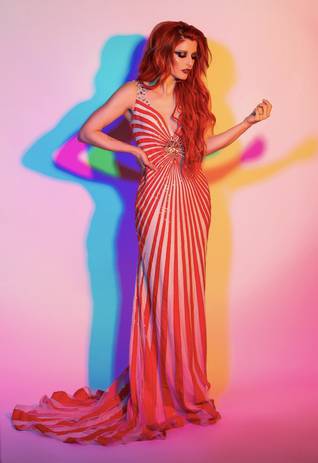 You can see Anne Martinez sing these days with the Red Penny Arcade at the Grand Canal Shoppes.

Las Vegas-based singer and producer Anne Martinez was looking ahead to a very busy 2020 when things suddenly changed. The jazz band she fronts, Red Penny Arcade, was picking up gigs left and right, which she balanced with singing jobs in “Fantasy” and “The Terry Bradshaw show” at Luxor while developing new show projects she was hoping to launch this year. And she was starting the spring leg of her solo concert tour playing in Bora Bora when the coronavirus began to affect her industry.

“It was quite a hit,” Martinez says of the entertainment shutdown. “But I just absolutely refuse to let this get me down. You wake up some days thinking, what are we going to do? I know I have no control over certain things, but what I do have is my mind and my soul and what I love to do, and I’m going to focus on that and create as much as I can, as much as I want to every day. That way when things are starting to open up, I’m going to be ready with new material and new things because Vegas is going to be different. So how do we entertain people now?”

On the latest episode of the Sun on the Strip podcast, the genre-defying singer who has performed in “Baz,” “Pin-Up,” “Showstoppers,” “Alice: A Steampunk Concert Fantasy” and other Vegas shows talks about her Red Penny Arcade gig entertaining tourists from St. Mark’s Square at the Grand Canal Shoppes at the Venetian, her recent weekend performances at the Vegas Room, covering the Billie Eilish-penned theme song from the upcoming James Bond flick “No Time to Die” and her September 19 pay-per-view concert with friend Lisa Marie Smith the two female vocalists are producing at the Space.

“Before I moved here … I came for six weeks to do a production of ‘Jekyll & Hyde’ and she was in the cast,” Martinez says of Smith. “We’ve always been close. She took over for me after I opened ‘Pin-Up’ and I joined ‘Baz’ three weeks after opening when she was there. We’ve always talked about doing something together and we’ve been bouncing projects back and forth.

“We both really are driven by the lyrics of a song and the story of it. What was the writer trying to say? What do people feel when they hear this song? Everything that we picked and the arrangements we made [for this show] are extremely thought-out. It’s all there for a reason.”