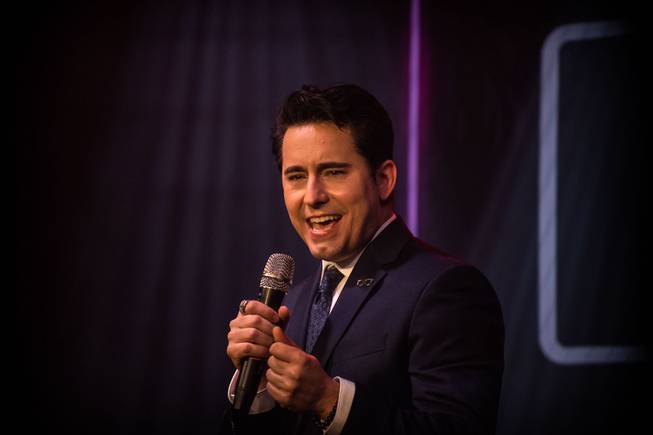 John Lloyd Young returns to the Space on May 1 with an all-request show.

He’s known for singing in the style of Frankie Valli in the Broadway and big-screen versions of “Jersey Boys,” but John Lloyd Young does a lot of different things well. He’s going to put his full range on display in his latest concert and livestream show from the Space on May 1.

“This is the first time in the 15 years or so that I’ve done solo concerts that I’ve ever put it out to the audience to say, what do you want me to sing?” he says in the latest episode of the Sun on the Strip podcast. “I’ve actually realized this makes it so much easier for me, and wondered, why did it take me that long to do this?

“There will be some surprises but I was more surprised by what didn’t end up on the request list. It’s like someone let me out of jail. There weren’t the big ‘Jersey Boys’ Four Seasons songs on the list, which means my audience now is accepting John Lloyd Young for John Lloyd Young. That’s pretty exciting.”

That’s not to say there won’t be any Frankie Valli and the Four Seasons tracks in the show, titled “By Request: Live From Las Vegas.” And Young remains happy to sing those songs. But he’s really looking forward to interacting with his fans and followers by playing their favorites and actually interacting with a limited live audience at the Space.

Young has been performing regularly at the off-Strip entertainment venue for years and throughout the pandemic, even when his shows were livestream only.

“The Space is so appropriate for distancing and all this stuff because it’s self-contained, and whatever is happening there is the only thing that’s happening there. It’s not like you’re walking through a big hotel lobby to get to the show,” he says. “And when it was made into more of a soundstage for those livestreams, it was the perfect antidote to the disappearance of live performance across the board for everybody. It’s a lifeline.”

Young says he’s optimistic about the impending return of live music across the country, but he’s also realistic about what it might feel like for artists and audiences to get back to the thing they love most after more than a year without it.

“My prediction that I think will come true is once you can get out and do it successfully, get out in front of an audience again and get that applause, I think people are going to feel revitalized and feel a deep appreciation for being able to perform that maybe we didn’t have before.”