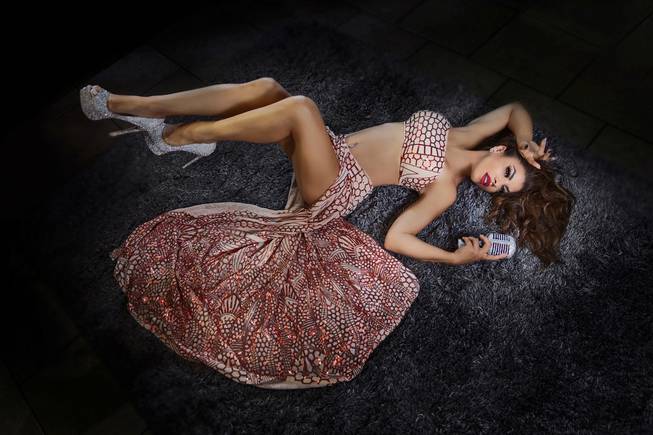 Nieve Malandra is performing online from home these days while maintaining the online store for her Nieve Malandra Boutique near Summerlin.

It’s no surprise that Nieve Malandra has managed to stay busy during the temporary shutdown of live entertainment in Las Vegas. The Bay Area native was booked solid through June at various venues on and off the Strip before the pandemic interrupted everything, including recurring gigs at the Barrymore, Chinatown bar the Golden Tiki and different hot spots at Park MGM.

On the latest episode of the Sun on the Strip podcast, the singer says she really started to build that work ethic when she left San Francisco for Los Angeles.

“I come from an academic family and I was totally the black sheep. I wasn’t ever given the message that this is a real career or that you could do something with it, and I really struggled with it for a long time,” Malandra says. “When I went to L.A. I really found myself and liked being in a culture where there were so many other entertainers and performers who were making a living like that. I was working six nights a week and doing hair during the day, which is what I’ve always had to do, just to make the rent. And when I came out here, I was really welcomed and treated so well by the Las Vegas music community and the community in general.”

And she was accustomed to hustling for gigs and working hard on other projects. That’s why Malandra has been seen and heard so many times recently at so many different venues around the Vegas Valley. During the shutdown, she’s been performing regularly on Facebook Live and recently participated in Park MGM’s Wednesday Spin, another live streaming event.

“When they asked me to do that I was ecstatic, and then there was something like 40,000 views and I couldn’t believe it,” she says. “It’s a really good way to keep everybody creative and stay working, and remind people about Mama Rabbit and On the Record so when we go back there, everyone will remember [those venues] are still here.”

Malandra has also been focusing on her retail store, Nieve Malandra Boutique, and promoting online sales in recent weeks. The pandemic hasn’t stopped her from releasing a new line of apparel for spring including some stylish face masks.