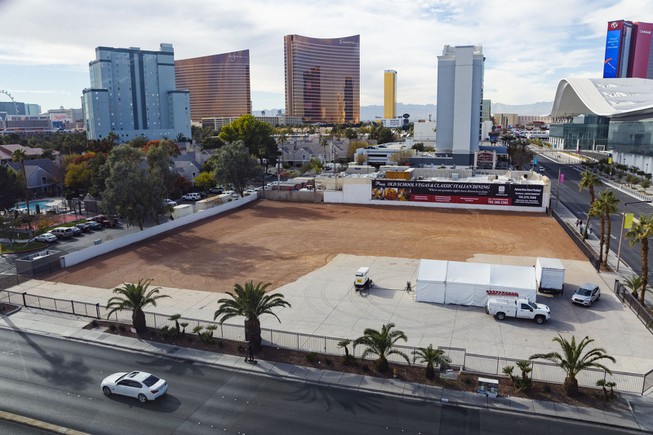 Magician Jay Owenhouse would make this empty lot at Paradise Road and Convention Center Drive the future site of his show featuring tigers — if he can get government approval to move forward. 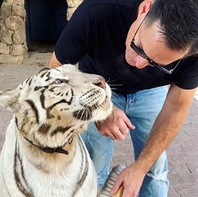 Magician Jay Owenhouse, shown with one of his tigers, to hoping to bring a magic show and tiger sanctuary to Las Vegas.

Three tigers could be calling Las Vegas home for a year, living in a temperature-controlled sanctuary with waterfalls and swimming pools on a parking lot just off the Strip, if an illusionist gets the necessary permits for his magic show.

But he must pass the scrutiny from both the county and animal advocacy groups, assuring them that both the public and the tigers will be safe.

Magician Jay Owenhouse is looking to bring a magic show and tiger sanctuary near Paradise Road and Convention Center Drive, but he first must get the approval of the Clark County Commission later this month. The Winchester Township Advisory Board last week voted to recommend the commission not approve the proposal.

The sanctuary would consist of two 900-square-foot containment areas, each with a sleeping cave and a ground pool, and it would be secured by a 10-foot-high wooden security fence, with an additional foot of barbed wire and a wire roof enclosure.

Owenhouse did not return a call for comment, but at the Winchester Town Advisory Board meeting last week said he was a “passionate animal advocate” and that his tigers were a part of his family. He says he has never purchased a tiger but has adopted ones that needed homes.

The tigers lived with him at his house in Montana for their first six months before they moved outside to his tiger sanctuary that he started 26 years ago, he said.

“Our tigers don’t live in cages,” he said. The sanctuary on site will be climate controlled and will allow them to live and “walk to work” instead of having to deal with the stress of traveling, he said. He also added that the three tigers would each only be on stage for four minutes during the show.

He intends to operate the show for one year in a tent that’s 82-feet high and 2,352-square feet. The lot on which the animals would be housed is owned by the World Buddhism Association Headquarters.

Clark County staff expressed concern about the proximity of the show to adjacent properties, which include family residential developments, according to the Winchester Town Advisory Board agenda packet.

Should the county commission approve the request, Owenhouse must prove that the areas around the property will not be negatively affected and that the facility would be supervised 24 hours a day. The tiger enclosure must have a double-door system to prevent escape. He must also immediately notify Metro Police and the Clark County School District Police if any animal escapes. He must also provide Animal Control with information about the animals, including their ages, health and history of aggression, and a current color photograph of each animal.

An animal control officer also will inspect the premises before the show opens to the public as well as at any reasonable time.

People for the Ethical Treatment of Animals (PETA) and CompassionWorks International have expressed opposition, and asked that the county deny Owenhouse’s application.

“Tigers are solitary hunters who should be swimming in jungle streams, not pacing inside parking lot cages,” Rachel Mathews, PETA Foundation director of captive animal law enforcement, said in a statement. “PETA is calling on officials to make Jay Owenhouse’s bid for an out-of-touch magic show and tiger tent disappear.”

The groups are concerned about the tigers being in the parking lot during the hottest part of the summer, subjecting the tigers to “oppressive heat” as well as noise from the monorail station, a condominium complex and busy intersections.

Others at the advisory board meeting brought up concerns about public safety and were worried that a tiger could hurt someone.

Owenhouse, a part-time Las Vegas resident, has one of the largest touring illusion shows in the country with his “Dare to Believe” show, and his performances include illusion acts originally done by Harry Houdini.

Owenhouse’s shows often also feature his children and his tigers, which he reportedly got from breeder Doc Antle, who was featured in Netflix’s docuseries “Tiger King.”

On May 3, 2019, a video showed that there was not enough distance or barriers in place between a tiger and the public, according to the USDA inspection report.

“Because of the strength and speed of tigers, there is an inherent danger present for both the viewing public and the exhibited animal where there is any chance that the public could come into direct contact with juvenile or adult tigers,” the report says.

USDA Animal Care inspectors ordered that Owenhouse make sure from that point forward that all animals are exhibited with barriers and/or sufficient distance from the public.

The commission is scheduled to hear Owenhouse’s request at its Dec. 22 meeting.