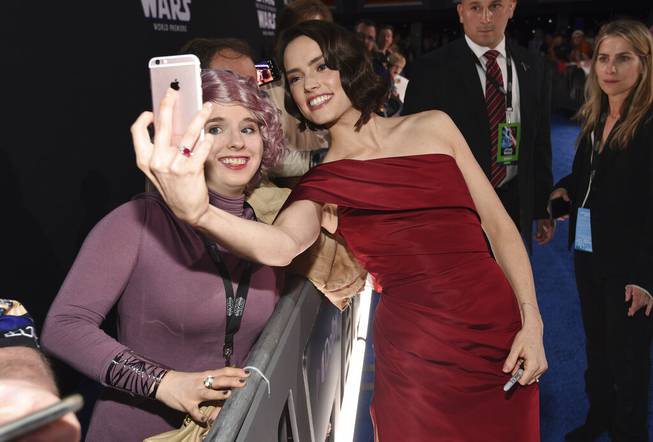 Daisy Ridley, right, takes a selfie with a fan as she arrives at the world premiere of “Star Wars: The Rise of Skywalker” on Monday, Dec. 16, 2019, in Los Angeles.

LOS ANGELES — Stormtroopers marched and Chewbacca stepped out of a black sport utility vehicle to cheers as “Star Wars” made its triumphant return Monday for the world premiere of its latest installment, “The Rise of Skywalker.”

Fans formed a living tribute to the franchise alongside the blue carpet on Hollywood Boulevard where series stars Daisy Ridley, John Boyega, Adam Driver and others would arrive. Fans dressed as Luke Skywalker and Princess Leia dotted the crowd, eagerly awaiting the event’s start among an assortment of Stormtroopers, bounty hunters and an imposing Darth Vader.

The premiere will be the first time anyone outside a select group will see the ninth film in the core “Star Wars” story. “Rise of Skywalker” arrives in theaters Friday. Attendees had a chance to walk past an exhibit lined with numerous photos from previous films including a portrait with the late Carrie Fisher and her daughter Billie Lourd, another photo with Mark Hamill hugging Fisher and several Stormtrooper uniforms.

Few films have captured the popular imagination like 1977’s “Star Wars,” which has sparked three film trilogies, TV shows, toys and more. “The Rise of Skywalker” is one of the year’s most-anticipated releases, in part because filmmakers have promised a conclusion to the story of the Skywalker clan that includes Luke, Leia and their father Anakin, who became Darth Vader.

Disney paid more than $4 billion to acquire the Star Wars franchise in 2012 and the recent trilogy started with J.J. Abrams’ “The Force Awakens” in 2015. While it returned beloved characters from the original trilogy to the big screen for the first time since 1983, the story has focused on a new generation of characters played by Ridley, Driver, Boyega and others.

Fans remain divided on 2017’s “The Last Jedi,” which showed a late-in-life Skywalker as a bitter recluse who cut himself off from his friends and broader conflicts embroiling the fictional far, far away galaxy.

Disney has not yet announced film plans post-“Rise of Skywalker.” Work on a trilogy set outside the Skywalker story has been halted, and no new stand-alone films have been announced since the poor showing of 2018’s “Solo: A Star Wars Story.”

Regardless of the reception to “Rise of Skywalker,” Disney has already delivered Star Wars fans two wins in 2019. Its theme parks in Florida and California opened massive Star Wars-themed expansions this year where guests are essentially transported to a distant planet. The company’s new streaming service, Disney Plus, also debuted the first live-action “Star Wars” television series in “The Mandalorian,” which introduced a popular new character: Baby Yoda.