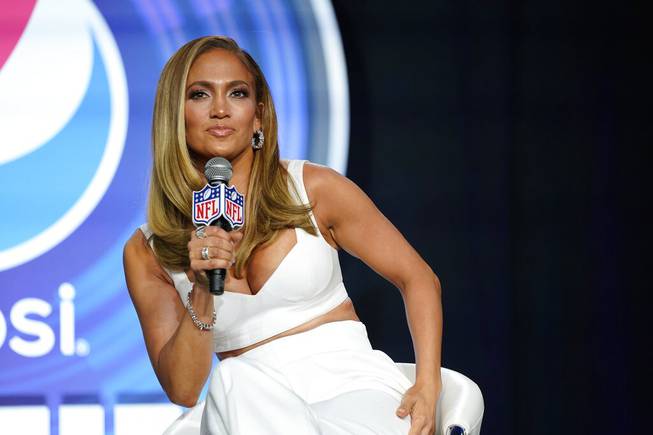 In this Jan. 30, 2020 file photo, NFL Super Bowl 54 football game halftime performer Jennifer Lopez answers questions at a news conference in Miami. Lopez will give a musical performance on the West Front of the U.S. Capitol when Biden is sworn in as the nation’s 46th president next Wednesday.

Inauguration officials announced on Thursday that the glittery duo would appear in person on Jan. 20, with Gaga singing the national anthem as Joe Biden and Kamala Harris are sworn in on the West Front of the U.S. Capitol, and Jennifer Lopez giving a musical performance.

Despite a raging pandemic that is forcing most inaugural events online, it was a sign that Hollywood was back and eager to embrace the new president-elect four years after many big names stayed away from the inauguration of President Donald Trump, hugely unpopular in Hollywood.

The question: How would the star wattage play across the country as Biden seeks to unite a bruised nation? Eric Dezenhall, a Washington crisis management consultant and former Reagan administration official, predicted reaction would fall “along tribal lines.”

“I think it all comes down to the reinforcement of pre-existing beliefs,” Dezenhall said. “If you’re a Biden supporter, it’s nice to see Lady Gaga perform.” But, he added, “what rallied Trump supporters was the notion of an uber-elite that had nothing to do at all with them and that they couldn’t relate to.”

Presidential historian Tevi Troy quipped that the starry Gaga-J. Lo lineup was not A-list, but D-list — “for Democratic.”

“When Democrats win you get the more standard celebrities,” said Troy, author of “What Jefferson Read, Ike Watched and Obama Tweeted: 200 Years of Popular Culture in the White House.”

“With Republicans you tend to get country music stars and race-car drivers.” Referring to Lady Gaga’s outspoken support for the Biden-Harris ticket, he said he was nostalgic for the days when celebrities were not so political.

“Call me a hopeless romantic, but I liked the old days when Bob Hope or Frank Sinatra would come to these events and they were not overtly political,” he said.

Still, he said, Biden’s unity message won’t be derailed. “In the end, I don’t think having Lady Gaga or J. Lo is all that divisive,” he said.

Attendance at the inauguration will be severely limited, due to both the pandemic and fears of continued violence, following last week’s storming of the Capitol.

Outside the official events, one of the more prominent galas each inauguration is The Creative Coalition’s quadrennial ball, a benefit for arts education. This year, the ball is entirely virtual.

But it is star-studded nonetheless: The event, which will involve food being delivered simultaneously to attendees in multiple cities, will boast celebrity hosts including Jason Alexander, David Arquette, Matt Bomer, Christopher Jackson, Ted Danson, Lea DeLaria, Keegan Michael-Key, Chrissy Metz, Mandy Patinkin and many others.

Robin Bronk, CEO of the non-partisan arts advocacy group, said she’s been deluged with celebrities eager to participate in some way. The event typically brings in anywhere from $500,000 to $2.5 million, and this year the arts community is struggling like never before.

Bronk noted that planning has been a challenge, given not only the recent political upheaval in the country but also the gravity of the coronavirus pandemic. Given all that, did a celebration make sense?

“I was thinking about this when we were trying to phrase the invitation,” Bronk said. “Do we celebrate? This is the most serious time of our lives.”

But, she said, especially at a time when the arts community is suffering, it’s crucial to shine a spotlight and recognize that “the right to bear arts is not a red or blue issue. One of the reasons we have this ball is that we have to ensure the arts are not forgotten.”

The Presidential Inaugural Committee also announced Thursday that the invocation will be given by the Rev. Leo O’Donovan, a former Georgetown University president, and the Pledge of Allegiance will be led by Andrea Hall, a firefighter from Georgia. There will be a poetry reading from Amanda Gorman, the first national youth poet laureate, and the benediction will be given by Rev. Silvester Beaman of Bethel African Methodist Episcopal Church in Wilmington, Delaware.

On the same platform, Biden sat in 2013 behind pop star Beyoncé as she sang “The Star-Spangled Banner” at President Barack Obama’s second inauguration. James Taylor sang “America the Beautiful,” and Kelly Clarkson sang “My Country, ’Tis of Thee.”

At Trump’s inauguration in 2017, the anthem was performed by 16-year-old singer Jackie Evancho. A number of top artists declined the opportunity to perform at the festivities, and one Broadway star, Jennifer Holliday, even said she’d received death threats before she pulled out of her planned appearance.

There was indeed star power in 2017, but most of it was centered at the Women’s March on Washington, where attendees included Madonna, Julia Roberts, Scarlett Johansson, Cher, Alicia Keys, Katy Perry, Emma Watson and many others.

This year, signs are that Obama-era celebrities are returning. Dezenhall said that in the end, it’s logical for organizers to go with the biggest talent.

“Lady Gaga is as big as you can get, and she is very talented,” he said. “If I were being inaugurated and I could have Lady Gaga, I would take it.”