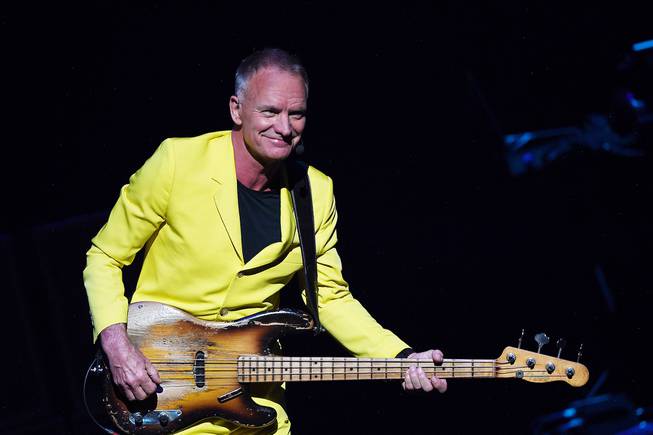 Sting performs during opening night of his “My Songs” residency at the Colosseum at Caesars Palace on October 29.

Sting’s “My Songs” headlining residency at the Colosseum was first announced way back in April 2019, months before Celine Dion wrapped up her shows in the groundbreaking venue at Caesars Palace that was built for her first Las Vegas Strip production. Also a legacy artist with multiple Grammys, plenty of other accolades and dozens of familiar hits, Sting is definitely one of the biggest acts to line up a Vegas residency in recent years.

When he was finally able to launch his Colosseum concert series Friday night, the 70-year-old singer, songwriter, actor and activist dove immediately into the music, instantly satisfying fans who had been waiting 17 months for this show to become reality.

“I wanted the show to be authentic to me and who I am, but the way the show is presented, it’s a spectacular,” Sting said Saturday during a conversation in a villa at Caesars. “The state-of-the-art visuals are something Vegas audiences will love, but it’s also me, and they hear the story of my life through these songs. Having that visual context changes them slightly, it makes them grow a little bit.”

Sting performs during opening night of his “My Songs” residency at the Colosseum at Caesars Palace on October 29.

The show was conceived based on his “My Songs” album, released in May 2019, which features new renditions of some of his most beloved tracks. Sting said the Vegas production didn’t change much during the long pandemic-caused delay, with those stunning visuals still adding new dimension to familiar songs like “Englishman in New York” and “Every Little Thing She Does is Magic.”

“I think people come to Vegas to hear the songs they know and love. That’s comforting for everyone and I would never argue with that or not comply with that,” he said. “But I also demand people listen to something that’s new, so I tried two new songs last night from the new album, just to test the water. It’s hard to introduce new material but you have to take the plunge.”

The new additions were “Rushing Water” and “If It’s Love,” and both seamlessly spilled into the sequence of the show because they sound distinctively like Sting. His 15th studio album “The Bridge” will arrive on November 19, written and recorded over the course of the pandemic year when his typical cycle of writing, recording and touring was disrupted by COVID.

“The pandemic cut me off in the middle of my touring schedule, so I went home — I have a studio at home — and I just moved the cycle forward,” he said. “I had no idea what I was going to write … but I just put the work in. I turned up at 10 in the morning and worked through until dinner, and some days you get nothing, like fishing. A few days later you might catch a fish, and you cook it and see what happens. After a year I had about 12 or 14 fish, I strung them together, and we have an album.”

Next month his fans will get the full experience of Sting’s pandemic-year album, which dabbles in different genres and deals with themes of loss, separation and turmoil. But for now, he’ll be joyfully performing at the Colosseum, with shows scheduled for November 3, 5, 6, 10, 12 and 13. He has eight more concerts on the books for June.

“I’ve used my time here very well. I’ve seen a lot of shows,” he said of his opening weekend on the Strip. “I saw Lionel Richie [and] it was fantastic. I saw … ‘Absinthe,’ which I adored. It’s very rude, very sexy and funny. Then I was blown away by Lada Gaga the other night, she really did it. That girl can do anything, and I’ve known her a long time, but this is another level.”

His October 29 debut at Caesars didn’t feel like opening night; it felt like the perfect headlining concert show for this storied Vegas venue, a performance from an artist and band with absolute confidence and ability. Much of the audience was standing, dancing and singing along all night to “Message in a Bottle,” “Wrapped Around Your Finger,” “King of Pain,” “Every Breath You Take” and two different versions of “Roxanne.”

“The first night was hugely important for me and the band, and the audience,” Sting said. “Excitement was an understatement. It felt like release. I consider the stage my living room; This is where I know where all the furniture is, where I feel very comfortable, and it was lovely to get back to that.”