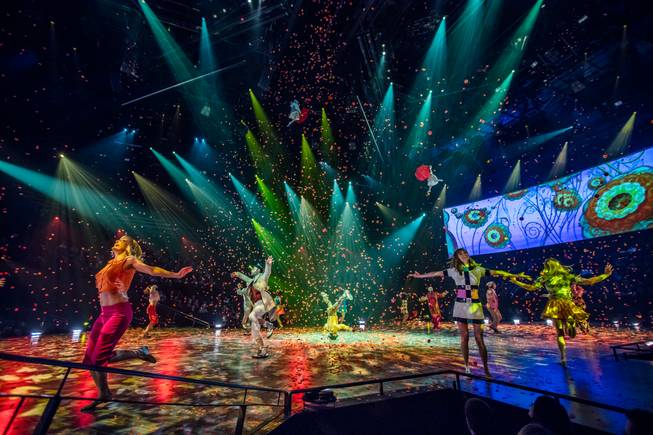 The cast performs during “The Beatles Love by Cirque du Soleil” show at the Mirage, July 14, 2016 in Las Vegas.

Which Cirque du Soleil Las Vegas show is best for kids and families? The folks at Cirque would probably steer you toward “Mystére,” the longest running show in the Canadian entertainment company’s catalog, and that’s a solid choice. But my current top recommendation for this specific audience — and keep in mind, I’m the favorite uncle of 10 little ones — is definitely “The Beatles LOVE” at the Mirage. It’s as awe-inspiring as any show on the Strip. It’s wildly colorful and fast-paced. Its familiar soundtrack inspires a lot of emotion in observers of all ages. And there are actually kids in the show, which always helps.

You must be 5 years or older to attend “LOVE” and those under 18 must be accompanied by an adult. It’s also a bit pricier than “Mystére” and some of the other kid-friendly shows on the Strip with tickets starting at $79. But if you’re planning a family outing to a Vegas show, don’t you want it to be an unforgettable event for everyone involved? That’s the best way to describe this show.

The theater in the round is instantly fun and exciting, and every seat offers an intimate experience because of the brilliant design and technical capability of the venue. The stage and performers feel like they’re within your reach even if you’re sitting in the back row, and if you’ve already seen “LOVE,” you know there’s at least one moment of frenzied interactivity that makes everyone in the audience smile.

For the grown-ups or the little ones already into music, “LOVE” will be one of the most powerful entertainment experiences in Las Vegas. The show’s soundtrack has won three Grammy Awards and its theater was built to be the best possible audio environment to consume the Beatles’ music. There are two speakers in the headrest of each and every seat and there’s a mobile speaker setup for ticketholders who watch the show from a wheelchair.

These classic, highly influential songs obviously transcend different generations. The incredible feat is how Cirque has built an iconic show on the foundation of music and added something special to the Beatles’ body of work in the process. Now in its 14th year at the Mirage, “The Beatles LOVE” is easily one of the most popular shows in the history of the Strip and it wouldn’t have lasted so long if tourists were the only ones buying tickets.