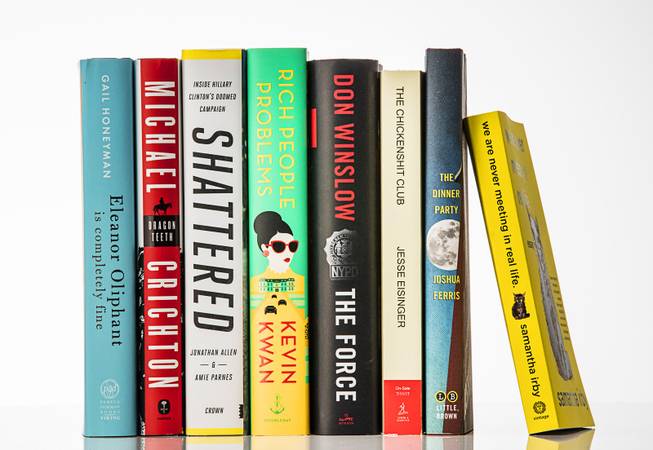 NEW YORK — On a sunny afternoon in late April, the day before the opening of Books Are Magic in Cobble Hill, Brooklyn, the novelist Emma Straub was apologetically shooing away potential customers.

A woman with a dog poked her head in the door, which was still being painted, to say that “there has never been more buzz” about a store opening in the neighborhood. Straub, an owner of the bookstore, told her the place was dog-friendly and invited her to come back when it opened.

The space, a former clothing boutique on Smith Street, still smelled like fresh paint and sawdust. By the register were shelves full of new fiction and nonfiction and a bookcase dedicated to eclectic titles published by The New York Review of Books. Nearby, the fiction section held a mix of contemporary works and classics, including two editions of “Middlemarch,” Straub’s favorite novel.

Staff picks sat on the opposite wall — Straub, 37, had recommended “Magic for Beginners,” a collection of short stories by Kelly Link. Down a few stairs, a separate bright, airy room with exposed brick walls, wooden rafters and a skylight was filled almost entirely with children’s books.

“This is the best part of the store,” Straub said, as she climbed into an octagon-shaped wooden reading nook for kids.

Cobble Hill has been without a bookstore since BookCourt, a beloved neighborhood institution, closed at the end of last year. Neighborhood residents were stunned to lose the store, which had been a community hub and literary gathering spot for 35 years.

Straub, who used to work as a bookseller there, was especially distraught. It “was my absolute favorite place to be,” she said.

She and her husband, Michael Fusco-Straub, asked if they could take over the store, but the owners had decided to sell the buildings. So the couple opened a shop nearby.

Books Are Magic is opening in the midst of a renaissance for independent booksellers. The American Booksellers Association counted 1,775 members around the country in 2016, up from 1,410 in 2010. And Straub is joining a small but growing club of novelists who moonlight as booksellers — their ranks include Larry McMurtry, Louise Erdrich, Ann Patchett, Judy Blume and Jeff Kinney.

Straub retained a few touches from BookCourt, including the blond wood shelves, which she salvaged. “The whole point of a bookstore is to help people discover something new,” she said.

In the spirit of driving discovery, we asked Straub and five other novelists in the independent book business what they are reading and recommending to customers this summer. Here are their selections.

AUTHOR OF “Modern Lovers” BOOKSTORE: Books Are Magic in Brooklyn

“The Twelve Lives of Samuel Hawley” by Hannah Tinti. “She’s one of those people you can forgive for taking her time between books, because they’re so satisfying.”

“Saints for All Occasions” by J. Courtney Sullivan. “It’s fabulous and smart and feels bigger than her other books.”

“Mrs. Fletcher” by Tom Perrotta. “He’s coming here to have a signing and talk to Megan Abbott. This is what’s so fun about having a bookstore. I get to force all these writers I love to come here and have conversations with other writers I love.”

“Chemistry” by Weike Wang and “The Leavers” by Lisa Ko. “These debut novels couldn’t be more different, but they each tell the story of a first-generation Chinese-American whose life turns in directions I never saw coming. ‘”Chemistry” appears to be a romantic comedy (it’s funny, it’s romantic), but it just gets deeper and darker and richer by the page. ‘”The Leavers” is a gritty and painful story of immigration in which the American dream is constantly re-examined alongside the Chinese dream. Here’s another thing Wang and Ko have in common: They are both wonderful writers who have written two of this summer’s best novels.”

“Broken River” by J. Robert Lennon. “For years now my most reliable beach reading has been Ross Macdonald and Barbara Pym, in old paperbacks that are only improved by salt air and potato-chip-greasy fingers. Both write books so similar to one another that I’m never sure whether I’m rereading one I’ve read two or three times before — another symptom of age — but I’m always heard laughing sharply aloud at the precision of the insights or murmuring in pleasure at the freshness of the storytelling.

If I was at the counter of a new bookstore, however, the title I’d stack up by the register this summer is J. Robert Lennon’s “Broken River,” which I had the luck of reading in galleys. It’s a tense, surprising thriller, with perverse overtones of the Coen brothers variety, but containing an enigmatic narrative device, a kind of ‘”haunting of the point-of-view” — one which proves, as ever, that the novel can do things nothing but the novel can do. I’m almost ready to reread it.”

AUTHOR OF The best-selling “Diary of a Wimpy Kid” series

“Papi” by David Ortiz and Michael Holley. “Big Papi is a Boston icon, and I can’t wait to dig into his memoir, which was co-authored by another sports icon, Michael Holley.”

“Radical Candor” by Kim Scott. “Scott’s experiences leading teams at Google and Apple led to this book, which espouses a workplace culture where leaders care deeply about their employees and challenge them to be their best selves.”

“Dog Man: A Tale of Two Kitties” by Dav Pilkey. “The ‘Dog Man’ series has caught fire, with the first two books taking residence on The New York Times best-seller list. Pilkey is the king of kids’ comics.”

“Borne” by Jeff VanderMeer “The cover alone had me hooked. Is the protagonist a plant? An animal? Something in between?”

“Al Franken: Giant of the Senate” by Al Franken. “Flips the classic born-in-a-shack rise to political office tale on its head. I skipped meals to read this book — also unusual — because every page was funny. It made me deliriously happy to learn that Franken has outlawed the word ‘robust’ in his office.”

“Standard Deviation” by Katherine Heiny. “About a perfectly mismatched New York City couple whose son, with autistic tendencies, is an origami prodigy. Both heart-piercing and, crucially, very funny.”

“The Futilitarians” by Anne Gisleson. “About an Existential Crisis Reading Group with a secret handshake.”

“The Song Poet”’ by Kao Kalia Yang. “The exquisite story of Kao Kalia Yang’s father, village life, war life, refugee life, then a St. Paul housing project; America’s secret war in Laos; and a people’s history as sung by Bee Yang and remembered in fascinating and poetic detail by his daughter.”

AUTHOR OF “Are You There, God? It’s Me, Margaret”BOOKSTORE: Books & Books in Key West, Florida.

“What to Do About the Solomons: by Bethany Ball. “There’s nothing more exciting as a bookseller (or a reader) than discovering a new writer who creates memorable characters in a setting we don’t see every day. Funny, sexy, and smart.”

“All Grown Up” by Jami Attenberg. “I read it twice, laughing, cringing, and even tearing up.”

“Sunshine State” by Sarah Gerard. “Our customers always ask for anything set in Key West. This is the next best thing — all of Florida. And it’s got a great cover.”

Two illustrated books for all ages:

“Some Writer! The Story of E.B. White” by Melissa Sweet