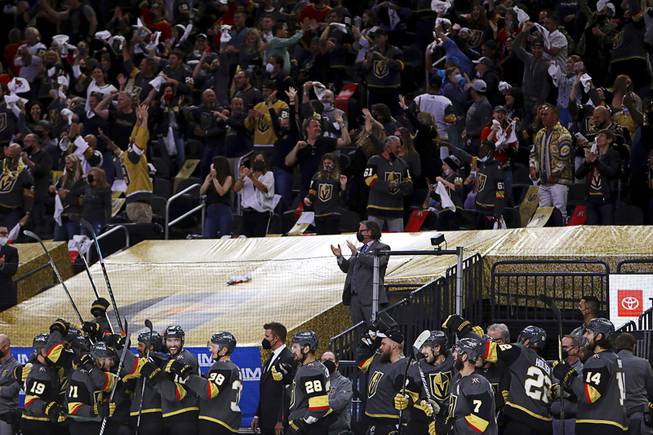 The Vegas Golden Knights bench celebrates the team’s final goal against the Minnesota Wild during the third period of Game 7 of an NHL hockey Stanley Cup first-round playoff series Friday, May 28, 2021, in Las Vegas.

Vegas’ return to a full building coincides with Clark County’s edict that COVID-19 restrictions will be lifted on June 1. Dates for the Golden Knights’ second-round series with the Avalanche have not been announced, but Game 1 is Sunday, so Game 3, the first home game of the series, would not be until after June 1.

The Golden Knights hosted four playoff games in first-round series with the Wild, starting with 8,683 fans for the first two games and reaching 12,156 fans in the final two games. A full-capacity T-Mobile Arena holds about 18,000 for hockey.

It’s also possible that vaccinated attendees will not be required to wear masks, following guidance from the Centers for Disease Control and Prevention and the NHL. Despite CDC guidance earlier in the month, the league still enforced mask-wearing at arenas until it released new guidelines yesterday.

As of Saturday morning, the team had not announced an updated mask policy.

The Golden Knights are guaranteed at least two home games — Games 3 and 4 — at home against the Avalanche. Those games are expected to start later next week, and Game 6 would be at home as well, if it become necessary.

Games 1 and 2 will be played at Ball Arena in Denver, as will Games 5 and 7, if necessary.