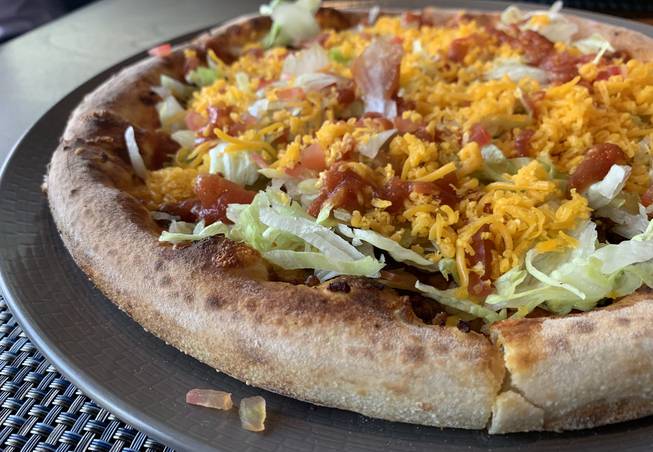 The Wolfgang Puck Bar & Grill at Downtown Summerlin has officially reopened as Wolfgang Puck Players Locker and the new version is … not that different. In fact, the bar area I’ve frequented since it opened in 2014 has done away with the framed Vegas Golden Knights jerseys in favor of a sleek, silvery wallpaper, but there are two new giant-screen TVs in the bar and dining room for your hockey viewing pleasure.

The slightly renovated restaurant was created by Puck with VGK players Alex Tuch, William Karlsson, Deryk Engelland, Shea Theodore and Reilly Smith and is billed as Las Vegas’ ultimate sports restaurant. (It’s also a collaboration with Element Hospitality, of which Tuch is a member.) It remains a very comfortable dining option at Downtown Summerlin with high quality cuisine. New additions to the menu include: Tuch’s Reuben, pastrami and sauerkraut on marbled rye, Karlsson’s Vegan Burger with a Beyond Meat patty and vegan cheese and Engelland’s Fish & Chips. There are also cocktails named for players and a floor-to-ceiling display of more than 100 custom glass lockers showcases high-end spirits selected by the players and other celebrities. Some favorite dishes from the previous Puck menu are still here, including the classic smoked salmon pizza, seared filet mignon steak frites and truffle potato chips, and I’ll give two enthusiastic thumbs up for the new taco pizza, one of the best-sellers so far.

The patio at Salt & Ivy Cafe at Aria.

Mr. Coco, the luxurious bar experience created by hospitality legend Francesco LaFranconi at the Palms about a year ago, is the winner of the New Bar Concept of the Year award at this year’s Nightclub & Bar Awards. The 35th annual Nightclub & Bar Convention and Trade show is set for the Las Vegas Convention Center March 30-April 1. Want another local award winner? Steak ‘n Shake inside the South Point received the 2019 Franchise of the Year award from Steak ‘n Shake Corporate.

There’s a lot going on at Bazaar Meat by José Andrés at the Sahara. The restaurant launched its annual truffle festival on Friday, which continues through the end of truffle season in mid-February and offers guests a special tasting menu featuring black truffles at their peak potency. Curated by executive chef Alex Pitts, the menu includes the burrata cheese spoon with liquid truffle sphere, croquetas de jamón with quince and truffle and Vittore Carpaccio 2020 made with one-year-aged Snake River Farms ribeye. Tickets are $165 and can be purchased by calling 702-761-7610. On February 8, Bazaar Meat hosts an exclusive dinner featuring Flanagan Wines from Sonoma County, including an appearance from proprietor Eric Flanagan who will guide the evening’s selections of wine pairings. On the menu that night: cotton candy foie gras, geoduck with coconut cream, tortilla sacramonte, an oakwood-fired Rosewood ribeye and more. Dinner starts at 8 p.m. and tickets are $249. 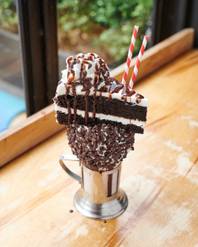 San Francisco transplant Ike’s Love & Sandwiches has opened its second Las Vegas store near UNLV at 4700 S. Maryland Parkway. A grand opening celebration is set for February 6 with free sandwiches for the first 25 Instagram followers in line starting at 10 a.m. and founder Ike Shehadeh will be onsite. He’ll also be at the Fashion show mall location making sandwiches from 11 a.m. until 2 p.m. on February 5. The UNLV restaurant has two exclusive sandwiches on the menu: the Hey Reb with fried chicken, Swiss cheese and teriyaki glaze, and a vegan version called the Nevada Southern. The new spot is open daily from 10 a.m. until 8 p.m.

Herringbone at Aria has transformed into Salt & Ivy Café and Patio Bar. The new restaurant offers all-day dining options including chicken and waffles, the Dutch baby pancake, fish tacos, steak sandwiches, lobster Puttanesca and Colorado lamb chops. It’s open daily from 6 a.m. until 10 p.m. and the timing is perfect because the massive Aria Café is closing this weekend to make way for the upcoming Din Tai Fung.

Wonderful news for vegan eaters: Black Tap at the Venetian has created its first 100 percent vegan CrazyShake milkshake. It’s called the Vegan Black N’ White CakeShake, it’s inspired by the classic black and white cookie and it’s made with chocolate soy milk, house-made vanilla frosting and chocolate chips and topped with a mega-sized slice of black and white cake, whipped cream and chocolate drizzle. Share one?