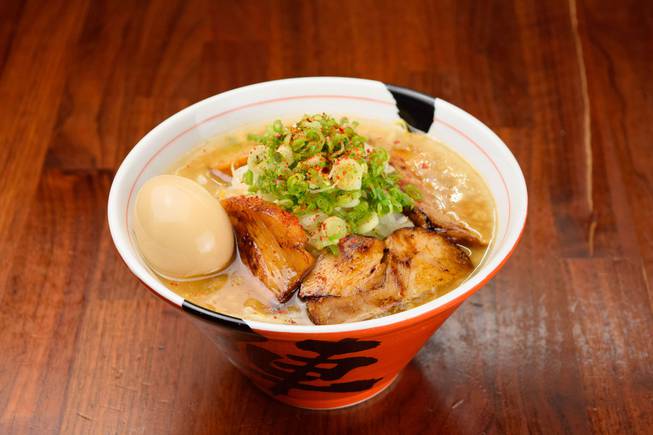 Wynn Las Vegas has finally released significant details about its first-ever Mexican restaurant, created by Enrique Olvera, Daniela Soto-Innes and Santiago Perez of the ATM Group and set to open on March 19 in the space formerly occupied by Andrea’s at Encore. It will be called Elio and it’s being described as a social dining concept “that merges exquisite service and exceptional food in an energetic environment.” Wynn President Marilyn Spiegel said “Elio will not only be a place to have dinner but a destination for your entire evening,” which sounds like the restaurant will join the twin resort properties’ other planned new arrival, Delilah, and Bellagio’s new Mayfair Supper Club in the recent Strip trend of combining food and entertainment in one destination. Small plates and appetizers will feature a heavy emphasis on seafood, the bar and lounge will showcase Mexico’s best agave-based spirits, and the menu will be “grounded in Mexico’s rich culinary traditions.” Weekend brunch will be served in Elio’s lounge and the dining room will be open nightly, and the décor will be inspired by 1940s and 1950s Mexican cinema. “Expect a festive atmosphere where design and interior details lead you to feel the elegance and simplicity of the Nevada landscape,” said Olvera. Stay on top of this development at eliolv.com.

Fremont East’s Evel Pie has a big new vegan menu including six pizzas, meatless meatballs, garlic knots, salad and “chicken” fingers and everything will be available starting on January 16 with a launch event hosted by Vegans, Baby founder Diana Edelman. Tickets for the event are $25 and a portion of the proceeds will benefit Street Dogz, a local organization that helps people without homes or in need of care for their pets. For info or reservations, call 702-840-6460. Vegans, Baby is presenting Veganuary in Las Vegas for the third year, this time with more than 30 local restaurant partners, as well as launching the month-long vegan celebration in San Diego and Portland. For a list of participating restaurants and menus, visit vegansbaby.com.

Shake Shack has brought back the ShackMeister from last year, originally created in 2014 for the South Beach Food and Wine Festival and consisting of a classic Shackburger topped with shallots marinated in ShackMeister Ale and fried until crispy. It’s joined on the menu by three new shakes: cookie butter, malted milk chocolate and frozen hot chocolate. Find your nearest Shack at shakeshack.com.

Your local Remedy’s tavern might be throwing a big party this month. The Henderson bar at 530 Conestoga Way hosts the annual Hillbilly Ball on January 25 with live music, drink specials and a costume contest. Beer specials start at $3 and Jack Daniel’s shots are going for $5, so grab your straw hat and get ready to square dance because the fun starts at 8 p.m. And the Remedy’s at 3265 St. Rose Parkway presents its third annual White Out Party, also at 8 p.m. January 25, featuring a food buffet, a DJ and cocktail specials such as the Blanc Martini for $7 and the Lucicle for $5. Be sure to wear all white and bring your ID; 21 and over only.

There’s always a lot going on at Ferraro’s. On January 25 at 5 p.m., the Italian institution’s next edition of the Taste and Learn event series spotlights winter wines from the Marches, Veneto and Piedmont regions, paired with four courses of food for $75. And on January 30 at 6:30 p.m., Ferraro’s is offering a “tour” of the Paolo Scavino Winery from Barolo with Wine Enthusiast magazine’s Winemaker of the Year Elisa Scavino. This is another four-course dinner and tasting experience featuring the cuisine of executive chef Francesco DiCaudo and the cost is $175 per person. For more information or to make your reservations, call 702-364-5300.