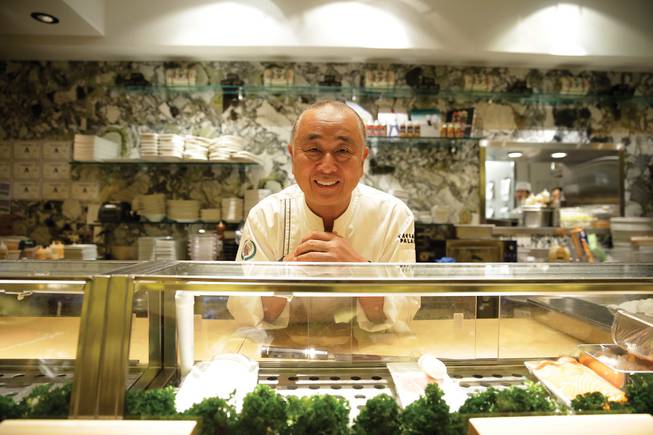 The legendary cuisine of Nobu Matsuhisa is now available in a second Strip location at Bally’s.

Sushi fanatics were happy to hear that the original Nobu Las Vegas location at the Hard Rock Hotel would survive the resort’s transition into Virgin Hotels Las Vegas. Here’s some more good news: Nobu is now open at Bally’s Las Vegas with a temporary location that is planned to operate until Virgin opens at the end of the year.

Executive chef Nolan Kline, executive sushi chef Yasushi Handa and general manager Kenny Hernandez remain at the helm of the restaurant, now open for dinner from 6 to 10:30 p.m. Sunday through Thursday and from 6 to 11 p.m. Friday and Saturday in the Bally’s space previously occupied by Sea, a Thai restaurant. It can be found in the back of the casino near BLT Steak.

Of course, the other Vegas Nobu is located across the street at Caesars Palace, at the base of the Nobu Hotel tower. The legendary restaurant’s relationship with Caesars Entertainment enabled the temporary location at Bally’s. When Virgin opens, Nobu will operate in an expanded space at the off-Strip resort. The other Hard Rock restaurants expected to return to Virgin are MB Steak and Forte Pizza, and among the new concepts coming to Virgin are an unnamed Thai restaurant from Los Angeles and the return of Todd English’s Olives, formerly located at Bellagio.

On Thursday, February 20 from 7:30 to 9:30 p.m., football star Marshawn Lynch and boxer Andre Ward will be mingling and making sandwiches at the new location of Ike’s Love & Sandwiches near UNLV at 4700 S. Maryland Parkway. The event is free and open to the public and a special $10 combo includes the choice of one of the athletes’ signature sandwiches plus chips and a drink.

Los Angeles-based celebrity chef Bruce Kalman, best known as the original co-owner and executive chef of Union in Pasadena and currently chef and co-owner of Knead & Co. Pasta Bar and Market at the Grand Central Market, will be cooking at Ada’s at Tivoli Village during a pop-up residency February 21-23. Kalman is a longtime friend of Ada’s chef and owner James Trees and will be presenting his signature dishes including porchetta with salsa verde, squid ink rigatoni with fresh lobster and more.

Prendi is now open at the Sahara. The grab-and-go eatery serves cold-pressed juices, focaccia pizzas, pastries, salads, sandwiches and more and is open daily from 7 a.m. to 7 p.m.